The Micro Fishing Rigs are packaged for tanago fishermen in Japan. they includes a complete rig:

The rig does not include a line winder or a rod.

I would recommend the Owner Bamboo Line Winder.

If you decide you really like micro fishing, eventually you will want to buy more hooks, more floats and some #10 split shot and some light tippet to make your own rigs. The kit is a nice way to get started, though.

This video shows the benefit of having the little brightly colored beads on the line beneath the float. They clearly show when a fish has taken the bait and swims to the side. A float by itself only moves if the fish takes the bait and goes down, pulling the float under, or moves far enough to the side to pull the float sideways. The beads show sideways motion immediately.

Within the first 20 seconds of the video, you can easily see the beads (called markers) pulled to the side. If you watch the full video, which is basically the same thing over and over, you will see several catches where the markers moved but the float didn't.

In conditions like where the video was shot, the float really isn't the strike indicator. The float just holds the markers in a position where you can easily see any movement.

Realistically, markers under the float are useful only if there is minimal glare so you can see into the water, and where the current is slow enough that any movement in the markers has to be a fish rather than a rock on the bottom or just a current differential.

Still, where you can see them, they'll prove to be the most sensitive strike indicator you'll ever use. 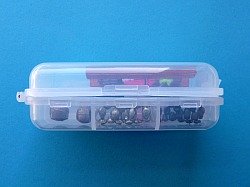 I don't want to make fun of bass fishermen (at least not too much). Many are good old boys who would give you the shirts off their backs if you needed it. But I am convinced that the reason they need a pickup truck is to carry their tackle box. This box, in contrast, is micro sized - it measures 4 1/8" by 2 1/2" by 1 1/4". I call it the Tanago Tackle Box. It will hold the bamboo line winders (but NOT the winder for the Micro Fishing Kit shown above), plus some extra hooks and sinkers, and perhaps even some micro fishing flies.