Let's call a spade a spade. Fly fishing indicators are bobbers. Nothing wrong with that. They indicate strikes and they also suspend a weighted nymph or other fly at a specific depth - both very valuable functions.

Dedicated British float fishermen wouldn't be caught dead with a round (OK, spherical) float on their line. However, thousands and thousands of fly fishermen use them.

For that matter, I know tenkara anglers who use them. I fish with one frequently (and he outfishes me frequently). Coach often fishes a tungsten bead head nymph, and he uses a 3/4" Thingamabobber for a strike indicator and also to hold the nymph just above the bottom. I can attest to its effectiveness! I do think his Thingamabobber is larger than necessary, but I have to admit that it does work (and in some situations it works much better than just watching a hi-vis line). 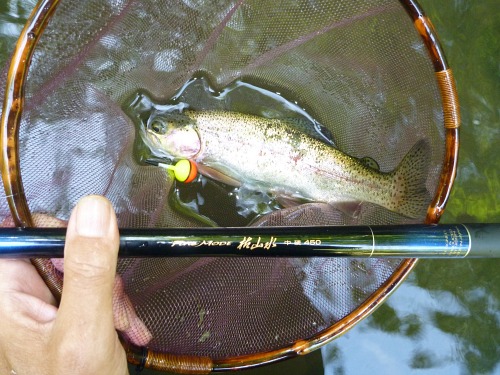 I have used Thingamabobbers a few times but always considered them to be somewhat difficult to adjust for depth when you are fishing with a light tippet.

There are a number of videos on how to make an easily adjustable Thingamabobber rig, which all seem to suggest tying a nail knot on either side of the Thingamabobber with old fly line. I don't know about you, but I don't have any old fly line laying around that I can cut up. Tying a couple of nail knots may not be rocket science, but there really is a much, much simpler solution. 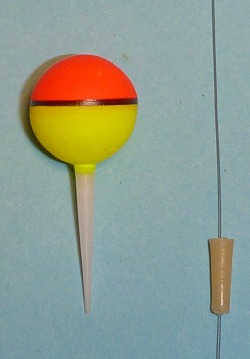 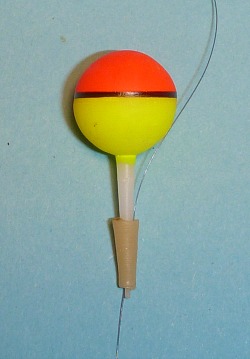 Move the rubber tubing to about an inch below where you want the float to be, and firmly insert the stem of the Nakazima Ball Float into the rubber tubing. That will  trap the tippet between the stem and the inside of the tubing and will hold the float in place. It will NOT put a kink in your tippet!

Any time you need to adjust for depth (which should be any time the stream depth changes), pull out the stem, re-position the tube and replace the stem. As the British would say "easy peasy,"  which in America (where we much prefer dessert to veggies), translates to "piece of cake!"

Float fishing in Britain is a science, with many different types of floats and many more different "shotting patterns" (where to apply the right number of the right size of split shot). Let's keep things simple. Use anywhere from a #6 to a BB shot under the float, or as Coach does, just use a tungsten bead head nymph with no shot. He catches fish. You will, too.

Glenn L, a customer from Ohio, recently sent me a video showing him and his brother fishing in Colorado. His brother was using a fly rod and reel, and despite mending, could not keep his fly in a large eddy on the far side of heavy current. Glenn was using a Nissin 2-Way 540ZX medium and was able to keep his fly in the eddy pretty easily.

I have written before that one of the advantages of the sakasa style of tenkara fly is that the reverse hackle acts like a parachute under water, resisting the pull caused by line sag and allowing you to keep line off the surface more easily. However, Glenn was fishing a size 20 zebra midge, which provides no resistance to the pull of the line. How was he able to anchor the line in the eddy? He used a floating indicator!

A floating indicator also resists the pull caused by line sag, and definitely helps to keep a light line off the surface. Additionally, because you can cast the weight of the float, you can use a very light line, which causes even less pull from line sag. A very light line is hard to see, but the Nakazima Ball Float is very easy to see, so you don't really need to see the line.

A friend and fishing buddy recently got back from a trip to Japan. While there he asked why they don't use keiryu rods for tenkara fishing, given the advantages. The answer was longer and more nuanced, but the gist of it was "Well, if I just wanted to catch a lot of fish..."

If you want to catch a lot of fish, there are situations in which a long rod and a Nakazima Ball Float can help. 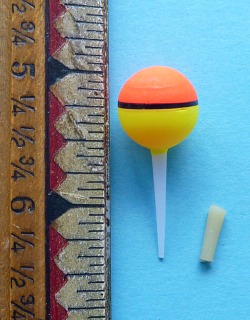 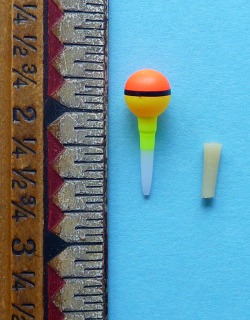 I currently have the Nakazima ball floats in three sizes: 5/8", 1/2" and 3/8". The 5/8" size should be ideal in larger rivers for trout, where you would have a larger bead head nymph (or two) or a BB shot for a keiryu rig. The 3/8" should be ideal for micros and sunfish, where you are fishing a small bait or a lightly weighted nymph in still water, and where you need only one size 10 or size 6 Dinsmore shot.

After initially stocking the 5/8" and 3/8" size I realized that the 1/2" size would be a convenient size to have also. The 1/2" float will just barely support a BB shot, and would be a good size for a #1 or #4 shot, or for most tungsten bead head nymphs.

Nakazima ball floats do come in other sizes but the 3/8" size is the smallest and I truly believe 3/4" is too big. You want the float to suspend the nymph or bait, but you do want it to be very easy for a fish to pull under. You do NOT want a float the size of a ping pong ball! It should be just large enough to see and no larger. The fluorescent orange top makes the Nakazima ball floats easy to see in either moving or still water. 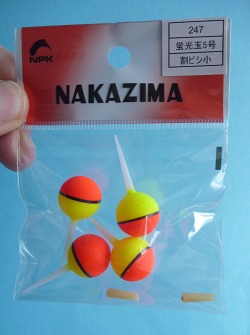 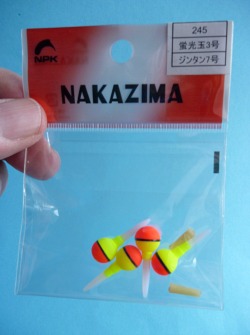 All three sizes come with four floats in a pack. Each pack has two rubber tubes. The tubes are safe because your tippet runs through them. The floats are more vulnerable to loss if you do not insert the stem into the tubing firmly!

I do think they're a much better bobber than a Thingamabobber, though, so if you use an indicator/float/bobber for either nymph fishing or bait fishing, give the Nakazima ball floats a try!

In low, clear water, the floats might alert fish that something isn't right, but in low, clear water you are much better off with the Ultralight Worm Fishing approach! If the water is much over knee deep the Nakazime Ball Floats do not seem to scare the fish.

I spent the weekend using my recently ordered Nakazima ball floats on our farm pond, and what a great product they are!

They are so sensitive, and any fishy business causes subtle but detectable wobbling of the float.  I was able to key in on these movements and be prepared when fish finally took the bait.

I caught 21 fish; my dad, who was using a more common red and white bobber, caught 6.  Was the float the difference?  Who can say!  I believe the sensitivity of the Nakazima floats was key.

I've used every indicator in the world and these were best by far: easy to see, easy to re-locate, easy on the tippet.