In my opinion, fluorocarbon level line is the most significant advancement in tenkara equipment since the development of the telescopic rod. It offers a few major advantages over a tapered line and I cannot recommend it highly enough.

The biggest advantage of fluorocarbon level lines is their greater density. With a denser line you can cast a lighter line, and to my mind using a light line and keeping it off the water to the extent possible is the essence of tenkara.

The main limiting factor on how light a line you can cast is wind resistance. Not from fishing in the wind, but the resistance of the air as the line pushes through it when you make your cast. If you have two 12' lines with the same weight, the one that is denser will have a smaller diameter. A smaller diameter means less wind resistance, and that means you need less weight to overcome it.

The tippet end of the line has to be heavy enough to overcome wind resistance or the line and tippet will not turn over properly. In a tapered line, the middle and butt sections of the line are even heavier. The only reason I can see for having a line that is heavier than the minimum amount required to turn over the tippet is because the rod is stiff enough that it requires a heavier line to cast properly. I suspect this is why 7:3 rods are generally fished with tapered lines.

I understand the physics (at least broadly) of casting a line, which suggests that a tapered line should be more efficient in transferring the energy of the cast from the rod to the tippet, but I also understand that in real life, tapered tenkara lines are uniformly too heavy and level lines work better. After all, the goal is not to cast the line but to catch the fish, and the cast is actually a minor part of that equation.

Level line is also less expensive than tapered line. The level lines I carry come on spools of 30 or 50 meters, enough for maybe 8- 10 lines. You can carry the spool with you and cut an amount that best matches the width of the stream you are fishing. For that matter, even if you don't have the whole spool with you, if you need to fish a tighter spot you can easily cut your line and then tie it back together later if the stream widens out. There is no practical reason not to have knots in your line! (The tippet will be weaker than the knotted line, the line is in the air rather than on the water so the knot will not pick up debris, and there are no guides for the knot to foul!)

If you are fishing a very small, tight stream you might want a line three feet shorter than the rod so that when you add about 3 feet of tippet the total length from rod to fly is equal to length of the rod. It is easier to cast to tight spots with a short line. Also, it is much easier to keep your line off the water, minimizing drag and greatly improving your presentation. After you hook a fish you will be able to reach it with your net and not have to grab the line with your hand to bring it in the last few feet.

If you are fishing wider streams, ponds or lakes, you could use a line perhaps 1.5 times the length of the rod, to which you would add 3 to 5 feet of tippet. Although you can cast further, it will be impossible to hold all the line off the surface unless you are fishing downstream and using the current to pull the line tight. With a long line, you will have to pull the line in hand over hand to net the fish - which is easy to do with small fish but a tricky skill to learn with larger fish.

There seems to be a lot of commentary about long lines, but do not think that longer is necessarily better. Please read my Long Rod, Short Line page. With an overly long line, you lose many of tenkara's advantages.

A third benefit of level line over tapered lines, particularly furled tapered lines, is that when you get a snag and have to pull back on the line to break it off, furled lines will coil themselves into an incredible tangle. The nature of the furled line, which is made by twisting the individual strands, plus the elastic nature of the thread (or even worse, the nylon mono) they are made from, makes the line twist when stretched to the tippet's breaking point, and the rapid untwisting as the line recoils after the tippet breaks causes it to tangle every time. The only furled line material that doesn't tangle is kevlar, which doesn't stretch. Kevlar does absorb water, though, so it becomes very heavy. I do not believe it is suitable for a tenkara line.

Not too long ago, Bass Pro Shops introduced a yellow fluorocarbon line that they marketed as being hi-vis. In tests on the stream, I couldn't see it. It wasn't even close to being as visible as the truly hi-vis tenkara lines, yet it was discontinued after about a year because bass anglers wouldn't buy it. That's what happens when line manufacturers, retailers and anglers all believe deep down that fluorocarbon line ought to be invisible.

If I can't see the line, I can't watch for a slight twitch or hesitation that might be the only indication of a delicate strike. I am convinced that the fish are not spooked by colored line. Line splash or line shadow, yes. Line color, no. The first day I fished with the highly visible fluorescent orange Sunline fluorocarbon, I had my best day ever - fishing for spooky wild fish.

Until I found the truly hi-vis fluorescent orange fluorocarbon line, I used mono in very low light conditions. Even though it's less dense and doesn't cast as well, brightly colored mono lines were much easier to see. For me, that more than made up for the slightly harder casting. Because of the lower density, you need a thicker line to get enough weight to cast well. I must say, though, that because a truly hi-vis fluorocarbon is now available, I really don't think there is a good reason to use mono. Similarly, although I frequently get questions about using the brightly colored Amnesia running line, it is made from nylon and for tenkara is really no improvement over a regular monofilament line.

For something as simple as level line, is it necessary to have instructions on how to rig it? Well, maybe for the first time you do it, as it is completely different than rigging Western fishing lines.

Some anglers tie a perfection loop into the rod end of the line and attach a braided loop (fly line backing) similar to that used to attach tapered lines. I have tried that as well, but I must say that after really getting used to the knots shown below, I find these knots to be just as easy to use and much more reliable. 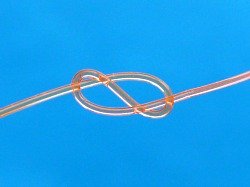 After cutting a line to the length you want, I would suggest tying a figure 8 knot in each end of the line, and then cutting the tag ends to about 1/8" to insure the knots don't come undone. At this point, it doesn't matter which end of the line will be the tippet end or the rod end, as they are exactly the same. That will soon change. 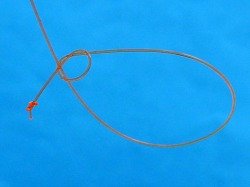 Then tie an over hand knot around the main part of the line.

Tighten the overhand knot to form a loop. At this point, what you have is essentially an arbor knot (although with a figure 8 knot instead of an overhand knot on the tag end). 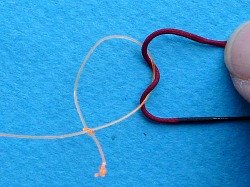 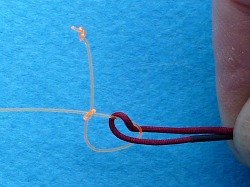 The photo below is large because it is important. 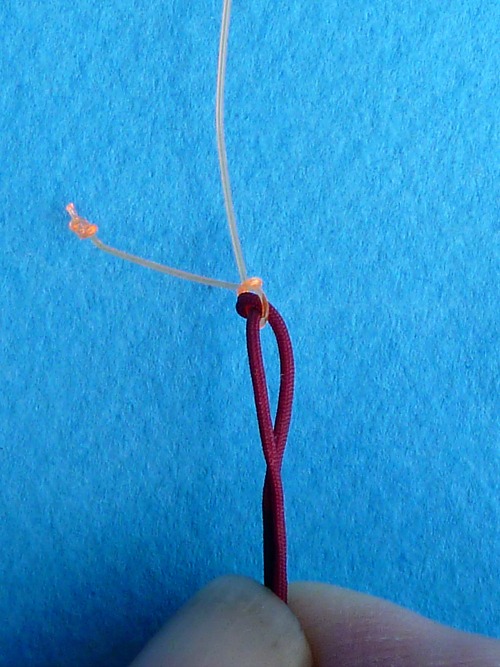 To remove the line, again hold the end of the lillian and the rod tip between your thumb and forefinger while holding the end of the grip section with your other fingers. Grasp the figure 8 knot on the tag end of the attachment knot and pull it directly in line with the rod. It should loosen the attachment knot enough to take it off the lillian. Again, be very careful that you do not pull the rod tip towards the side. 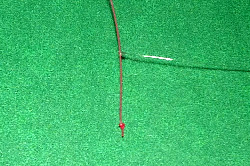 To attach the tippet to the line, you can use just about any knot you use to tie on your fly. Tie the tippet around the main part of the line just as you would tie it around the wire that forms the hook eye. (The photo shows much thicker mono than you'd use for a tippet. My cell phone camera won't capture 5x or 6x tippet.) 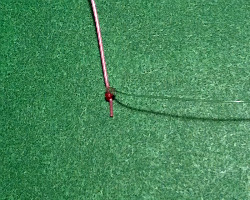 If you are using a very light line (size 2 or 2.5) a figure 8 knot will not be large enough to hold the tippet on securely. For those lines, I would recommend either a perfection loop or a tippet ring. 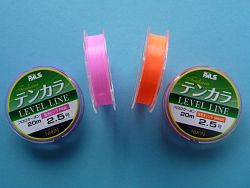 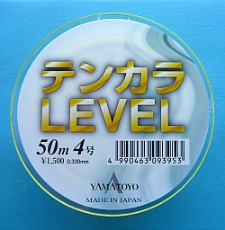