Keiryu on the Farmington

Recently I have taken a few trips to the Farmington River in Connecticut. Although I rarely publish the names of the streams and rivers I fish, I will make an exception in this case. First, the Farmington River is no one's "secret spot." Trout anglers from Maine to Maryland know of it. Second, it is a particularly nice resource for keiryu anglers.

The streams I frequently fish all seem to be managed under different regulations. In a sense, that makes each one a test bed for trout management. Although you can never have a situation where all other variables are constant, you can at least get a sense of whether the current regulations successfully protect the health of the fishery. 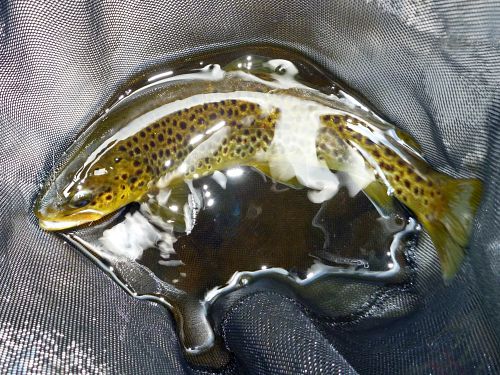 Unique among the streams I fish, the Farmington has a fairly long stretch that is catch and release and requires barbless hooks - but allows fishing with bait. To me, this is an ideal spot for keiryu fishing, and conversely, keiryu fishing is an ideal method if one is going to fish with bait - and not only on the Farmington - anywhere you intend to release your catch.

The average fly fisherman may not think "catch and release" and "bait" belong in the same sentence. Keiryu anglers know it makes perfect sense.

I have written before, but it certainly bears repeating, that bait fishing with an "active" rather than a "passive" style hooks fish just exactly where you hook fish with flies - in the mouth. When fishing in moving water with a sensitive rod, a tight line and either keiryu markers or a very small float, the take of a fish is noticed immediately. If you act immediately upon indication of a take, the fish does not have time to swallow the bait. If you are passive and wait to "make sure he's got it" he'll have it alright - down his throat. If you strike quickly, just as you would with flies, you'll have no more deep hooked fish with worms than you do with flies.

The Farmington River proves that allowing bait fishing per se does not harm a fishery. The Farmington is well known, and rightly so, for being an excellent trout stream.

It doesn't hold just trout, though. Connecticut stocks thousands of Atlantic Salmon parr. They do look a lot like small browns, and since the browns do reproduce in the Farmington, you will catch both browns and salmon with parr marks.

The easiest way to tell the difference is by looking at the tail. The salmon, upper photo, has a much deeper fork in its tail than the brown trout, lower photo. 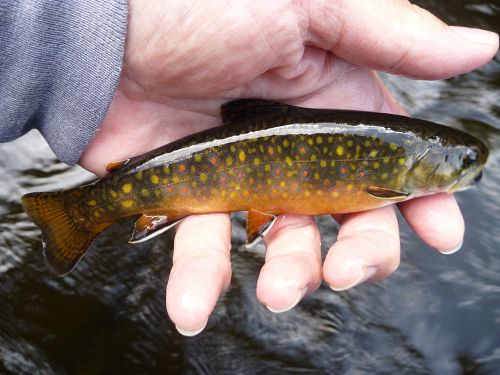 The Farmington also has lots of brookies, which of course are easy to identify. Not all are this brightly colored (see photo at right), but all have light spots on a darker background, while browns, rainbows, cutthroats, and the Atlantic Salmon, have dark spots on a lighter background. 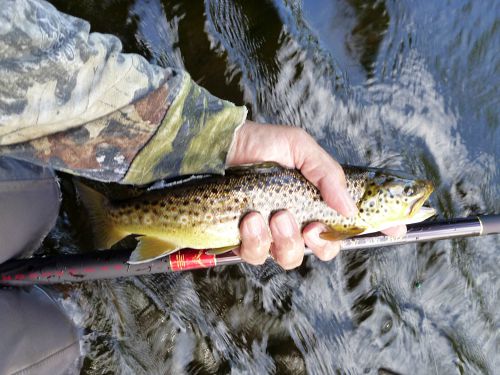 Although the Farmington does have salmon and brookies, to me it is primarily a brown trout stream. To date I have not caught any particularly large trout, but I do know they're in there. Each trip was a "many" day, though, and each has yielded fish in the 12-13" range.

Beyond the browns, brookies and salmon, the Farmington is also well known for its rubber raft hatch. There are paddlers - lots of paddlers - but for the days I was there they were only a minor annoyance (which is probably exactly what the paddlers think of the fishermen).

I don't think the presence of paddlers scares the fish - at least not for very long. If they stopped eating every time a rubber raft passed overhead, they would die of starvation. I don't recall catching a fish immediately after a raft or canoe passed by, but I did catch a lot of fish so it really wasn't a problem. Also, I was never wading in a spot where I was likely to get hit by an out-of-control boater. And, one did warn me of the presence of a bear, just upstream of me and luckily on the opposite bank. Yes, there are bears. Maybe not a lot, but I have heard other reports of them on the Farmington.

To me, the Farmington was not just a test bed for fishery management, it was also a test bed for keiryu marker management. The first time I fished it I used the single marker with long tag ends that I had first tried at the Midwest Tenkara Fest. By the last trip to the Farmington, though, I had gone back to the Japanese practice of three or four markers of different colors. I find the yellow and orange ones easier to see than the pink so I settled on three markers, one orange flanked by two yellow.

Against the more varied background of ripples and glare, I found the different colors were much easier to see than a single marker of any color, even though they were significantly smaller. I also found it easer to see them if they were only a few inches apart rather than the 8" or so I had used when I first used markers. Perhaps because there was considerably more current in the Farmington than in Wisconsin's "miracle pool," I did not have any trouble detecting subtle strikes, so the butterfly effect of having the long tag ends wave when center dipped on a take was not required.

The strangest thing did happen, though, and twice. A salmon parr leapt completely out of the water and grabbed one of the markers! The first time it happened, it pretty quickly let go. The second time (in a different spot on the river so obviously not the same fish) one took the marker and held on, pulling it all the way down to the split shot. If I'd had a hook in the marker I would have caught it.

I have thought about it, and about having a dry under the markers, situated so it is skating on the surface. Having the shot and hook so far below the dry, though, would almost guarantee getting snagged on a rock if a fish of any size took the dry. It is an interesting idea but not practical.

If you'd like a keiryu trip that should be a productive day on a very productive stream - or if you would like to add Atlantic Salmon to your life list - head to the Farmington river. I think you'll enjoy it.  (And truly, there are so many fly fishermen there already, a few more keiryu anglers are not going to change anything). 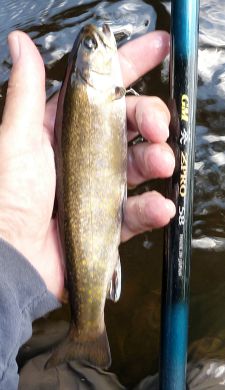 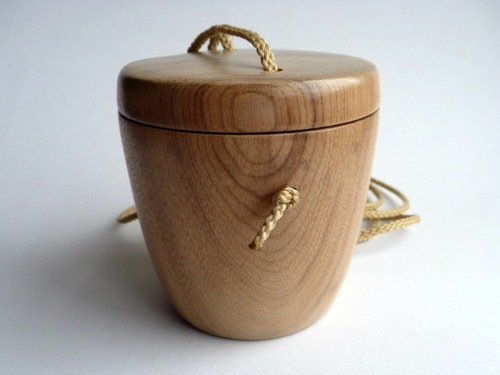