On January 17 and 18 I attended the Yokohama Fishing Show as a guest of Tenryu. My primary goal for the show was to visit with Tenryu Chairman Miyoshi Shiozawa, Fishing Tackle Division Manager Takuya Shiozawa and product development and sales personnel to discuss their new Rayz and Rayz Spectra spinning and baitcasting rods. 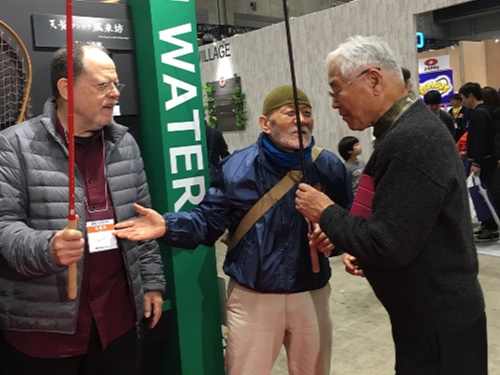 At the Yokohama Fishing Show with Sebata san (center) and
Chairman Shiozawa (right).

However, I did get to meet Sebata san, who is rightfully a legend among tenkara anglers, and to see Dr. Ishigaki, who was at the show to give a tenkara lecture and casting demonstration. I also met my arch competitor, Keiichi Okushi, who is living proof that competitors can be friends, and with whom I hope to fish on a subsequent trip to Japan (as long as he promises we won't be climbing up any waterfalls, which seems to be central to his genryu fishing). 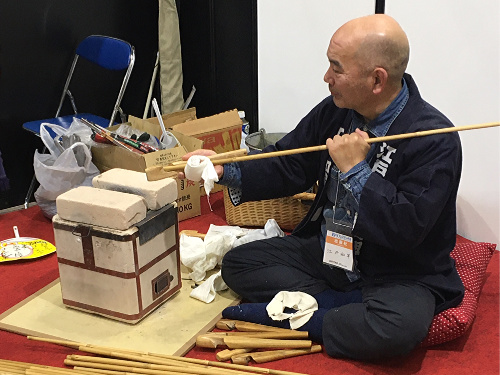 At the show, I also met Yasuo Nakadai, a maker of Edo Wazao - the traditional Japanese bamboo rods. He started as an apprentice at the age of 17 and has been making bamboo rods for 40 years now. At the show, he was demonstrating how bamboo is straightened by heating it between two bricks on a small furnace and then repeatedly bending it a little bit at a time.

He mentioned that he was in a video shot by NHK that would be released a few days after the show. The video, on tanago fishing, showed him shaping the tip section of a tanago rod by shaving it with a tool that looked more like a knife than a plane. Very delicate work.

At the show, he was in a booth with two other Edo Wazao craftsmen. I looked longingly at the tanago rods on display, but since I was not planning to buy one at the time, I didn't ask the price. I also didn't ask which of the craftsmen had made the rods that were on display. I later found out that one of Nakadai san's tanago rods was up on an auction site for 150,000 yen (roughly $1400)! 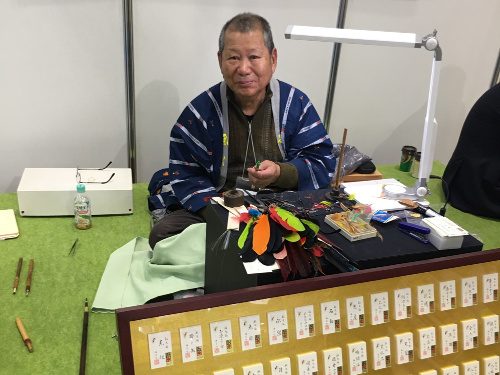 At another booth I met a Kazutsugu Fujiwara, who was tying Ayu flies (Banshu Kebari). The vise he was using to hold the very small hook was a pin vise set into a short bamboo rod. The pin vise holds the hook at the head, not at the bend like a western fly tying vise. The bamboo rod was held in his left hand and rotated in his fingers. The thread and the body material was held in his stationary right hand. The thread and body was wrapped by rotating the hook - just the opposite of how tenkara kebari and western flies are tied. (I have since seen YouTube videos showing tyers holding the rod stationary, and wrapping the thread and body material around the hook.) To me, the hardest part appears to be wrapping the hackle, which consists of just six hackle barbs that extend back past the hook bend, almost parallel to the hook shaft. 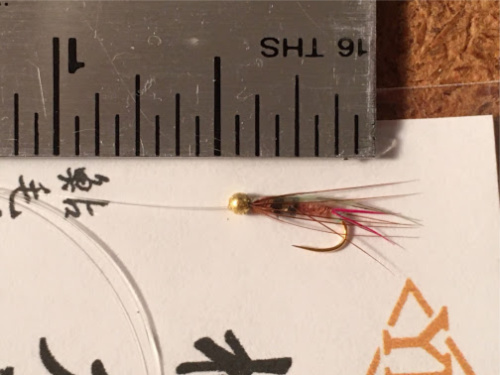 I have seen many images of Banshu Kebari, but none showed them alongside anything that showed their size. They are much smaller than I had expected, probably equivalent to a size 18 nymph hook. They are very delicate flies. In Japan, I believe they are used only for Ayu but I have to think that they would be very effective for trout as well. Fujiwara san very generously gave be a couple of his flies, with which I'll test my theory.

In January, Japanese streams are all closed to fishing, and I didn't have time to stop at any of the Areas (private pay-to-fish lakes that are open in the winter). So, no fishing this trip, but there is so much more to visiting Japan than just fishing. Truth be told, the fishing (or at least the catching), is better here. The culture, the people, the food - they're worth the trip even if you never fish.