The Yarn Nymph is a simple, unweighted nymph tied with just thread and a dark yarn. Try it when you see "rises" but no bugs on the surface.

I've read more than a few times that when you see rises or swirls but no bugs on the water, trout are taking nymphs that are in the film or just below the surface. The consensus recommendation is to fish emergers.

There's only one problem. There are no emergers emerging. The fish are eating nymphs, not emergers. In some mayfly species, the nymphs drift for a fairly long ways before making it to the surface and actually starting to emerge.

At that stage, they are quite vulnerable, and trout take them readily. These days, not many anglers have a fly that represents a nymph in the top few inches of the water column, though. Some fish soft hackles, and some fish flymphs. Of course, you could fish kebari, but the profile is really very different. If the fish are eating nymphs, why not just fish nymphs?

These days, it seems all nymphs are weighted, either with bead heads or wire wraps or both. When I first started fishing nymphs (was it really 50 years ago?! Ouch!) all the ones I had were unweighted. I fished relatively small mountain streams in CO and some slightly larger streams in WY and MT, and the unweighted nymphs caught fish.

In smaller streams where fishing a bead head nymph is just asking for snags and lost flies, an unweighted nymph is a nice option to have. The Yarn Nymph is as simple as they come. I think it takes longer to describe how to tie one than it does to actually tie one.

Use a dry fly hook to keep the nymph near the surface, or a wet fly or nymph hook to sink it just a bit deeper.

1. Start the thread at the hook eye and advance it with touching turns to the hook bend. 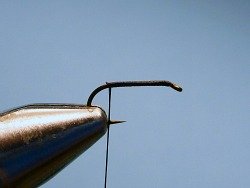 2. Cut several inches of yarn and separate it into the two separate strands. Using one strand, start the yarn just behind the hook eye and form a thorax with several layers of yarn over the first third of the hook shank. Clip the yarn tag end. 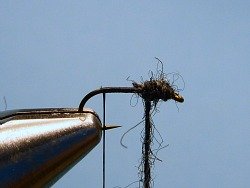 3. Advance the yarn with touching turns to where you have left the thread hanging. 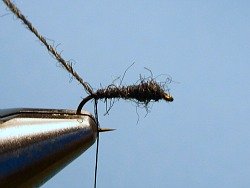 4. Tie off the yarn with one or two turns of thread. Then do a 3-4 turn whip finish at the bend. Clip the thread. 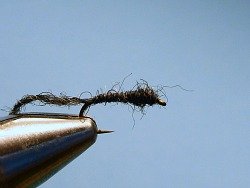 5. Split the yarn tail in half and cut one half close to the whip finish. 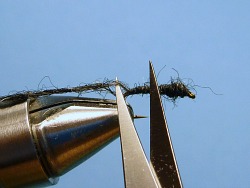 6. Gently pull the yarn tag end until the yarn starts to pull apart. 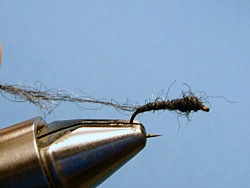 7. Cut the yarn so that the tail is about the length of the abdomen. It should be thin and scraggly. 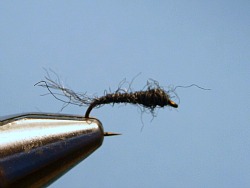 8. With a bodkin or dubbing needle, tease out "legs" from the bottom of the abdomen. 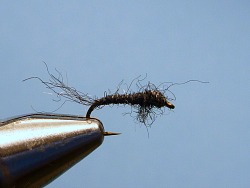 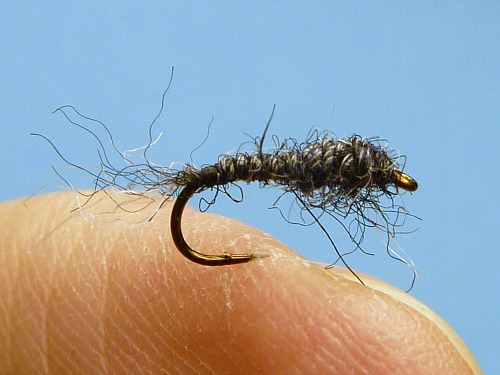 Every one you tie will be a bit different but they will have a few things in common. They will be very easy to tie, they will be very "buggy" (and will only get buggier after the trout have chewed on them a bit), and they will drift convincingly just a bit below the surface.

Give them a try. What have you got to lose? A few minutes and a few pennies. 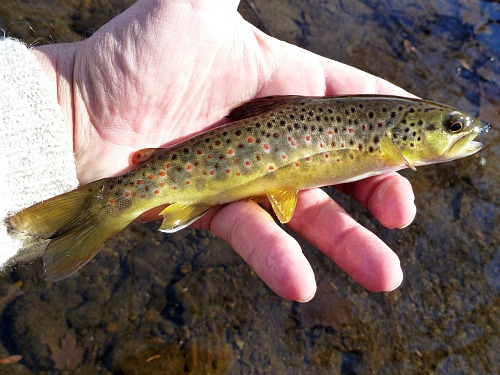 The yarn nymph!  Tied up one today (size 16) and went to a local pond...despite cold water and rather sluggish fish, small bass and bluegill took it with relish, fish after fish after fish! GREAT FLY! Thanks, Chris.

Thanks for your Yarn Nymph. Works great. I caught 25 trout on just one fly, didn't get the hook set on another 8. Thanks for a great site.