This report is a follow-up of the 8-25-19 trip report. In that report I suggested that a tenkara fly's bushy hackle resists being pulled through the water, and that it is much harder to keep your line off the water's surface if you fish a Killer Bug or other fly that has no hackle.

I then suggested that to offset the difficulty of keeping your line off the water when fishing a no-hackle fly, you could shorten your hi-vis line by a foot or two and replace that last foot or two with fluorocarbon tippet material of the same diameter. The heavy tippet will still be in the water, but being a clear line rather than hi-vis, it should be much less likely to scare the fish. At that point, the idea was untested. 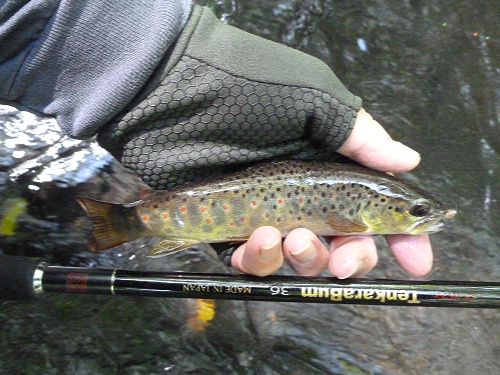 On Saturday I tried it and found that it worked pretty well. The heavy tippet was indeed in the water, but I was still able to catch quite a few fish.

I tried two different line configurations, one with the last foot being clear and one with the last two feet being clear. Obviously, it was easier to keep the hi-vis Sunline out of the water when I had 10 feet of Sunline and 2 feet of heavy tippet (fished with a 12 foot rod) than when it was 11 feet of Sunline and 1 foot of heavy tippet. I did not notice a difference in catch rate if there was 1 foot of clear heavy tippet in the water compared to 2 feet. 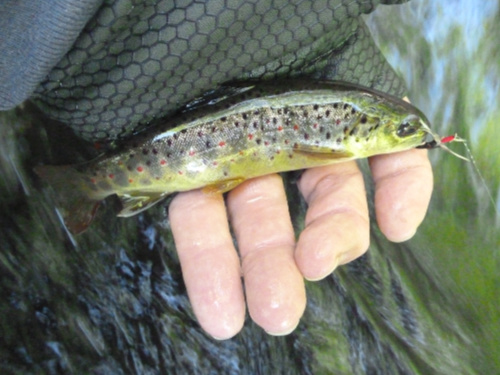 I was a little concerned that if I fished a heavily hackled wet fly and was able to keep even the clear line out of the water it might be harder to detect strikes. Having clear line for the last two feet of your tenkara line is the exact opposite of using a sighter! To overcome that potential problem I tied keiryu yarn markers on the clear line, as I had done the first time I tried using clear line for tenkara in late 2015.

For those not familiar with keiryu markers, the material is a thin synthetic yarn that does not absorb water. Three or four knots of the marker yarn are tied around your line, positioned so that the lowest marker is above the surface. Tied correctly, the knots can be moved up or down your line, but will then stay put. They are quite visible and they make it easy to see even slight twitches or hesitations in your line. Using keiryu marker knots is an extremely sensitive method for strike detection.

On that trip (Trip Report 12-12-15) I found that using heavy tippet and yarn markers worked quite well with a Killer Bug but that the yarn markers caused too much wind resistance to cast an unweighted fly. I was using 1X tippet as tenkara line, which is the equivalent of size 2.5. Thinking that a heavier line would help overcome the wind resistance, on Saturday I used a size 4 line.

Also, on Saturday I trimmed the tag ends of the marker knots short rather than leaving 1/8"+ tag ends as I'd done in 2015. With the heavier line and the closely trimmed marker knots, I had no trouble casting a heavily hackled fly. 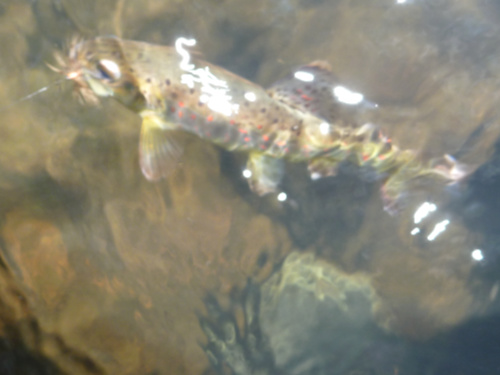 I was concerned that such small marker knots might be hard to see, but they were really quite visible. In fact, they were visible enough that for my next experiment I will construct the line with much less hi-vis line, more heavy clear tippet and more knots.

I know fish can see the knots. While keiryu fishing using marker knots with about 1/4" tag ends, I have had Atlantic Salmon parr in Connecticut and Warpaint Shiners in North Carolina leap out of the water to try to eat them.

The knots obviously did not scare the fish! Paul Gaskell and John Pearson have determined that hi-vis line does scare fish if it is in the water. Their results, and mine, do not suggest that hi-vis line scares fish if it is in the air and never touches the water even briefly. However, Rob Worthing's experiments suggest that a brightly colored fluorescent sighter can alert large, heavily pressured fish (to the point that they can be caught with a white sighter but cannot be caught with an fluorescent orange or charteuse sighter).

For some time I have offered Sanyo Valcan lo-vis line for when stealth is critical. Unfortunately, in deep shade it is very difficult to see. The Sunline Visible Free white line should also be quite stealthy, as white is very hard for the fish to see with either a bright or a cloudy sky as a background. It is much easier for the angler to see in deep shade, though. Unfortunately, the Visible Free line is nylon, and thus harder to cast than fluorocarbon.

I think perhaps a line consisting of some size 4 white Visible Free nylon and some size 4 clear fluorocarbon tippet material, perhaps tapering through size 3 (0X) , size 2 (2X), 4X and finally 5X as the real tippet might be an excellent line in terms of stealth, casting performance and strike detection. Closely cropped keiyru yarn markers on the heavy tippet would be necessary (and effective) for the strike detection.

I can imagine that some readers might wonder why not just lengthen the 5X tippet, which would be a far simpler solution. A longer tippet could work when using a killer bug or other fly that has some weight, but it would be much less effective when casting a bushy tenkara fly - to the point that if you wanted to switch flies you probably would want to switch lines also. I was looking for a solution that would produce the same or better casting performance and strike detection with more stealth. I also wanted one that works equally well for traditional, hackled tenkara flies and for nontraditional flies that have no hackle.

Such a line is very clearly not in the spirit of simplicity that some people attribute to tenkara. It is certainly true that tenkara gear can be extremely simple. However, I believe that elevating simplicity can diminish effectiveness. I know very well that a simple level fluorocarbon line about the length of the rod, a meter of 5X tippet and a hackled wet fly catches fish and occasionally catches lots of fish. I suspect, though, that the line can be improved upon, which likely will also improve the catch rate.

You may not want to complicate things, which is fine. I like experimenting.

I tried a line constructed as suggested above - a 12' line consisting of 6' of size 4 white Visible Free nylon, 4' of size 4 clear fluorocarbon tippet material, and then one foot each of size 3 (0X) and size 2 (2X). The  "tippet" consisted of 1 foot of 4X and finally two feet of 5X. Closely cropped keiryu yarn marker knots were tied to size 4, size 3 and size 2 clear line.

The marker knots on the clear line were visible enough most of the time. There was a huge difference from my previous experiment, though, when I had only a couple feet of clear line, and all of the marker knots within a foot of the end of the hi-vis line. With the hi-vis line pointing the way to the markers only a little ways away, they were always easy to spot. With the end of the line 4 or 5 feet away from the bulk of the marker knots and high enough above the water that it was out of the area on which I was intently concentrating, at times the markers were hard to find and hard to follow.

The experimental line may have been more stealthy, but my catch rate wasn't any better. Whether I missed seeing strikes or whether having fished the same portion of the stream for three consecutive weekends with the same flies had any impact I'll never know. I do know that the trouble of constructing the line was not rewarded with more fish.