The two Nissin Fine Mode Kosansui keiryu rods had arrived during the week and I was anxious to give them a try. They promised to be pretty capable rods and I wanted to catch some fish larger than my usual little wild browns or modest bluegills. Several weeks ago, I had caught a couple nice fish on the E. Branch of the Croton, but the last two times I was there were not resounding successes. Time for Plan B.

About this time last year, I went to a reservoir in New Jersey for some white perch. In addition to numerous perch, I also managed to catch a hybrid striper (wiper) or two. 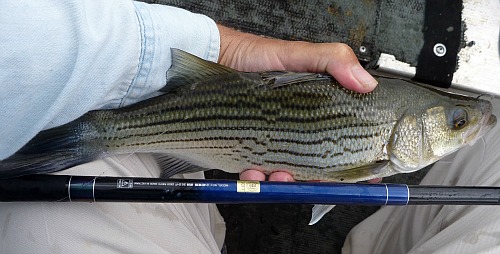 I thought a wiper would be a good test case for the new rods.

What is it they say about best laid plans? I guess the first clue is that the wiper photo above is from last year, not last Saturday. I caught a lot of white perch - none of which I took a photo of because I left my camera home. They put a bend in the rods, but didn't stress them by any means.

I also managed to catch a couple nice bullheads of 12" or so, and just had to take a photo of one of them, even if only with my cell phone. Again, not a challenge to the rod. 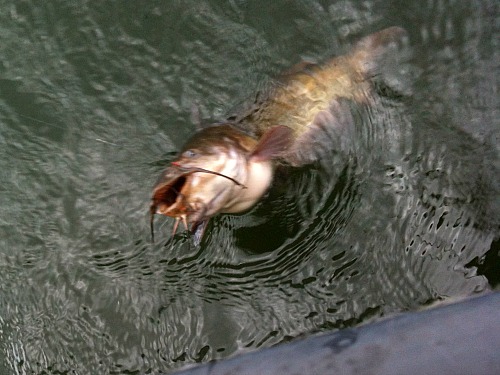 The wipers, on the other hand, proved a bit problematical. I did hook a few, but I didn't land any. I was using tippet with a rated breaking strength of 5.1 lbs. The wipers broke it with no problem. Over and over. I didn't even bring stronger tippet - the next step up (at least of what I have at home) would have been 7.2 lbs - which by the way, I had for line making (a la John Vetterli and Eiji Yamakawa) not for tippet. I wouldn't use tippet of that strength on any of the fixed line rods I sell. There are rods that are designed for it, but I don't currently carry them.

I will say that the fish I hooked this year were larger than the ones I caught last year. The strength of the first run was obviously different (and I am sure I wouldn't have used 7# tippet last year either).

So, I guess this is a report of the fish that got away and the rods that survived to tell the story.