I'm falling behind in my trip reports. This is for a week ago last Sunday, which was a pretty amazing day. Rather than going to a cold water stream (for trout) or a warm water pond (for sunfish) I went to a warm water stream. I ended up catching 9 different species of fish in that one creek with one other species in a pond later in the day. Of the 10 species of fish caught that day, four were ones I had never caught before. Of the ten, four were micros, but I think I'll start doing separate Micro Fishing Trip Reports.

The day started off with a bluegill - always an easy one but I didn't catch many bluegills. 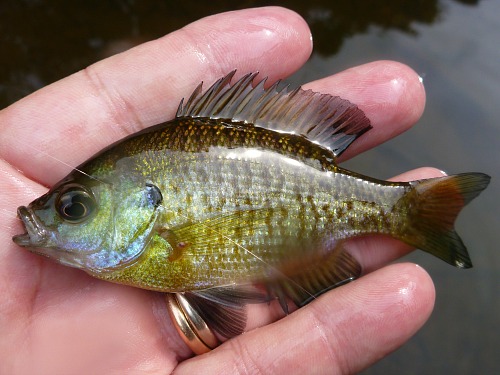 The next fish was a rock bass (and I didn't end up catching that many rock bass, either).  I don't remember what I caught the bluegill on. The rock bass was on a Keeper Kebari. 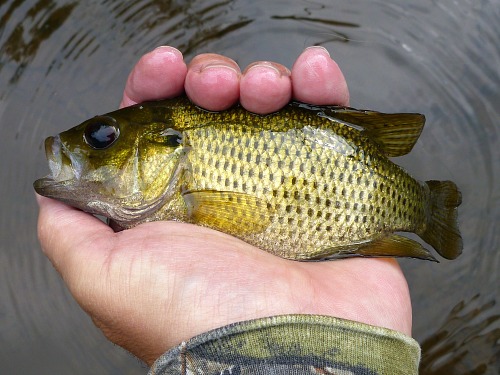 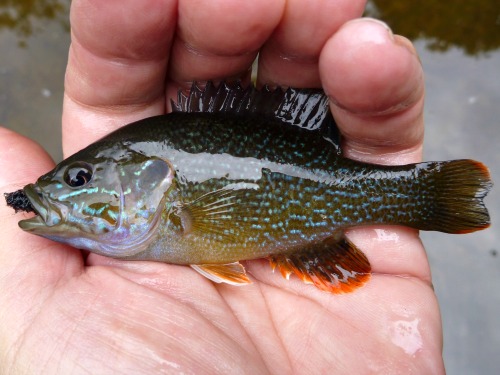 I then switched from the Keeper Kebari to another attempt at a messy fly. This one was tied to see how it would look if I didn't strip off all the fuzzy barbs at the base of a partridge feather. It looked pretty bad - bad enough that I'm not even going to show it. I don't think I'll tie any more like that. It was no easier to tie than a more conventional fly, and I didn't find it to be at all attractive. 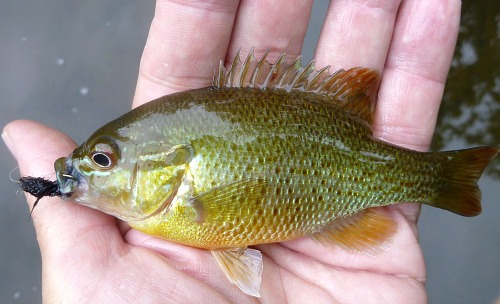 This redbreast sunfish did, though. The redbreast is another very common stream sunfish and I ended up catching a lot of them, too. In real life, this one was even more blue than it shows in the photo. 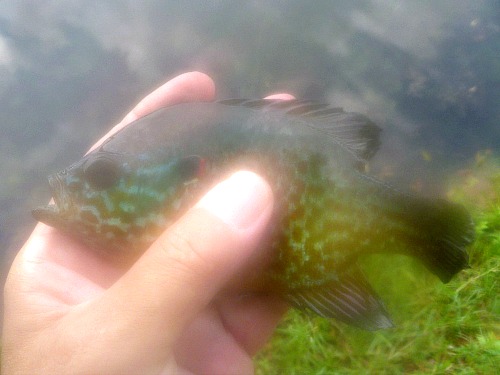 Towards the end of the day, we went to a small pond where I caught a pumpkinseed. My camera lens had fogged, though, so the shot is pretty poor.

The fish weren't large, but they were numerous and hungry - and with the right rods, even fish of this size are an awful lot of fun to catch. It was a "many" day. One of the nicest things about fishing a warm water stream, at least to my mind, is you never know what you are going to catch next. I'm definitely going to do it more often.

I have a separate Micro Fishing Trip Report for the day.