Spent a bit of time exploring on Sunday. All you guys with cars probably do a lot more exploring than those of us who are vehicularly challenged. If you don't, you really should. I would bet there are a lot more fishing opportunities around where you live than you realize.

Not too long ago, a reader told me of a trout stream. He didn't tell me the name or exactly where it was - just enough that with Google Maps I could make an guess as to which little blue line might be it. I went looking for it Sunday but I don't think I found it. The only apparent access to what I thought the most likely candidate was through something right out of the Ballad of New Orleans  ("they ran through the bushes where a rabbit couldn't go"). I might have tried to push through it had the CDC not recently announced that Lyme Disease is 10 times more prevalent than previously thought. The whole area is loaded with deer, deer ticks and Lyme Disease (which, by the way, is a good reason to wade and stay out of the bushes as much as possible). Plus, of course, what I could see of the stream looked so overgrown I would have had a hard time fishing it with even the 6' Kiyotaki 18.

What I did find a little later, though, was the nicest location for micro fishing I think I've ever seen. It was a little stream with almost manicured grassy banks running through a town park. Unfortunately, the park is for town residents only so I really couldn't stop to fish, but in the few minutes I spent walking along it, I saw sunfish, what looked from a distance like some small smallmouth bass, several different species of "minnows" (shiners, dace, chubs or true minnows - hard to tell which at a distance) and a lone pickerel.

Most towns have parks and many of them have water. Not all of them are reserved for town residents. I'm going to do more exploring.

Most of what is written about urban fishing seems to be "brownlining - largely fly fishing for carp, but there are certainly other opportunities. Places where you don't have to bust through brush, and probably won't need to get shots if you happen to fall in. (And where you won't have to bring your "Glock 9mm pistol to ward off 'shady characters.'" as the Wall Street Journal once wrote of brownliners.) Personally, I think a town park seems like a much more pleasant place to spend a Sunday afternoon.

After I left the park I headed to one of my usual streams, but on the way noticed for the first time that the road crossed a little brook. Luckily, there was a parking lot right alongside. Even more luckily, the parking lot was for a company that was closed on Sundays. I parked right next to the brook and peeked through the cattails. 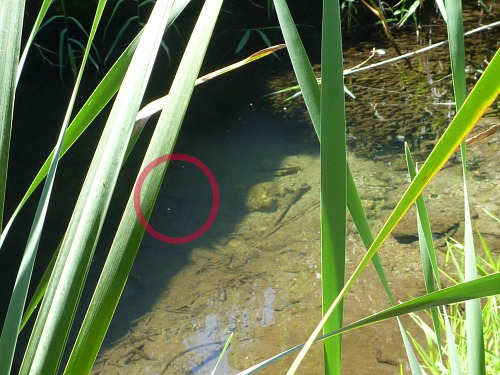 What I saw, but what doesn't really show up in the photo, is about a 7" creek chub. For the benefit of people who have never caught a creek chub, a 7 incher on a light seiryu rod will give you quite a fight. It just so happened I had a light seiryu rod with me (don't leave home without one). I rigged up with a size 14 soft hackle and let fly.

I couldn't get the fly to him without one of the abundant smaller fish hitting it first. Size 14 was a perfect size for the large chub, but was too big to hook the little fish that would hit the fly before he had a chance at it. I even tried dapping it (don't tell Daniel) right in front of him but he showed no interest. I then changed flies (don't tell Daniel), putting on a size 18 beadhead (don't tell Daniel) yarn bodied nymph, which I dropped a bit in front of him an a bit to the side. That must have been exactly what he was waiting for because he took it immediately.

...and I missed the hook set. He was on for a second but one flip and he was gone. And then all the other chubs were gone. I've had that happen before. Catch one chub and the rest all disappear. I did manage one shiner but by then the pool was completely spooked and it was time to move on.

One of my customers is very definitely a proponent of the Shotaro san school of fly tying. His "purple uglies" look really very much like flies that Shotaro san tied. I have tried to tie ugly, messy flies and they always look like I TRIED to make them messy. They didn't have the right look at all. There have been times, though, when tying a fly that was supposed to be neat and properly proportioned I couldn't get the hackle to wrap right. Some of the barbs went on one side of the stem and some went on the other. I've always started wrapping all over again and can usually fix it so most of the barbs point the right direction.

This time, I tried to produce that effect and ended up with what I'll call a Red Disheveled - the kebari version of a bad hair day. This one's tied on a Daiichi 1550 wet fly hook, size 12, but I think a shorter shank hook (1530) or possibly an 1120 scud hook might be better. (What is "better" though? More disheveled or just less bare hook?) 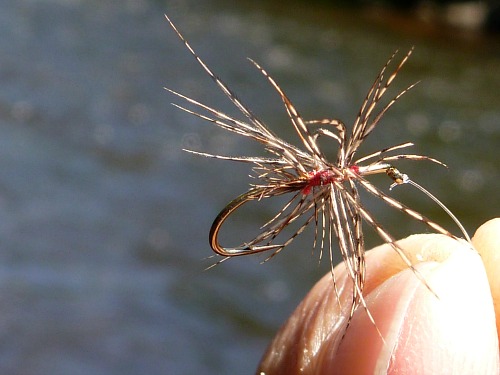 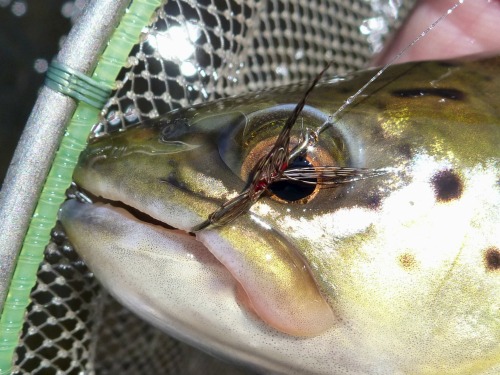 It worked, though! Sunday was not a "many" day by any stretch of the imagination, but half my fish came on the Red Disheveled. It might have ended up being more than half but I lost it on a snag.

I don't think it will be a "one fly" but then I can't imagine fishing all the time with just one fly. That would take a lot of the fun out of fly fishing.