The goal for the trip was to do a little keiryu fishing. It had been a long time since I had gotten out with one of the long rods. I went to a stream that I rarely fish. It seems like every time I go there, I spend a lot more time driving around, trying to find a spot to fish than I do actually fishing. That is mostly because the stream is far enough away that I always get there long after the guys who live nearby. The places I want to fish always have fishermen in them already.

Not on Sunday. I didn't see another fisherman until well after noon. I did spend a lot of time driving, but only because the stream was extremely high and the color of chocolate milk. It took a while to get far enough upstream to find clear water. 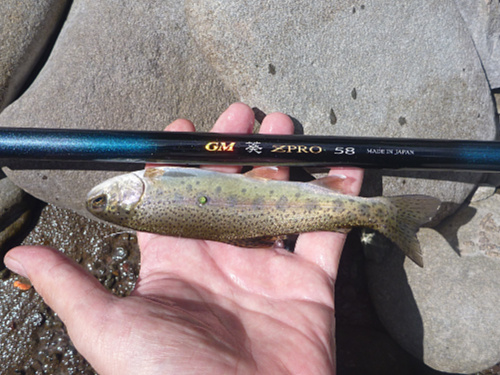 Once I found water I wanted to fish, it didn't take long to find some fish, though. The water there was shallow enough that I didn't want to use my standard keiryu rig, which uses a single BB shot for weight. Instead I used a pair of size 6 Dinsmore shot a few inches apart. Compared to one larger shot, two or three smaller shot are less likely to get caught in the rocks on the bottom. 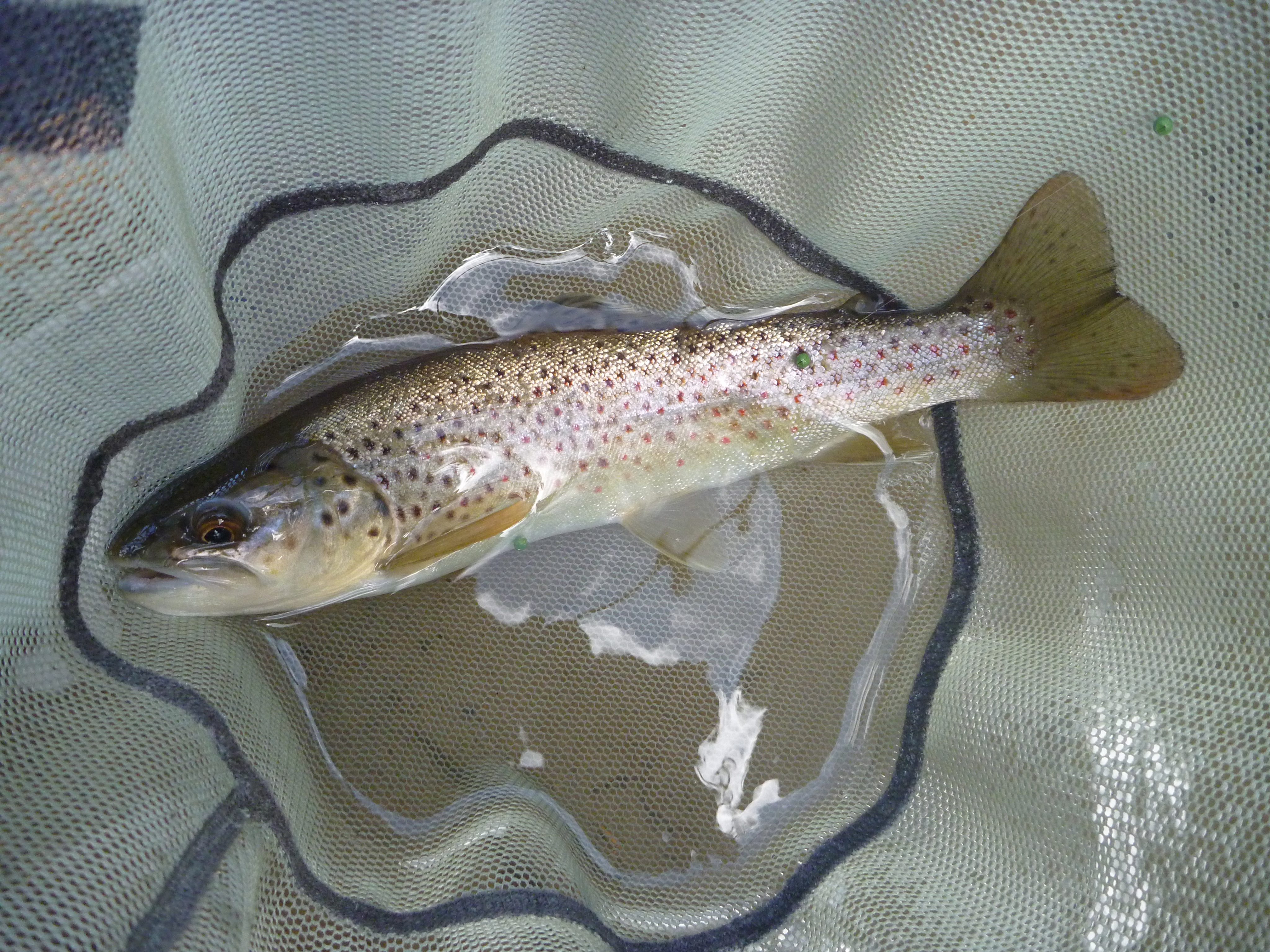 The stream has wild rainbows and stocked browns. I'm sure the state fisheries biologists have a reason for stocking browns in a stream that supports natural reproduction of rainbows, but I'd have to say I wish they didn't. I think the studies from when Montana stopped stocking revealed that the end of stocking led to a dramatic increase in wild fish the following years. Personally, I'd much rather fish for wild rainbows, which are pretty rare around here, than for stocked browns which are in nearly every trout stream. 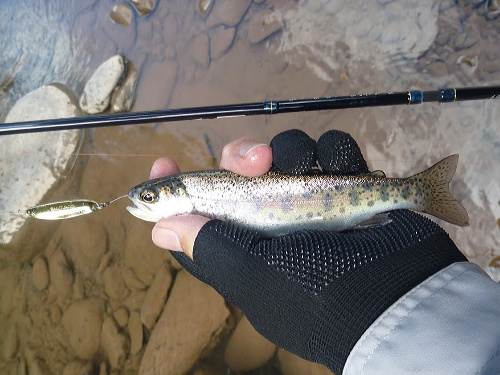 After I had fished about a quarter mile of what looked like the most productive water I'd seen that day, in which I'd caught a few rainbows and a few browns, I went back over the same stretch with an ultralight  spinning rod.

After my latest spin fishing trip (Finesse-Fishing Trip Report 8-4-19), when I had gotten many hits on a Shimano Slim Swimmer 3.5g spoon but every single fish wriggled off the barbless hook, I wanted to try the same spoon with a Cultiva S-21 replacement single barbed hook to see if it made a significant difference.

It did! (At least with 7" fish it did.) I don't have a problem keeping 17" fish on barbless hooks. But 7" fish? Most wriggle off a barbless hook on the way to the net. The micro-barbed Cultiva S-21 keeps them on the hook and unhooking them is still easy.

I was also a little surprised at the number of fish that went for the spoon after I had already fished that same stretch with a worm! I think the flash of the spoon draws them from further away. If the worm (or your fly) isn't in their feeding lane, they may not see it. On a small stream with clear water, though, they can see the spoon even if it is quite a distance away.

It is surprising to see how far they will come for it. That is one of the things I truly like about spin fishing. You can see fish chase down a spoon from 10 or 15 feet away, occasionally catching it when there's only a few feet of line beyond the rod tip.

On any given fishing trip, I usually have several rods with me, and for the last couple years those rods usually include both fixed line and spinning or baitcasting. In the future, I think I will try fishing the same water a second time with a spoon or plug after having gone through it with a fly or worm.

I think for that to work, though, I would have to have fished from the bank the first time through. Wading down the middle of a stream is going to scare the fish and give them lockjaw for quite a while. Luckily, the water level for this particular stream varies tremendously, so in most places the shoreline was cobble and then grass rather than bushes and trees, making it easy to fish nearly the entire stream from shore. 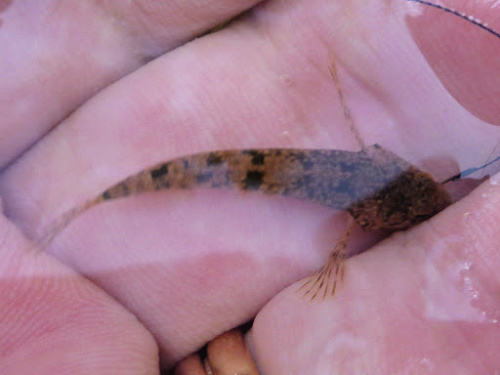 Yes, the sculpin was THAT small. My finger is not that fat! I hadn't planned on a micro fishing day, but when I saw a sculpin scoot under a rock, I had to stop to see if I could catch it. Following the previous day's micro trip, I made sure I had tanago hooks with me, including the Gamakatsu Ultimate, which was just the right size for this little guy. I should have brought a Micro Photo Box!

For bait I used speck of worm - which I had for the keiryu fishing. I don't know if it would have taken 1/4 of a Nikko Sashi but it might have. It probably would have taken a tiny speck of salami from my lunch sandwich.

For a micro rod I used just the tip section from the Aoi ZPRO. (In retrospect, the top two or three sections would have been better. To be honest about it, though, rather than taking apart a rod and risking dropping the grip screw cap or a rod section into the stream, a 3' Daiwa Hinata Tanago rod would be better yet!) Most of the micros, which appeared to be blacknose dace, were skittish and I couldn't get close enough with just the tip section. The sculpin hid under a rock when I approached, but came out when I placed a bit of worm right beside the rock. 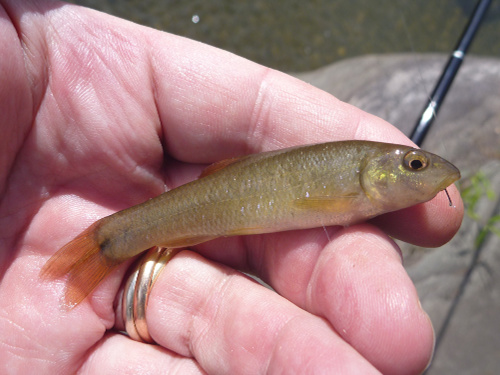 Most of my micro fishing catches are from sight fishing. I see the fish and try to get the fly or bait right in front of it. This catch was different. I was fishing for trout along an undercut rock ledge on which I was standing. I didn't see the fish or the take, or even the line where it entered the water. Watching the line where it was visible, I saw it hesitate so I raised the rod tip (which is generally all it takes when keiryu fishing).

I had moved to a small tributary and switched from the Aoi ZPRO and traditional keiryu rig to a TenkaraBum Traveler 44 and an Ultralight Worm Fishing rig consisting of some Sunline Visible Free white nylon line, 7X tippet and a single size 6 shot.

The small red wiggler and size 20 Varivas 2300 midge hook were not too large for this cutlip minnow, and the nylon line was not too heavy for the take to register. I'm not a lifelister, but both the cutlip minnow and the slimy sculpin were fish I had never caught before. That always adds a little something to a fishing trip.