About the time I started tenkara fishing I ran across a fly pattern called the Infamous Pink Worm, developed by a guy whose internet alias was Fred of York. Basically it was a San Juan worm tied with bright pink Ultra Chenille. Fred added a bit of orange dubbing around the hook shank to represent the band you see on night crawlers. After the first few I tied, I left off the dubbing and found the fly to be just as effective.

Recently, the Squirmy Wormy and San Ron Worm are catching a lot of fish, but they are essentially the same thing with a pink silicone material instead of chenille.  I don't know if the silicone worms are more productive, but the pink chenille ones still catch fish. 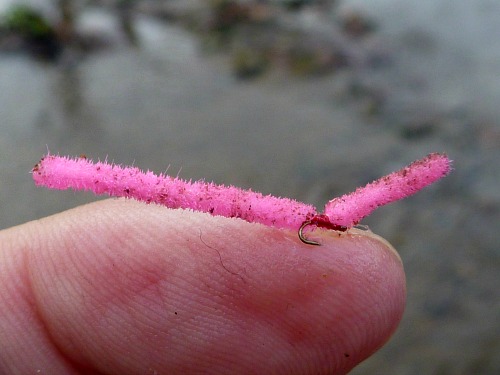 After a few drifts (you can tell it's been rolling along the bottom).

Ultra Chenille is thin enough that I thought it might be an effective fly even if tied with the Tiemco 518 #32 hook. Since the rules for the TenkaraBum Winter Challenge place such a premium on using the smallest hook possible, I wanted to see if it would work. It does. 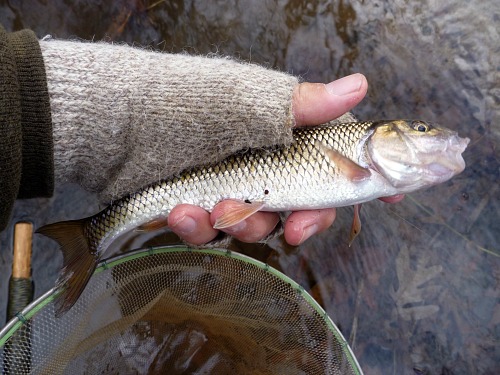 In a sense, it's a rule beater, in that it satisfies the rule of using a small hook but it isn't a small fly. Overall, the fly is about an inch and a quarter long - certainly large enough for a fish to see easily and large enough that even a sluggish winter fish might be willing to move a bit to take it. 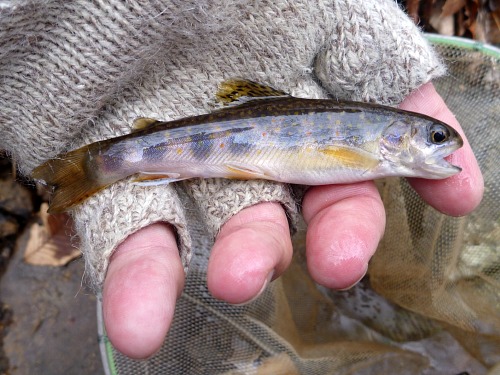 Earlier in the day I fished a size 26 bead head black Killer Bugger as a dropper off a CDC & Elk. I had one little guy hit the Killer Bugger but I didn't hook up. I launched him from one pool into the next one downstream, but then he was gone. A bit later I did catch the small brookie above on the CDC & Elk, but the action was slow.

Only after moving to a different stream and putting on the pink San Juan worm did the action pick up a bit. Overall, it was still a fairly slow day, with just three trout and one fall fish. For mid-December I guess I can't complain, though.

It was the first time I caught fish on the new Nissin Royal Stage Tenkara  320 6:4 rod. It's a soft rod but I am sure it can handle fish quite a bit larger than the 10 incher below. 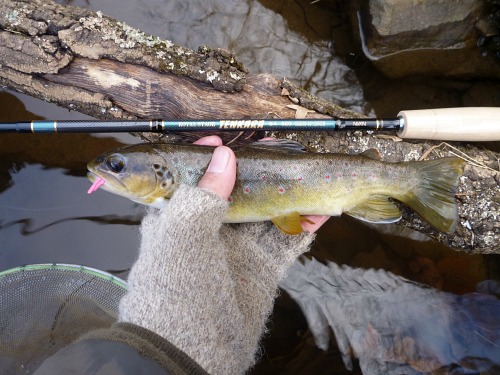 The size 32 San Juan worm works but isn't really practical. The same length chenille with a larger hook would be more effective. I missed more fish than I hooked, as the tiny hook often either didn't catch or didn't hold. I wonder if one of the rubber legs used on panfish poppers, maybe 3/4" or 1" long would work as a midge larva when tied with the #32 hook. As usual, more research is required.