Following my AHA! moment a few weeks ago, when I learned the value of fishing with a longer line, I wanted to try actual honryu tenkara with a longer rod and an even longer line. On Sunday I went to the Farmington River in Connecticut to give it a try. I brought a number of 4.4 and 4.5m rods, and a number of 7m lines.

The results were interesting but the day was not an unqualified success. Clearly, the main cause for the mixed results was my own inexperience, but a few things did make it a bit more difficult.

Most of the Farmington, like nearly every eastern stream, is heavily wooded, with trees growing right up to the river bank. There is no room for a back cast unless you have waded quite a ways into the river, or unless you are casting almost directly upstream or downstream. Depending on the flow, you may not be able to wade very far into the stream.

If I can get into a position where the flow is from my left to my right, then it generally isn't a problem. I cast with my right hand, and with the flow from that direction I can angle the rod so my back cast goes downstream and my forward cast goes upstream, missing streamside trees. Where I was on Sunday, the flow was from right to left, and unfortunately the flow was too high to wade to the other side of the stream.

For much of the day, there was a breeze blowing downstream. That didn't affect all the lines I tried to cast, but it had a huge effect on the Fujino Soft Tenkara Long type, which is nylon. When the breeze died, I could cast it with some of the rods, but when the breeze came up I could not cast it at all. 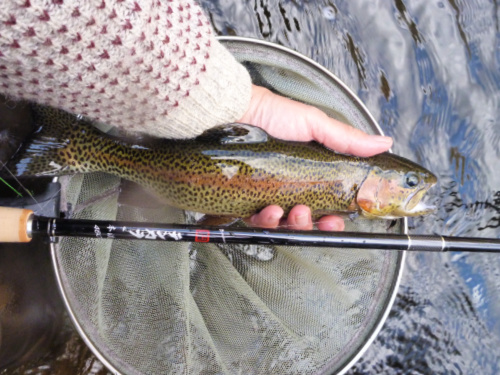 The only fish of the day

The day yielded just one fish in the net, which for me is pretty much par for the course during the winter. However, it was a perfect catch - at least in terms of what I was attempting to do for much of the day.

My goal was to fish bank eddies on the far side, which is my impression of how honryu tenkara is often done in Japan. For that fish, I managed to place the cast in a bank eddy, gave the fly about two gentle pulses and the fish hit. Perfect.

Most of the time, though, I couldn't even come close to reaching the far bank. I'm not a good judge of distance, but where I fished on Sunday, a 4.5m rod and 7m line generally wouldn't reach much past midstream. I hadn't brought longer lines, as I think going to longer lines is a journey best taken in small steps.

Had the water been lower, I could have waded further into the stream. At low flows, I have waded all the way across the stream in that location and have fished the bank eddies that way. And really, the only reason I can see for trying to cast a 7m line with a 4.5m rod is that you can't wade close enough to reach the spot you want to fish with a shorter rod and shorter line. If you still can't reach where you want to fish even with the the longest lines you can cast, then honryu tenkara really won't help you much.

Fishing a rod for just part of a day is not enough to form a solid judgement about a rod - especially when you cannot get into a good location to cast and when you have to battle the breeze in your face as well as the trees at your back. I have fished all of these rods before, but never to try honryu tenkara with lines significantly longer than the rod. The difference matters.

That said, I was impressed with the Oni Honryu 450, and think it is probably the best "all around" rod of the four I fished on Sunday. I would say the Daiwa Expert LT H44 is the most capable at handling large fish and long, heavy lines. It did not do well with the very light Fujino Soft Tenkara 7m nylon line but was a cannon with the Daiwa floating line and the Nissin PALS SP Pro 6m line. The Daiwa Expert Tenkara L LL 45M, however, handled the Fujino line beautifully - actually surprisingly well, and better than the Oni rod. It would cast the floating line, but it clearly felt that the line was too heavy for the rod. For light lines, though, the Daiwa Expert Tenkara L LL45M was THE rod. I struggled with the Shimano. It is both very soft and very full flex, and the heavier lines seemed too heavy for the rod. I had trouble getting full turnover with the lighter lines (although the wind was blowing at the time).  I suspect that using a slightly shorter line (say 6m instead of 7m) and a fly that is a bit less wind resistant (and of course, a still day) would have made a significant difference in my ability to get full turnover.

As could be expected, the two heavier lines (the Daiwa floating line and the Nissin SP Pro line) were the easiest to cast. The Daiwa floating line, which Daiwa calls its Tenkara Fly Line, was just heavy enough that the breeze had no impact on it, but it was hard to keep the end of the line off the water, even with a fly that had a large, stiff hackle for maximum resistance to being pulled through the water. With the Nissin SP Pro, it was easier to hold the end of the line off the surface, but that line was also a meter shorter.

The hardest line to cast, or to put it more accurately, the line that most of the rods had trouble casting, was the Fujino Soft Tenkara Long Type. At least in my hands, it did not cast well with any of the rods other than the Daiwa Expert L LL 45M, but that rod cast the line beautifully.

The difference between how that rod cast the line compared to the other rods was really quite surprising. I guess it underscores a point that John Vetterli of the Tenkara Guides LLC in Salt Lake City made to me years ago. I don't remember his exact wording, but his point was that the line to use with any given rod is the line that loads the rod the best. The Fujino line worked with the Daiwa L LL45 but not the Daiwa LT H44 because it did load the LL rod but did not load the LT rod.

My only fish came with the 7m Sanyo size 3.5 line, which was easier to cast than the the Fujino line but not as easy as the Daiwa or Nissin lines. However, it was much easier to hold off the water than those two lines. I think perhaps the size 3.5 level flourocarbon line was a good compromise - heavy enough but not too heavy.

There is one other difference that probably is significant. In CO, I used a stiff-hackled kebari. In CT, I used a kebari that was much larger and much more heavily hackled. The intention was to provide more resistance to being pulled through the water, helping to hold a longer line off the surface. However, an unintended consequence was that it was much more subject to wind resistance - which clearly did make it harder to get the lighter lines to fully extend and turn over.

The tenkara rod, line and fly still act as a system. You can't just take any rod, tie any line to the rod tip, tie on any fly and be able to cast and fish as well as you'd like. For best results, you really do have to match the line to the rod and fish a fly that works with the rod and line.

Most tenkara anglers will tell you the fly doesn't matter. My last few trips, fishing a fly with no hackle, a size 12 fly with stiff hackle and a large, size 6 fly with a very large, full, stiff hackle have proven (to me at least) that the fly definitely does matter - perhaps not from the standpoint of what the fish want to eat - but definitely from the standpiont of how you want to present and fish the fly.

I have a long way to go to learn honryu tenkara. This was my first real attempt - other than briefly at the Oni School a couple years ago, when I had not brought a line heavy enough for the wind so Oni gave me one of his, which was significantly longer than my 3.9m rod. With the wind, I couldn't cast it with the soft rod I was using. I switched to a TenkaraBum 40 and was able to cast it - but not well. I was fishing a foam line in a riffle in the middle of the river rather than bank eddies, but the size of the river and the length of the line make it qualify as honryu tenkara. I did get a few hits but didn't hook any. Trying to cast the long line in the wind was extremely frustrating - to the point that after I got back home I never tried it again. I've changed my mind, though, and now I do think trying to learn honryu tenkara will be worth the effort.