For most of the day, I fished with a Nissin Royal Stage Honryu 330, which at 10'10" is quite a bit shorter than most people think of when they think of honryu rods. As with the Nissin Royal Stage Honryu 390, and the Nissin Air Stage Honryu rods (380 and 450), it is quite long when collapsed - making it a much better rod for fishing streams you can drive to rather than hike to. I don't know if that is why Nissin calls it a honryu rod, but whatever they call it, I like it!

Compared to Nissin 320 rods like the Royal Stage Tenkara or Zerosum Tenkara, the Honryu 330 action seems to be between the 6:4 and the 7:3 - firmer than the 6:4 but not as tip flex as the 7:3. I was able to cast 14' of size 5 nylon and size 3.5 fluorocarbon, getting complete turnover of the 5' tippet without a problem (although I did use a wool bodied fly tied on a heavy hook). 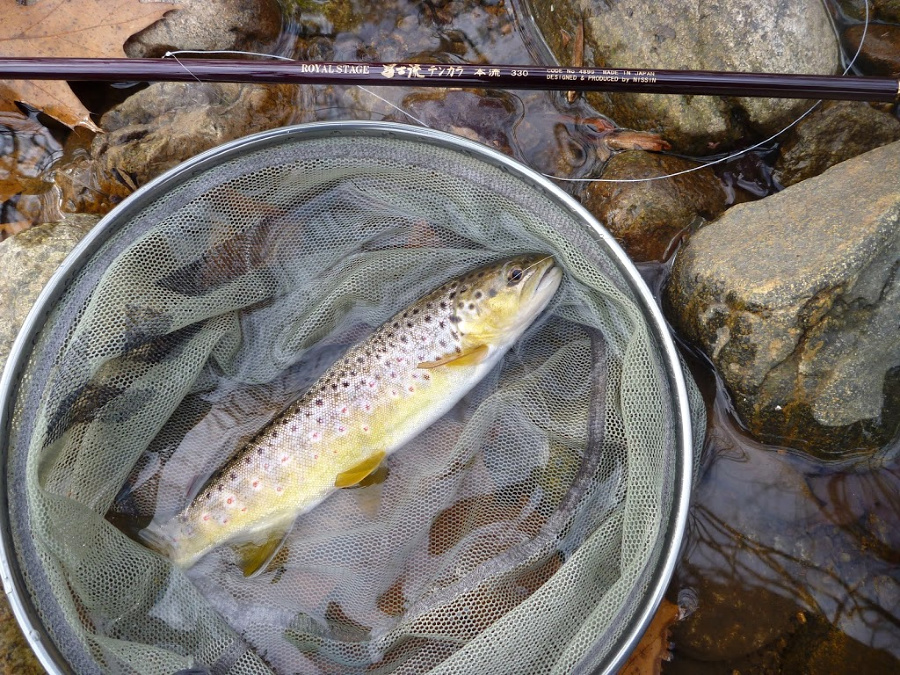 Now that I stock the modified ZimmerBuilt Tenkara/Spin/BFS Guide Slings, which have a second row of shock cords, the Royal Stage Honryu 330 is a lot less inconvenient to carry. It fits in a Long Rod Case, which the ZimmerBuilt Tenkara/Spin/BFS Guide Slings hold quite securely (without the case towering over your head and catching on low branches). I spent a little while fishing with a TenkaraBum Traveler 27 and Traveler 39, with the Honryu 330 in a Long Rod case on the Guide Sling. It presented no problem whatsoever.

The water was low and clear, and I do think having the extra few feet of line helped. I am sure the rod could have handled another couple feet of line had I tried it. I had cut the lines before leaving home, so I wasn't able to try longer lines.

Earlier in the season, with higher (and warmer) water, the fish are pretty spread out. On Sunday, they were concentrated in a few deep holes, many of which seemed to be around the root systems of streamside trees.

For most of the day, I fished with a size 5 white nylon line. It was a gray overcast day, and I thought the white would be more stealthy than a hi-vis fluorocarbon line. Even though size 5 sounds like a heavy line, because it is nylon it really isn't very heavy at all. You do get some line sag, but not enough to make it hard to hold the line off the surface (as long as you are using a fly that resists being pulled through the water).

Later in the day a breeze came up and I changed to a Sanyo Valcan size 3.5 line. It was both heavier and denser than the size 5 nylon, and was easier to cast into the slight breeze. It did sag more than the nylon, but with a stiff-hackled kebari it wasn't a problem.

Actually, I have become convinced that you want some line sag. For the longest time, I thought line sag was a problem to be minimized. After all, the more your line sags, the more tippet you have in the water, and the more chance that at least some of the tippet will be in water flowing at a different speed than the water immediately surrounding your fly - which will create drag.

However, if you are manipulating your fly it is moving anyway, and the movement is intended to give it the impression of life. Mayflies sitting on the surface don't move but things under the surface do swim! Movement relative to the surrounding water indicates life! Having a little more tippet in the water doesn't seem to be a problem.

Line sag also gives the fish just a little slack so it can turn before it feels tension from the tight line. It gives you time to see the line tighten before the fish feels the tension. For all but one of the day's tenkara-caught fish, I saw the line tighten and then set the hook. For that other one, the fish hit just as I picked up for a new cast. I didn't miss any hits (until I changed what I was doing). 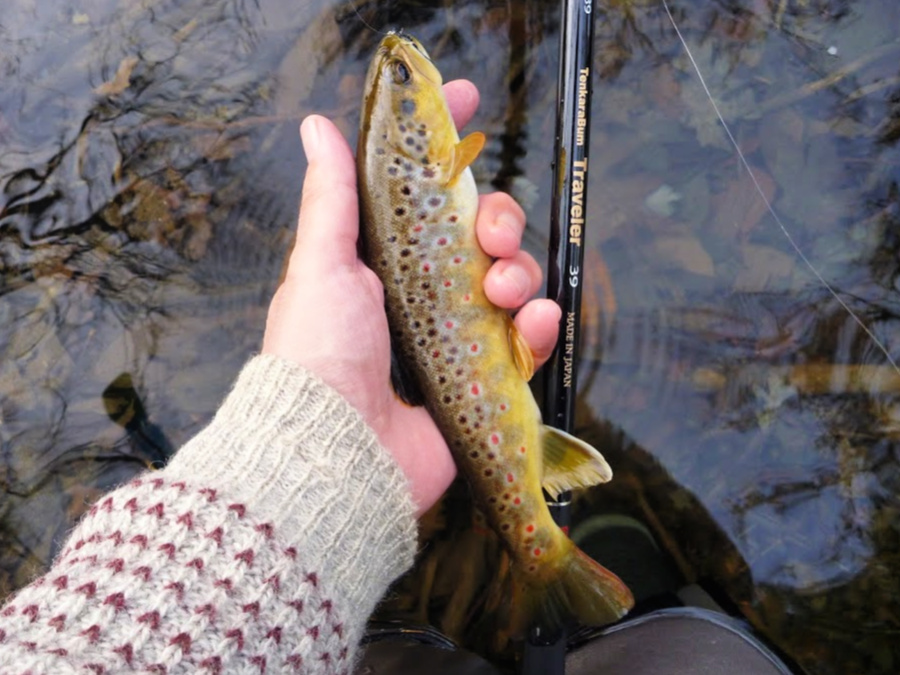 Later in the day, in one particularly large, deep pool, I fished bead head Killer Bugs and Killer Buggers with a TenkaraBum Traveler 39. I used a keiyu line with yarn markers, and the current in the pool was slow enough that for most of the drift the line was very nearly perfectly straight.