When it comes to fishing, I'm easily pleased. Like most anglers, I don't like to get skunked, but unlike many, I don't need to catch a lot of fish to have a good day. On Sunday, I caught one fish, a brown trout (probably a stockie) of just over 12". That made it a good day.

After taking care of some errands, I got to the stream a little before noon. Instead of starting where I normally do on the stream, I went straight to a spot where I had caught some of my largest fish (and not just for that stream, but largest tenkara-caught fish anywhere).

Nothing - at least nothing that couldn't have been a rock. When fishing wet flies, from time to time the fly just stops. Sometimes it's a rock or a stick and sometimes it's a fish. I try to fish a relatively tight line, keeping the line off the water to the extent possible. Any movement in the line that I didn't cause myself, or that wasn't obviously caused by the current or a little wave is treated as if it's a fish.

I try not to strike hard - aggressive strikes can break rods. I lift the rod tip, almost questioning "Ae you a fish?" If it is a fish, I get a headshake. If it is a rock I get no movement at all. Sometimes, though, there's just a "bump" and then nothing. Some bumps are obviously fish - there is a brief pull and then nothing. Some bumps are indeterminant. Could be fish, but could be the fly catching on some moss and then letting go when my tightening the line pulls it free.

Over the course of the afternoon, I got a few bumps but nothing I was sure was a fish. 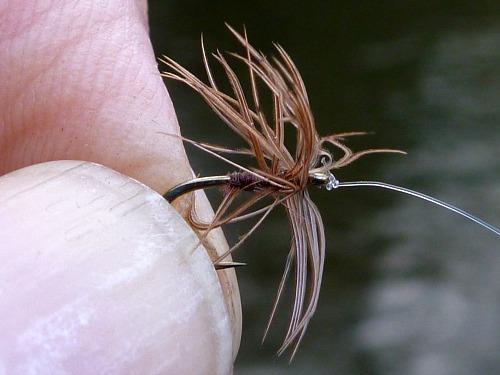 One of the more questionable bumps came when I was fishing with what was initially intended to be a Stewart Red Spider. WC Stewart tied his Red Spider with yellow silk and a feather from the landrail (also called corn crake), which I don't think is available even in the UK anymore, let alone in the US. The feather I used for this fly was a covert from a bobwhite quail wing that one of my customers sent me. The hackle isn't landrail and the silk isn't yellow, so it clearly isn't a Stewart Red Spider.

It didn't catch any fish but it did catch a tree on an errant back cast, so  when I replace it I will use yellow silk to be at least a little closer to the original. (This is about as close as I come to being a one-fly angler. Sometimes I just tie one of a new pattern. One fly. When it's gone, it's gone - at least for that outing).

After a while I moved to a different spot and changed rods (I'm not a one-rod angler, either). If I think there is a good chance for a larger fish, I'll fish a rod I know can handle a larger fish. If I don't expect to catch anything over about 12" I'll fish a lighter rod that I like better. After the move I fished a Nissin Air Stage 390, which I am coming to really like. 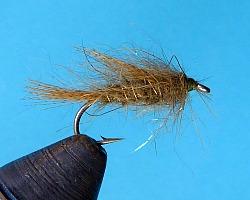 Before I had sent it off to John Vetterli to fish side by side with his Oni rod (to see if I am the only one who thinks they very similar) I fished the Air Stage 390 with size 2 and 1.5 lines. Sunday was pretty breezy and I fished a size 3. I've never been able to cast a size 3 line into the wind before. Nice rod.

I also switched to one of my last remaining Birds Nest flies that jd_smith used to tie. I'm not sure what it's supposed to represent. It seems to be a generic nymph not unlike a Gold Ribbed Hare's Ear. It does catch fish, though.

It caught the only fish of the day. 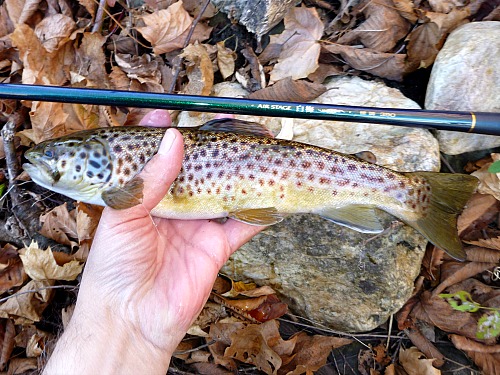 A 12" fish is not what I'd call a big fish, but the Air Stage 390 is not a big fish rod. A fish of this size is still a lot of fun and is well within the capabilities of the rod.