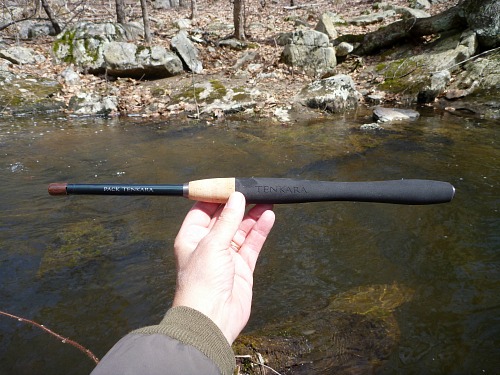 The Shimano Pack Tenkara 31-34 ZW collapses to less than 17 inches.

As with other Shimano tenkara rods, it has a hollow tip section. That gives it a slightly different action than most other manufacturers' rods, which generally have solid tips. When casting the rod, my first impression was that it is a relatively firm full flex rod, with a casting stroke that felt almost slow and deliberate. When wiggling or casting the rod, it seems to bend in the middle of the rod but not in the tip area (which is a characteristic of hollow-tipped rods).

The action reminded me a little bit of the now discontinued Shimano LLS36NX. With the hollow tip, the LLS36NX produced the most effortless, tight loops I have ever achieved with a tenkara rod. The Shimano Pack Tenkara rod is more full flex than I recall of the LLS36NX, though. The LLS36NX clearly seemed to do best with a size 4 line but it had a penny rating of 22. The 31-34 ZW has penny ratings of 15 and 16.

Tom Davis of Teton Tenkara used a size 3 line for his review of the 31-34 ZW, but "felt that the rod was designed (and begging) for a lighter line." One customer who has and loves the rod says the best line for the Shimano Pack Tenkara in his opinion is the size 2 YGK line. I come in pretty much between the two. I felt the rod did just fine with a size 2.5 line at full extension. At the shorter setting, the rod definitely felt firmer (less loading from the rod's own inertia) and I thought it did better with a size 3 line. I like the rod a lot better at the 340 length than the 310 length.

If you have never fished with a hollow-tipped rod, it will take some getting used to. If your current favorite rod is a Shimano LLS36NX or a Shimano Keiryu Tenkara 34-38 ZL, there is a good chance you will absolutely love the Shimano Pack Tenkara.

So far, all the people who have given me feedback on the rod do love it, saying it's just what they wanted in a short pack rod. 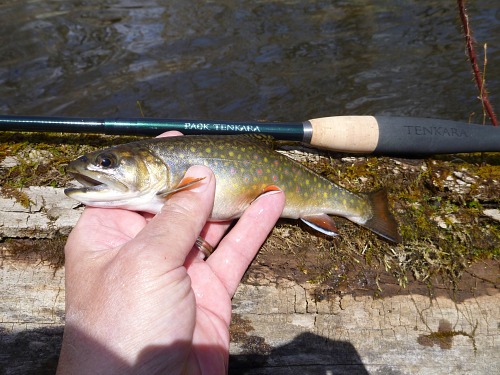 Although I would describe the rod as a full flex rod, it does not feel like a soft rod. With a penny rating of 16 at the shorter 3.1 meter length and 15 at the 3.4 meter length, the rod can handle larger fish than you are likely to find in the headwaters. If, however, the small, overgrown streams you fish hold 14 inch trout in fast current, you will appreciate the penny rating. 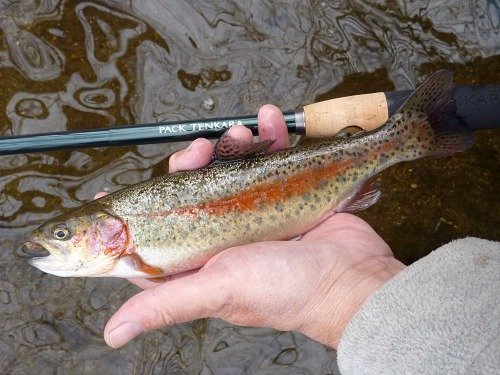 Not a bad rod for smaller stocked streams, either!

Given the short collapsed length and the clear intention to target backpackers, I suspect the rod will be compared with the Tenryu TF39TA and perhaps the Tenkara USA Hane or Daiwa Keiryu-X. Neither the Hane nor the Keiryu-X are zoom rods, though, and both are quite stiff, so most of the head-to-head comparison will likely be with the TF39TA.

The Shimano Pack Tenkara is shorter when extended than the Tenryu TF39TA but longer when collapsed; it has two lengths compared to three for the TF39TA; it's a bit heavier, and has a hollow-tip action that is not what most people are used to - all of which suggest that the TF39TA will keep its most ardent fans.

However, the Shimano Pack Tenkara is less than half the cost of the Tenryu TF39TA (and it is generating its own ardent fans)!

The Shimano Pack Tenkara comes with a Hard case

For years now, I have written that no Japanese tenkara rods come with a rod case. Now I have to go back and change all those comments. The Shimano Pack Tenkara comes with a hard case. The case is surprisingly heavy but it is also probably bulletproof.

It reminds me of what once happened to the guy I go to Maine with on my bass fishing vacations. Years ago, he went on a horseback pack trip in Wyoming. On the very first day, the mule that was carrying much of the gear fell and landed on this guy's brand new, never-used, multi-piece pack fly rod. The rod broke before he got to cast it even once. (He may believe in omens because I don't think he has touched a fly rod since - or a horse for that matter.) Had he instead had a Shimano Pack Tenkara rod in the factory case, the mule would have broken a rib but the rod would have survived unscathed. If you have a mule to pack your gear, bring the case. If you are an ultralight backpacker, though, and have to carry your own gear, the case will never leave your car.

The Shimano Pack Tenkara grip is similar to the grips on the Shimano Keiryu Tenkara and Honryu Tenkara rods, with a short section of cork at the front of the grip and a hard EVA foam on the rest of the grip. The shape is the familiar two-hump camel shape, but with a subtle difference. The front part of the grip is noticeably thicker than on the other two rods. If you have large hands you may welcome the larger diameter. If you do not have large hands, it will feel strange. 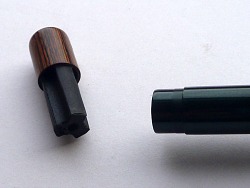 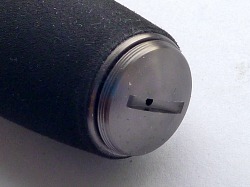 The tip plug is wood and rubber, with the rubber section heavily fluted. It will be easy to insert the tip plug when the line is still attached to the rod, which is a nice feature when you are backpacking.

The photo showing the tip plug also shows the small amount of the zooming section that extends beyond the grip section when the zooming section is not fully extended. Although the exposed length is much, much shorter than on any other zoom rod I know of, it actually works just fine.

To extend the rod fully, when you push out the next smaller section just keep pushing. That will then pull out the zooming section. Pretty easy. That there is only a short amount of the zooming section showing beyond the grip section is no problem when collapsing the rod. It is really very easy to push it in as far as it will go.

The grip screw cap is metal and has a coin slot but no knurling. Do not make the mistake I did and try to loosen the screw cap by using your thumbnail in the coin slot. It will slice your thumbnail to the quick before you realize what is happening. You absolutely must use a coin.

Shimano does not give a range of recommended tippet strengths. Most Japanese tenkara rod manufacturers recommend tippet no stronger than Japanese size 1.2, which is equivalent to 3.8X. Personally, I would use 5X. Very few small stream fish will test the limits of 5X tippet.

All in all, the Shimano Pack Tenkara 31 - 34 ZW is a rod that backpackers can love and Shimano fans will love.

Rod made in Indonesia

It's an impressively balanced rod.

I will surely be using it a lot for backpacking.

Best casting rod I have. 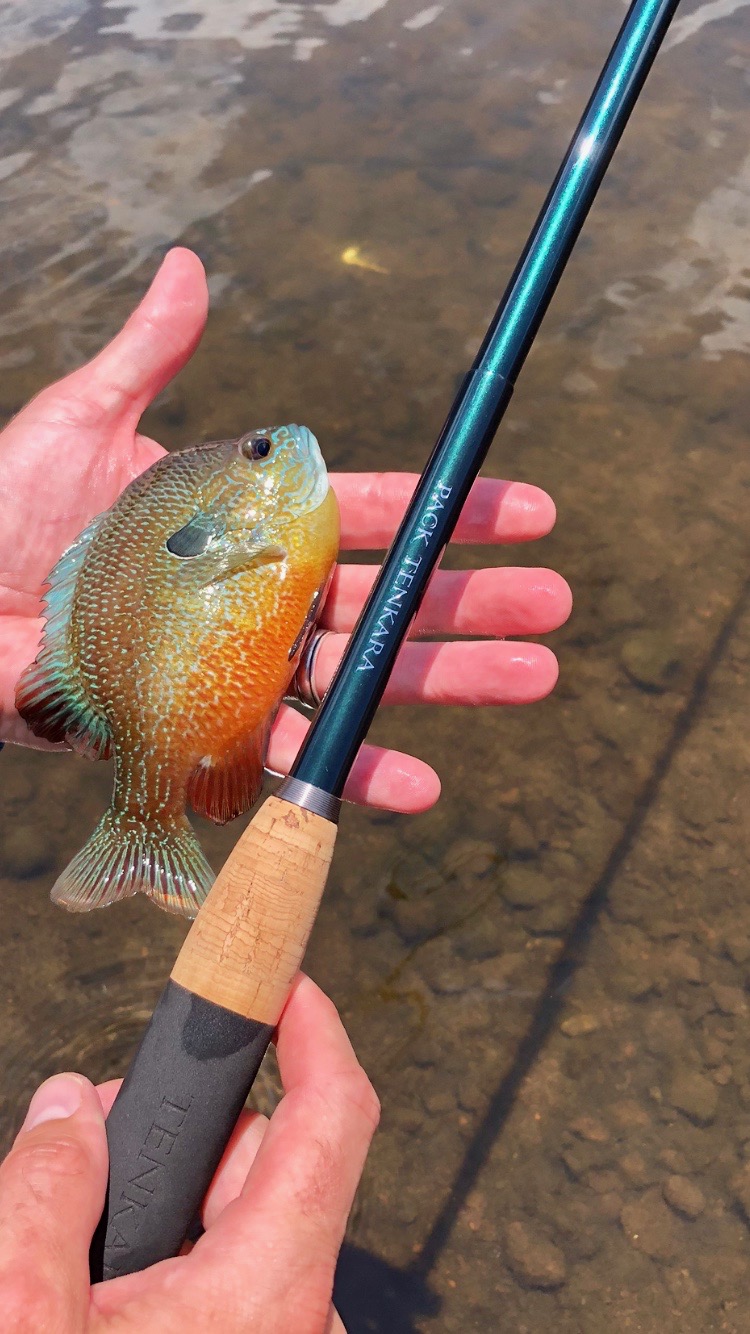 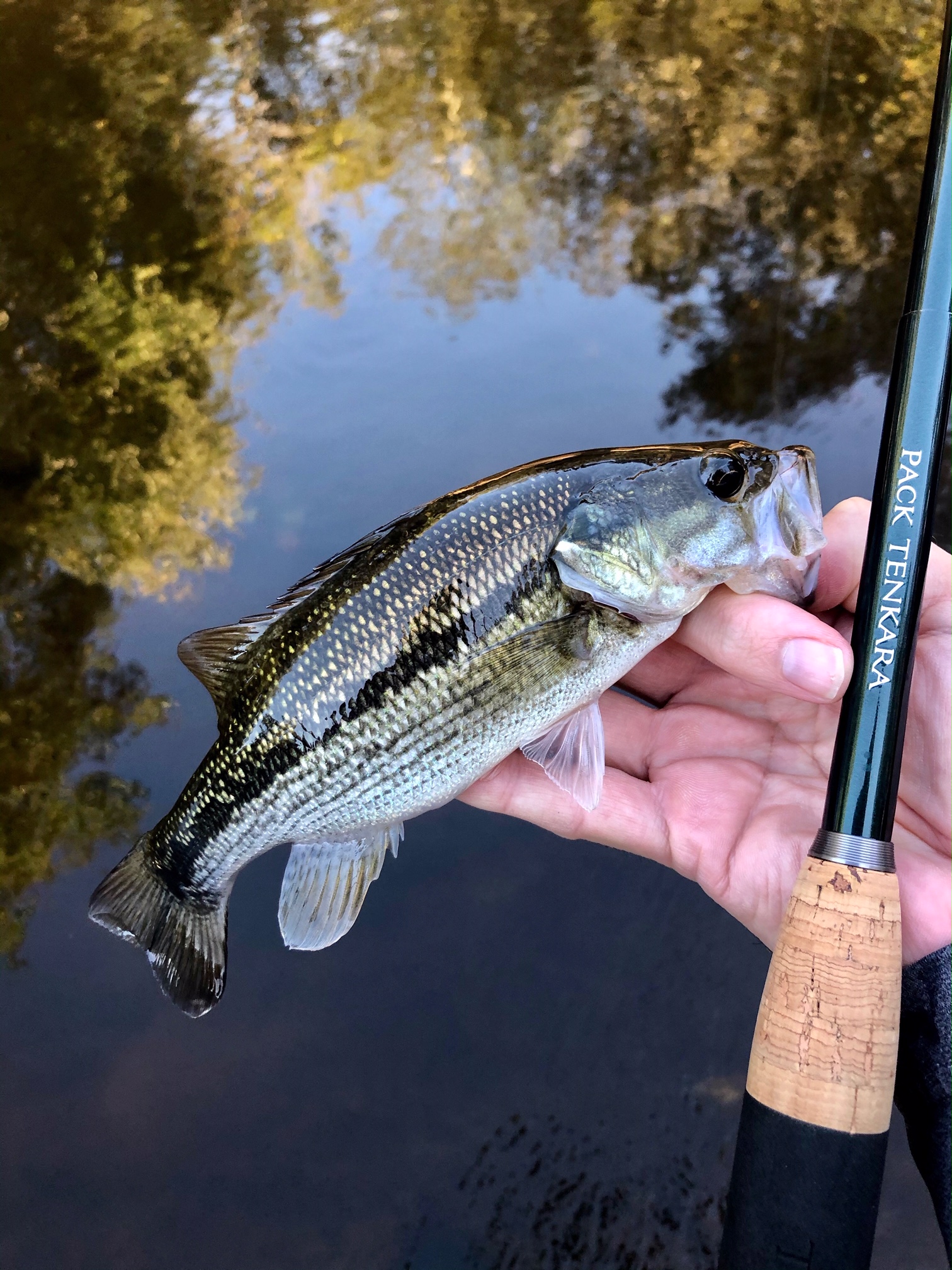 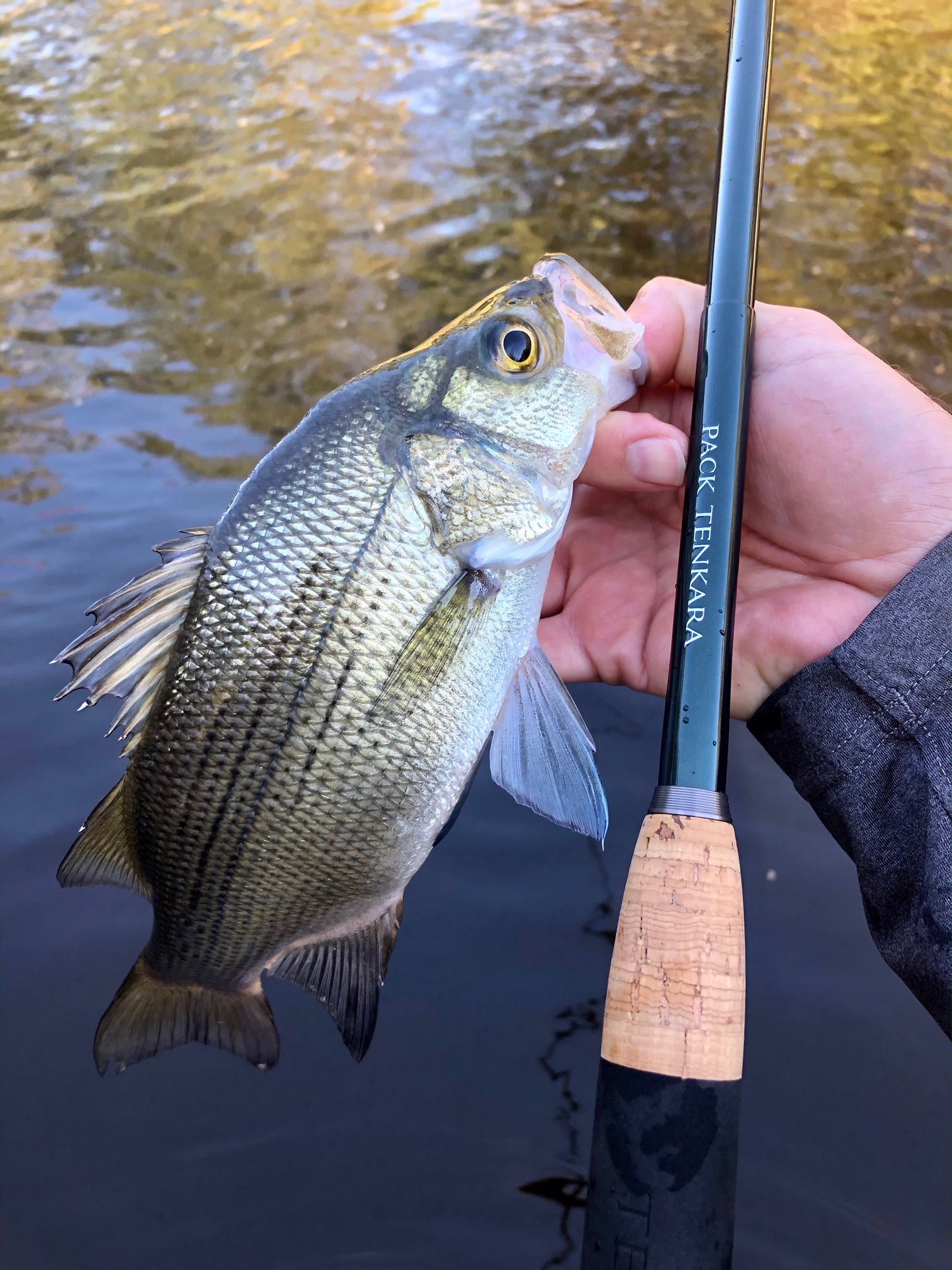 The rod clearly is designed as a backpacking rod and in Japan would be used only on trout streams. However, as the photos above show, it is at home on any small stream.
(Jeff R photos)