It wasn't supposed to happen this way.

I was fishing a small stream in Rocky Mountain National Park. As usual I was fishing the longest rod I could get away with, and for that stream it was a 330cm rod (about 10 1/2'). I'd caught a few fish, mostly 7-9" browns and one nice rainbow of maybe 11" - just the size of fish for which I've often said the Iwana is a great choice.

I had come to one of the wider pools, one of the few for which I could not cast the full width of the stream. Dead drifting an orange bodied Sakasa Kebari just off some submerged rocks, the line stopped.

I set the hook and got maybe not the surprise of my life, but certainly the surprise of a three week fishing trip. It was a much larger fish than I ever would have expected to catch in such a small stream. At 18 3/4"' it was also the largest trout I've caught on a tenkara rod. Even more surprising was how quickly the little rod was able to get fish to the net. Had Brian Flemming not been taking photos (with a camera that time stamps to the nearest second) I never would have believed that the elapsed time from strike to net was less than a minute.

So much for needing a "big fish" rod. 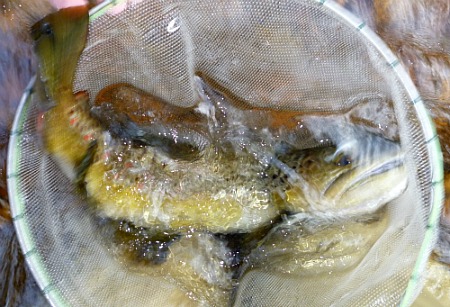 Another surprise on the trip was fishing hoppers on a meadow stream in the Park. Rather than an Amago or Yamame and heavy line, I was using an Ayu with a size 3 line. As long as I didn't have to cast into the wind, it worked just fine. I later switched to the Ito at full extension and a size 4 line, and even though the rod is softer, if anything it worked better. I'd love to show a photo of the 16+ incher (the largest for the day) but my camera was gone. Luckily, instead of dropping it in the tall grass the last time I used it, it had accidentally slid it into my hippers instead of the front pocket of my fishing pants.

So much for needing a stiffer rod to cast a wind resistant fly.

I'd still recommend the longest rod you can get away with for any particular stream, but beyond that, I'm changing my views. Choose the rod by the action you prefer without worrying so much if it is a "big fish" rod or a "big fly" rod. The rods are capable of more than we expect.

I would also recommend the lightest rod you can get away with. I see no point in fishing with a 3.6 ounce rod when you can use a 1.6 ounce rod that has almost exactly the same action. I used the Ayu and Ito only because at that time I hadn't yet learned that there are lighter rods available.