One Sunday not long after I got my Ayu (more than two years ago, now) I sent Daniel Galhardo at Tenkara USA an email stating "The Ayu is a great trout rod. It isn't a bass rod." I'd hooked a bass earlier in the day that I couldn't keep out of some brush. I had assumed that had I been fishing with a stiffer rod I would have been able to control the fish. Perhaps. After that first day, I never again fished for bass with my Ayu.

However, the difference between how far a fish could run when hooked on an soft rod compared to a stiff rod can only be a few feet. Of course, those few feet could certainly cost you a few fish.

Anyone fishing with a tenkara rod, though, accepts the idea that there are fish he or she cannot catch. Large enough, powerful enough to break a 5X (or even 4X) tippet. Losing the occassional bass to a brush pile is the price to be paid for fishing with a softer rather than a stiffer rod.

Today I decided to pay that price, and went bass fishing with a softer rod and what I call a Sakakibara Kebari. Named after Sakakibara Masami - Tenkara no Oni - the Sakakibara Kebari is a very large Sakasa Kebari. Sakakibari-sensei ties them in size 4 or even size 2. 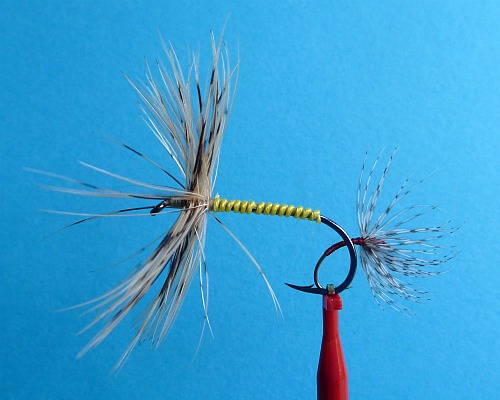 I couldn't bring myself to tie them that large and tied mine on a size 6. I'm going to order some larger hooks, tough, because even modest sized bluegills could just inhale the size sixes and I strongly suspect most bass would prefer something a bit larger.

This is more about the rod than the fly, though, and I found that the softer rod performed admirably. I didn't catch any large bass today, but those I did catch were easily brought to hand. And the bluegills were a lot of fun on the soft rod.

More than that, though, I just like casting the softer rod better. Sure, it doesn't have the backbone that a stiffer rod has, but you know, that's what I like about it. If I have to lose a few bass to brush piles, or trout to swift current, so be it.

When it comes right down to it, the rod to fish with is the one you most enjoy fishing with. Realistically, you'll probably catch just about the same number of fish.