I spent a day not long ago on one of my favorite streams, on a section I don't get to often because it is beyond walking distance from the nearest train station. It was the first day I'd fished it after I had gotten my first of the Kiyotaki rods. I hadn't even fished it with one of the shorter Soyokaze rods for that matter.

As usual, it was a rod/line testing day. I fished two rods. One was a fairly standard length for a tenkara rod (between 11 and 12'). The other was right at 7 feet. I started the day with the tenkara rod. After catching a few fish in a wider spot in the stream I moved on to a different section that was quite a bit narrower and more overgrown. The 7' rod actually worked fairly nicely (although an 8 footer would have been a bit better). This is an area of the stream on which I had previously always fished an 11' rod.

I was really surprised at the number of spots I could effectively fish with the short rod that I always had to pass up before - spots I that I had never even realized that I couldn't cast to. I don't mean whole sections of stream, but a lie here and there where there just wasn't room to cast an 11' rod. Not surprisingly, many of these hard-to-fish spots held fish!

It turned out to be a very respectable day - with almost all the fish coming on the 7' rod. The largest fish of the day, at 12" came on the tenkara rod. The most heart-in-the-throat exciting, though was a 10 incher in a pool not much bigger than a bathtub with low branches protecting the pool and little room for a back cast. There is no way I could have made that cast or that catch with an 11' rod. 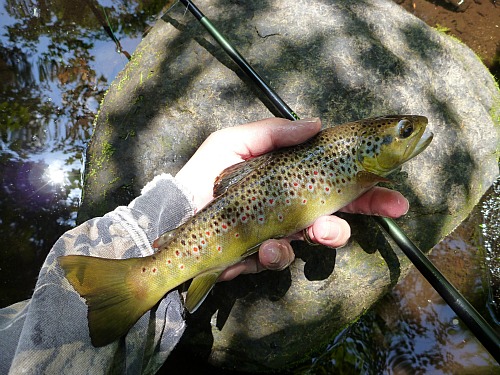