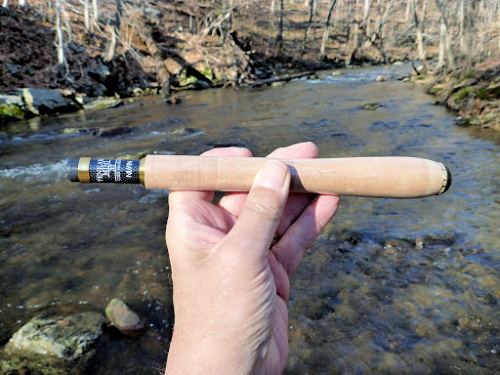 Even though the rod feels just a bit stiffer, I have a hard time believing it is enough stronger to justify a radically different tippet recommendation. I am beginning to think that tippet recommendations are completely independent of rod strength, but instead are rough guides for beginners, i.e. the tippet sizes that most tenkara anglers use

I routinely tell potential buyers that the Pocket Mini is a delicate rod, and would not be a good choice if they are hard on their gear. I think I need to give the same warning to buyers of the Tenkara Mini. It is compact rod. It is convenient rod. But it is a rod with which you must be careful. 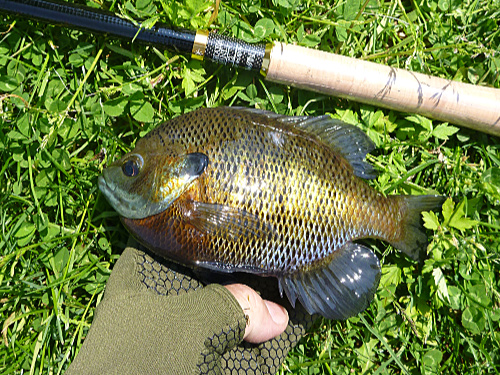 Bluegills are fun with the Tenkara Mini.

With virtually none of the blank extending beyond the grip when the rod is collapsed, though, Fuji EZ Keepers would not fit, so it would not be possible to leave the line attached while stowing the rod in a backpack. 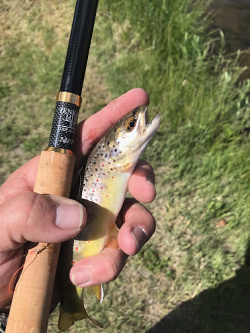 Some people are going to absolutely love these rod. You can take ithem anywhere. They will fit in your backpack, your carry-on, your briefcase or, yes, your pocket. Some people will prefer the 320 length that the Nissin Tenkara Mini comes in compared to the lengths the Pocket Mini comes in.

And yes, some people are going to much prefer the tenkara-style cork grip compared to the keiryu-style non-grip of the Pocket Mini. The larger diameter definitely changes the feel of the rod. The extra weight, right in your hand, also changes the center of gravity. The rod feels light (even though it's heavier than a Pocket Mini).

And that, I think, is what it's all about. People think tenkara rods ought to have cork grips. So does putting a cork grip on a Pocket Mini turn the keiryu rod into a tenkara rod? Well, yes, I suppose it does. It's a tenkara rod. Says so right on the box.

Tippet recommendation: Nissin recommends tippet of 5X - 3.8X. Personally I WOULD NOT USE TIPPET OVER 7X WITH THE Tenkara Mini.

Tenkara rods are used in Japan to catch fish that are rarely larger than 9-10". Japanese anglers do not break rods on 10" fish, so I am convinced that tippet ratings are no more than a rough guide, explaining what anglers generally use with the rod. I do not believe they are meant to state the strength of tippet that will break before the rod does. There is no way in the world I would use 4X tippet with this rod!