Nissin Tanago Koro are dedicated microfishing rods. I must emphasize that they really are for micros. The tanago that people catch in Japan are no more than a few inches long. If you are sure that you will not hook unexpectedly large fish, a tanago rod is just an awful lot of fun to fish with. They are so small. They are so light. It's like fishing with Harry Potter's wand or a symphony conductor's baton.

When I first carried these rods I called them "Gokoro" rods. I don't remember why. Tanago Koro (Tanago Soul) is a more accurate name.

The Nissin Tanago Koro rods pack down to just over 10" long. Rods just don't get more compact. You can fit one in any daypack, any briefcase, some pockets. I suppose it's not quite like American Express's tag line "Don't leave home without it" but it's not that far different. Most ponds and streams have minnows of some sort in the shallows. No reason at all not to fish for them - with a rod that makes them a worthy challenge. 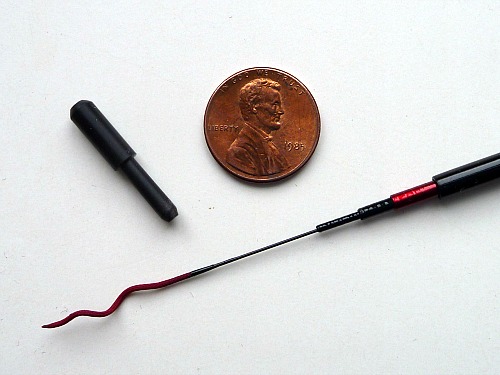 The tip section is remarkably thin. That makes it remarkably sensitive and responsive, but also quite fragile. This really is a small fish rod - and by small fish I don't mean 5" bluegills, I mean dace and darters, minnows and shiners (and 3" bluegills).

This is not a tanago. There are no tanago in the US. The short rods are useful for microfishing for darters, though, as they are often almost right at your feet and longer rods are much too long.

I believe this is a female Strawberry River darter, which lives only in the Strawberry River in north central Arkansas. I caught it with a 4' Nissin tanago rod I (which I had to choke up on because the fish was that close).

Several of the other micros I caught on my Arkansas trip were close enough to have been caught with the 3' or 4' tanago rods. I think they might also do well for baby bluegills, but be sure they are babies! One of my customers broke a tanago rod when instead of the micro he expected, he caught a large warmouth. He broke a second rod when the micro he did catch was eaten by a bullhead before he got it in.

The goal of tanago anglers in Japan is to catch the smallest possible fish. That should also be the goal of the anglers here who use these rods.

Nissin recommends tippet no stronger than 6.5X. If you don't have 6.5X, use 7X. The snells on the Owner and Gamakatsu New Half Moon and Smallest tanago hooks would be fine, so you could use stronger line from the rod tip to the snell.

International shipments are taking weeks longer than normal and tracking does not seem to be working.

The US Postal Service has suspended all shipments to Australia and New Zealand. There are two alternatives. One is the same price as the USPS had been (as calculated at checkout) but may take 3-4 weeks. The other is UPS, which is considerably faster (3-5 days), but also considerably more expensive. If you want the faster, UPS shipment, I will send an invoice for the required amount. 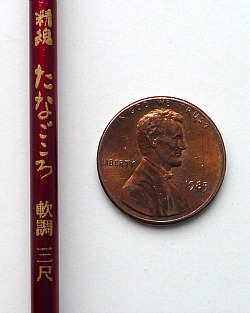