I no longer stock the Nissin 2-Way ZX rods. The Suntech keiryu rods are just so much better.

If you do want one, I can order one for you, though.

The Nissin 2-Way 450ZX rods are 4.0 - 4.5 meter zoom keiryu rods that come in several different stiffnesses. More than the other Japanese rod makers, Nissin produces the same model in different lengths and stiffnesses.

In hindsight, I should have called the rods the Nissin 2-Way Yu Yu Zan rather than the Nissin 2-Way 450ZX. They come in quite a few different lengths - anywhere from 290 to 620. At one time or another I've had all the lengths in stock. It seems like a number of rods have a "sweet spot" for length, though, and for the 2-Way Yu Yu Zan rods, I think the 450 is the sweet spot.

The 450 length rods are about as long as you can comfortably fish one handed. The 290, 330 and 380 lengths seem quite a bit too stiff for streams that are narrow enough to use rods that short. The 540 and 620 rods start to get a bit heavy compared to the Suntech keiryu rods.

I would guess that many people will fish the 450ZX rods at the 4.0m length, extending them to 4.5m when they have hooked a nice fish and want the extra length for leverage and also to reduce the amount of hand lining that may be necessary. The 540ZX and 620ZX are clearly two-handed rods, which truly reduces any feeling of tip heaviness.

The softest of the three 450ZX rods is a very nice rod for when you need the extra length but are still fishing unweighted or lightly weighted flies for modest sized fish. The two stiffer rods are really very effective rods for larger fish and larger waters.

The Nissin 2-Way 450ZX rods have different bend profiles than the Daiwa Kiyose 43M, which is another big water / big fish zoom rod to consider. The 450 ZX (medium) is close to the 43M overall, but the tip sections on the Nissin are a bit stiffer than on the Daiwa, and the butt sections aren't quite as stiff. The end result is a rod that is a bit more mid flex than the Daiwa. I like the Daiwa, as the softer tip sections will cast a lighter line. Erik Ostrander prefers the Nissin for the more gradual transition from softer tip sections to stiffer mid and butt sections. Either would give you the length and capability that you will not find with other rods sold in the US. 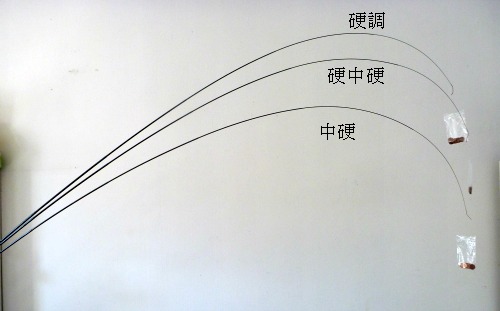 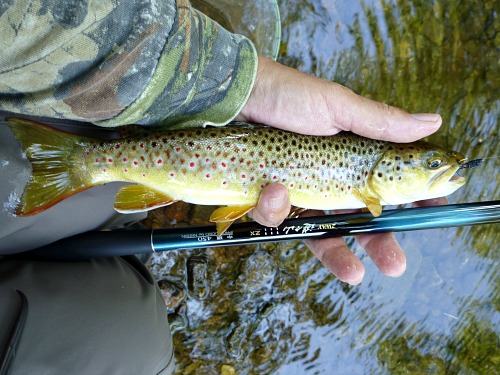 The softest of the Nissin 2-Way 450ZX rods, the 中硬, is a very nice rod for modest sized fish. I have been told that I always underestimate the capability of the rods I sell. I don't know how large a fish you could catch with it, but I certainly wouldn't describe it as a big fish rod.

The first time I took it out, it really struck me as a rod for those people who are looking for one that's not too stiff, not too soft, and longer than the 12 footer they have now. The zoom capability is just a plus.

The more I think about it, though, the better way to look at this rod is not to think it of it as a longer Iwana. Think of it as a lighter, less expensive Ito. I now know of a couple people who have replaced a tip heavy Ito with a Nissin 2Way 450ZX soft. 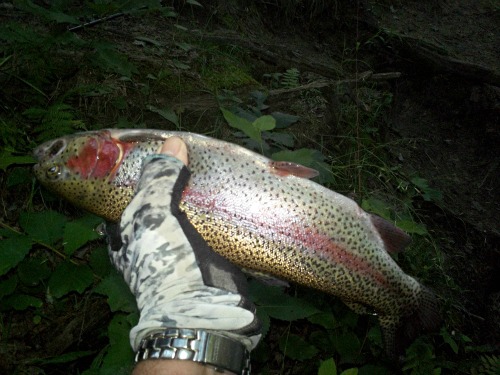 Where I fish, I don't catch a lot of big fish, so I really have not explored the limits of the medium rod, the 硬中硬. The photo above, sent to me by Brad C, is a nice fish but I don't think it's the limit. The limit, as Coach would say, is what can you catch with 6X tippet?

The medium Nissin 2-Way 450ZX reminds me a bit of the Amago, and as such, I suspect it will be a very capable rod for trout in the 16-20" category, and probably any bass you're ever going to hook. However, it is a trout rod, it's not a rod for salmon or steelhead!

The rod measures 30.5 pennies at both lengths, virtually identical to the Amago, yet it weighs less and zooms to 4.5m. Can you spell versatility? 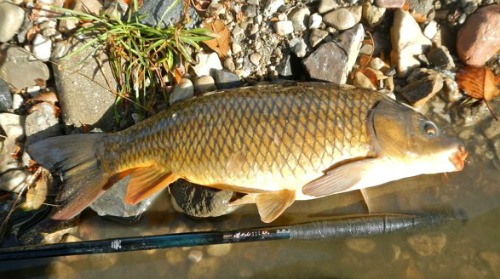 I sent one of the Nissin 2-Way 450ZX stiff rods out to Erik Ostrander to put through its paces and explore its limits (he catches bigger fish than I do). The rod stands up to carp - which is a lot to say for a fixed line rod. I am sure it would stand up to large trout and large bass as well.  If you have been looking for a big water, big fish rod (particularly one that is pretty easy on the wallet) this may be what you have been looking for. 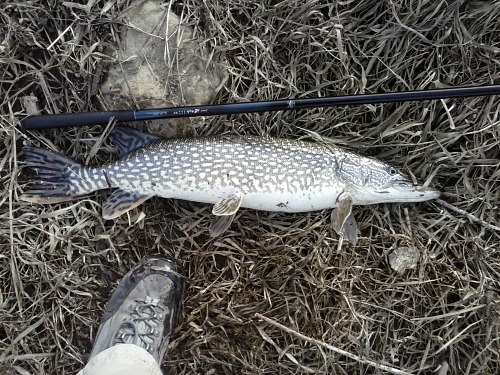 The Nissin 2-Way 540ZX is getting into the range of big water rods and also into an effective length for keiryu fishing.

I have had the 540ZX in soft, medium and stiff. Of the three, the soft is the lightest and thus the most pleasant to fish with. The 19-20 penny rating is right in line with the various "honryu" tenkara rods, but the longer length of the 540ZX makes it more effective for larger streams. 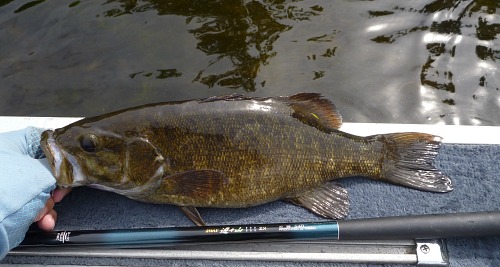 Some people may feel that the 6.5X tippet recommendation is too much of a limitation. That's roughly 3 pound test. Most of the fish most anglers catch are less than three pounds. The smallmouth above was caught with a 540ZX soft. It probably wasn't three pounds, but but it was big enough to put up quite a fight.

For keiryu fishing anywhere you have room for a 5.4m rod but do not expect fish over 15-16" this is a light, fun rod to fish with. I like it a lot and the price can't be beat.

The 540ZX medium is a very nice compromise. It would be a very good intro rod for people who want to try keiryu fishing (or two handed, long rod tenkara) but don't want to invest the amount it would take to get one of the nicer and lighter Suntech rods. The penny rating is 30-31, equal to the Amago, which Tenkara USA considers to be their big fish rod. The substantially longer length of the 540ZX will give you better drifts and protect lighter tippets. The maximum recommended tippet is 6X.

The Nissin 2-Way 450ZX rods are keiryu rods, and as such do not have cork grips. What they do have is a very effective non-skid finish applied right to the blank. The blanks are wide enough that you will not need to add tennis grip wrap unless you have very large hands or unless you fish in the winter without gloves. The photo below shows the 450ZX (stiff) grip compared to the grip on the Shimano LLS33NB tenkara rod.

Different companies use different methods to make sure a 2-Way or zoom rod doesn't rattle when not fully extended. Nissin uses a combination of a slightly wider spot on the zooming section (section 10 on the 450ZX or section 8 on the 380ZX) to engage the end of the grip section.  A male plug on the grip screw cap engages the other end of the zooming section. It works very effectively to hold the section securely when the rod is not fully extended. When the rod is fully extended, all the sections are held in place by friction, the same as with a rod that doesn't zoom.

When the 450ZX is at its 4.0m length, there is about 2 5/8" of section 10 showing. Extend that section to bring the rod to its full 4.5m length. For the 380ZX, there is only about an inch showing, but it is sufficient to pull on the zooming section to extend it.

I have found that it is easier to either engage or disengage the zooming section from its collapsed position if you twist it slightly as you pull or push. I would caution, though, that you should twist in a clockwise direction. If you twist counter clockwise, it can loosen the grip screw cap. Be sure to check the grip screw cap to see that it is tightly screwed in each time you extend the rod. 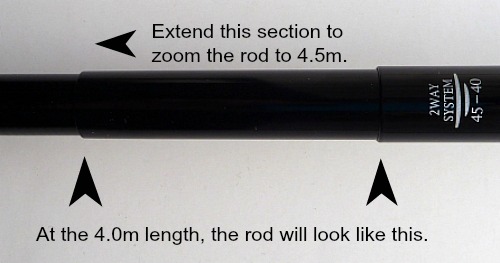 As with many Nissin rods, the tip plug is rubber, with aggressive knurling and even more aggressive fluting. The fluting holds it in place extremely securely - much more so than with most tenkara rod tip plugs. 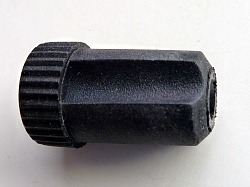 It is not going to fall out by itself. The fluting also allows you to keep your line attached when you collapse the rod. When you remove the tip plug, pull it straight out, not out and to the side. Sometimes the rod tip comes out with it.

You will want to use the round Tenkara Line Holders with the 450ZX or 380ZX rods, as the EZ Keeper "O" rings will not fit around the blank.

I no longer stock the Nissin 2-Way ZX rods. The Suntech keiryu rods are just so much better.

If you do want one, I can order one for you, though. 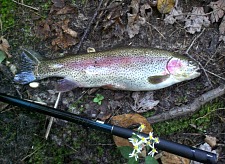 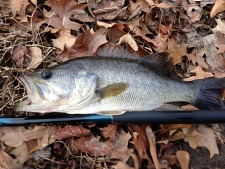