My Maine vacation this year was not what I had expected. Most of the time, the wind blew like crazy. Most of the time when it wasn't blowing it was raining. It turned out to be a spin fishing vacation rather than a tenkara vacation.

This will be a fairly quick and dirty trip report, partially because the trip didn't turn out to be a tenkara trip but mostly because I'm still behind on my shipments, and I think that should take precedent.

I did get in a little tenkara fishing and the Keeper Kebari again proved to be an outstanding smallmouth bass fly. 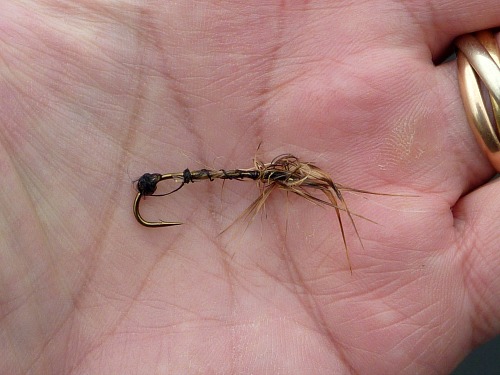 If anyone ever wonders when to change a fly, the easy answer is "when it stops working." And when does it stop working? When there's nothing left.

The above Keeper Kebari (used to be) is one of my early ones, tied before I realized the fly needed a copper wire rib. Bass do not have large teeth, but after lots of fish, a yarn-bodied fly will be reduced to little more than hackle. That fly still caught fish, though. The photo was taken after the "many many-eth" fish (and just before the next one). 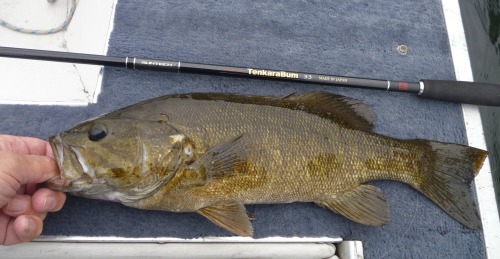 One good thing about a week's vacation is you have time to try new things. As most of you know, I am a big proponent of the "Long Rod, Short Line" approach to tenkara fishing. I am convinced that it produces better drifts and better drifts produce more strikes. On a lake, though, "better drifts" is a meaningless concept.

I practiced fishing with a line much longer than the rod, and found it to work pretty well. I still will not use it in situations where I need to keep the line off the water and am not skating or pulsing the fly while fishing downstream, but I do agree with its supporters that fishing a long line (and the resulting hand-lining) is worth practicing.

With the long line, I was able to fish a rod considerably shorter than I would normally use on a lake, and found the TenkaraBum 33 to be a pretty good bass rod. The firmer midsection (relative to the TenkaraBum 36 and  40) gives a bit better control over the fish.

Because of the almost incessant wind, I fished mostly with a spinning rod, and got a chance to fish quite a bit with the Shimano Trout One NS S53UL. It is not as fancy as the Tenryu rods, but I like it quite a bit better than the Daiwa spinning rods. It is a slightly faster rod than the Daiwas, with a softer, more responsive tip but still plenty of muscle to handle good sized fish. Unfortunately, it only comes in a two-piece rod, which is less convenient if you are backpacking or if you carry more than one rod when stream fishing. In a boat, though, that is no disadvantage.

I have a friend who is considering starting a guiding business aimed at spin fishermen rather than fly fishermen. I think the Shimano Trout One NS S53UL would be an excellent choice for his business. Clients will recognize that it is a nicer, higher quality rod and better suited to stream fishing for trout than the rod they have now (assuming they don't have a Tenryu, of course, but the Shimano is much more affordable for a beginning guide business than the Tenryu). It also fits in the Long Rod Case, so a bunch of rods in the back of a truck will still be protected. 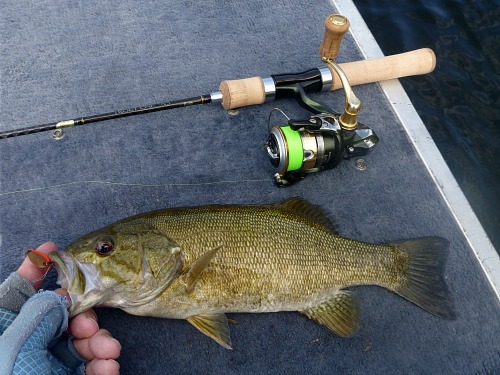 Before this trip I hadn't spent much time fishing with the Daiwa Lupin spoons. They're not much bigger than the Vega spoons, but at 1.2 or 1.8 grams, they are much too heavy for a tenkara rod. For an ultralight spinning rod, though, they work extremely well. They cast well but they are small enough that they'll draw strikes from smaller fish, which often won't hit a large lure, and also for heavily pressured fish, which also often won't hit a large lure. I haven't yet caught any 6 inch brookies with them, but that's only a matter of time. 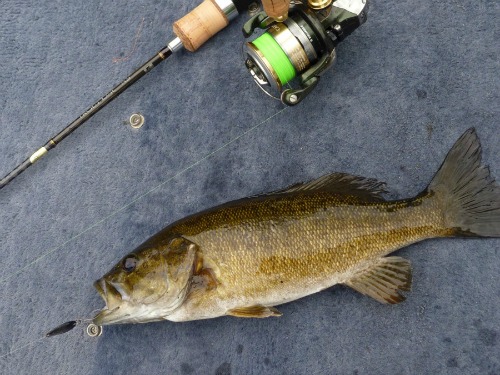 Although I have mostly fished with gold, silver or red and gold spoons - other than the Nightmare, of course (black with orange spots), I found that darker spoons tended to work better than the bright shiny ones on this trip.

I also found (after several days of fishing) that my retrieves were generally too fast. The fish very definitely preferred a slow to very slow retrieve. I heard this past week from a spoon fishing friend in Colorado that the trout in high mountain lakes also preferred a very slow retrieve. When retrieved slowly, spoons just barely wobble back and forth, and do not spin at all. Thus, you do get fish but you don't get line twist! 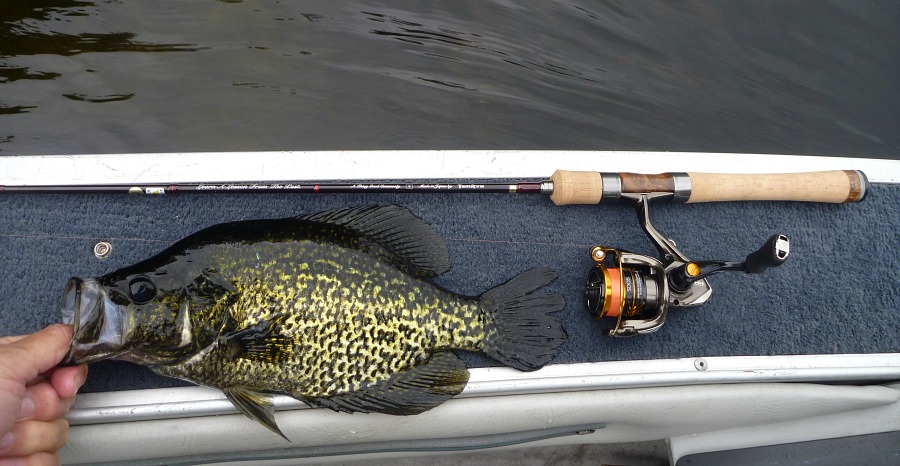 I also got a bit more time to fish the Tenryu Rayz Alter RZA61L-T. The rod is designed for fishing in lakes, where you don't have to fight the current as well as the fish. Although designed with trout in mind, I found that it makes a wonderful crappie rod! It is able to cast very small lures and protect very light lines, and is not so stiff that it would rip hooks out of a papermouth's mouth. I did catch some bass with it as well, but I think it is better suited to crappies (and trout, of course!).