Jintan Marker beads are placed on the line below the float. They are much more sensitive than the float itself in showing when a fish takes the bait and swims to the side rather than down. If your bait is near the bottom, that is the most likely case. The primary purpose of a tanago float is to keep the bait just off the bottom and to suspend the markers so you can see them. A sideways movement of the markers is what indicates the bite.

If you watch Japanese tanago fishing videos on YouTube (cut and paste タナゴ釣り as a search term) you will see that the angler often reacts when his float has not even twitched. In some of the videos, you can see the markers move slightly to one side, which is a sure indication that a fish has taken the bait. 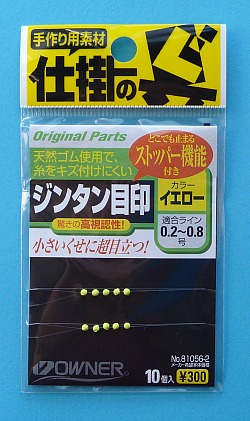 The Jintan Marker beads package has two sets of five markers. The markers come on a loop of line, which makes it easy to transfer them onto your line. However, before doing anything with the markers,  first insert your line through the short piece of rubber tubing that holds the float in place. The float has to go on first (or you will have to cut your line and then tie it back together after putting on the float). Similarly, you have to put on the Jintan Markers before you add the Dinsmore shot or the Owner tippet connector.

Insert the end of your line through the loop that the markers are on, pulling at least a few inches line through also. Then one by one, slide the five beads from the line they are on over onto your line, far enough so they are beyond the end of your line. You will be able to slide them up or down the line. When you adjust the float for the depth you want to fish, move the markers so they are near enough to the surface that you can see them.

Understand that tanago fishing in Japan is close-in fishing, generally with a very short rod and while seated in an elevated position relative to the water's surface. If you use a long rod and fish with your float fairly far away, you may not be able to see the markers because of glare on the surface. If you can't see them clearly enough to detect a minor sideways movement, they won't help you.