The Indicator Kebari is a basically a strike indicator with a hook in it. Fished with a long rod and short, tight line, you keep it at the surface by line manipulation. It is a visible, sensitive indicator that will also draw strikes - which will not happen with multicolored line tips (and which will happen - to no avail - with standard floating strike indicators).

I have mostly relied on watching a high visibility line. Although I have played around with adding short sections of different colored line to the end of my standard fluorescent orange Hi-Vis fluorocarbon level line,  I soon decided it wasn't worth the effort for me to make them and they certainly wouldn't be worth what I would have to charge for my time if I sold them. The Hi-Vis orange by itself is plenty visible enough, and without having to price in the labor to cut sections and tie knots it is pretty inexpensive.

The idea for this fly comes from wanting to have a more visible indication of strikes when fishing horsehair lines (although you could certainly use it with any line). Horsehair isn't that hard to see in most light, as it is kind of a milky white and does show up well against most backgrounds. It's not Hi-Vis orange, though. (And painting horsehair with Sharpies - which I've done - doesn't help that much and somehow just seems wrong). 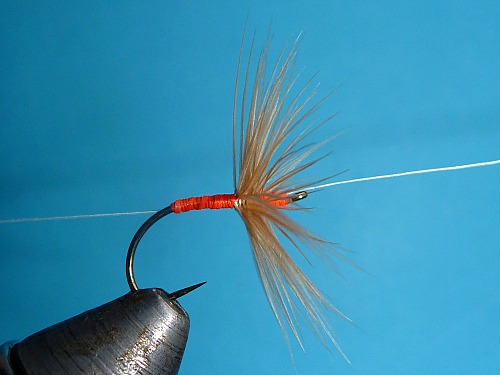 The photo shows a sakasa kebari tied with a strand of horsehair laid along the hook shank and the thread and hackle wound around the hair. The hair extends just a few inches beyond the right side of the photo, just enough to be able to tie it to the line (which would be tapered down to two hairs at that point). Most of the hair, about two feet, extends past the left side of the photo. A point fly would be tied to (or around) the end of it.

The fly itself is tied with Fire Orange Uni-Thread and is heavily hackled with a light brown hen hackle - both for added visibility. I found that the Hen & Hound sakasa kebari, which is more sparsely tied with the same hackle and Pearsall's Hot Orange silk thread, is quite visible even when a bit under the surface. Substituting the fluorescent Fire Orange for the Hot Orange and tying a heavier hackle will make it even more visible. Also, manipulating the line and fly to keep the fly in the film will keep it visible as well. I think it will be easier than trying to keep a floating fly floating. I don't object to floatant, it's just simpler to fish a fly that doesn't require it.

You could also tie them with Chartreuse Uni-Thread and partridge breast hackle. (And if my Chartreuse thread starts flying off the shelves, I'll stock Fire Orange as well).

The same basic idea will work for those anglers who prefer mono or fluorocarbon tippets and will be even easier. In that case, a short loop of mono is tied in just the way you would create the eye loop for an eyeless hook, but the loop is out the back, providing a convenient way to tie your tippet down to the point fly. 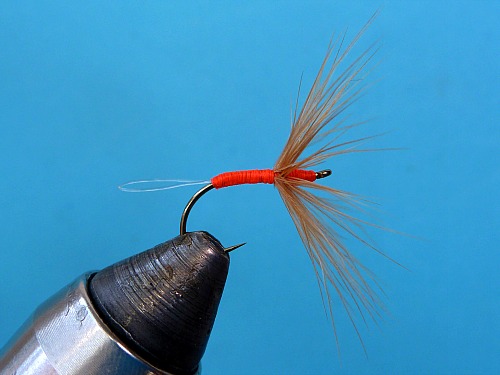 I'm sure that right about now, many anglers are going to think all this is unnecessary because they just tie the point fly tippet to the bend of the top fly hook. That works fine if you fish with barbed hooks, as the barb will keep the tippet from sliding off. With barbless hooks, it isn't as secure. (Although I do not remember ever having seen this idea, I am not the first to publish it. I just found out that Normand Frechette posted the idea of a "mono dropper loop" on the Flytying: Old and New blog in September of 2011.)

Traditional tenkara anglers don't fish two flies at a time anyway, so they've never had that problem. Of course, if they wanted to fish two flies, as many do in the US, the UK, and the rest of the world, this is not a bad solution. It gives the fish two choices, it provides good strike detection, and it forces you to keep your line off the water - each of which is a good thing.

(The fly was created with trout in mind, but for bedding bluegills or bass on a summer's eve, the top fly chugging along the surface should be an absolute killer -although perhaps not on a single strand of horsehair.)