I have decided to discontinue the Fuji EZ Keepers. The biggest problem with them is that they cause kinks in a fluorocarbon line that are hard to stretch out. Attempting to stretch a line that is attached to the rod greatly increases the chance that you will break the rod tip.

Personally, I feel the Meiho Chibi Maru tenkara line holders are a much better solution.

Designed for spin fishermen to hold a lure securely, which only requires one keeper, they come only one to a pack. For tenkara line holders, two EZ Keepers or Hook Keepers are required.

Using the large "O" rings, mount the Keepers so that the one closer to the grip angles backwards when flipped up and the one towards the tip end of the grip section angles forwards when flipped up. The two smaller "o" rings are put on the rod between the two Keepers themselves. 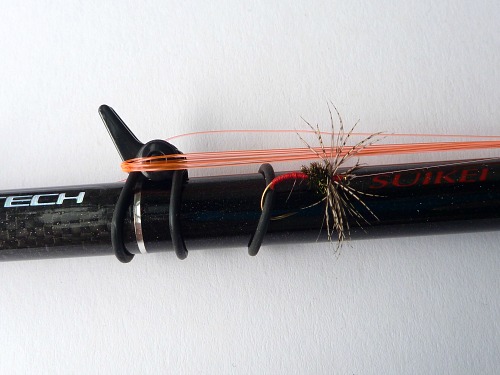 To hold your line as you move between spots, first collapse the rod, then flip up each of the keepers. Wrap the line around them in a figure 8, which is important because it will prevent the line from twisting as you wind it. Hook your fly under the nearest of the small "O" rings, moving the "O" ring to tighten the tippet. You can use the second "O" ring to hold a second fly on a dropper.

When you are ready to fish again, unwind the line and flip down the Keepers. You will have to stretch your line a bit to relax the memory, but that is a small price to pay for having no tangles and no line twist as you move from spot to spot. And don't be so concerned about getting out all the memory. When a slight coil in the line suddenly straightens out, it is a very sensitive indicator of a strike. 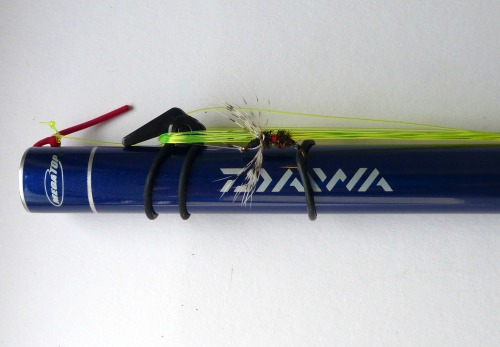 Not long after I first published the page on the Fuji EZ Keepers, people told me there was a better way to attach them. They argued, convincingly, that if the Keepers are mounted facing the other direction they will hold the line much more securely. That way, the Keepers hold the line when they are folded down, rather than in their up position. Although it has not happened to me, if they are attached as shown in the top photo on the page, it is not hard to imagine that one of the clips could get pushed into the down position accidentally, releasing the line when you don't want loose coils of line floating around. 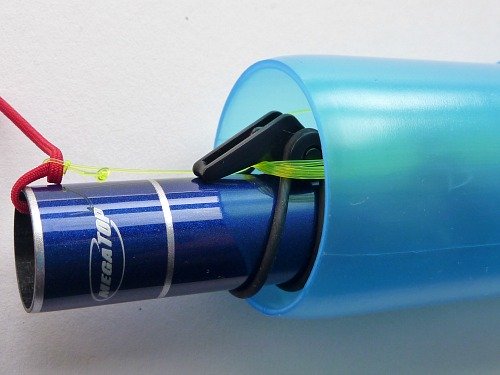 There is another significant advantage to attaching the Keepers this second way, particularly for the Daiwa Keiryu-X, Nissin Pocket Mini and Shimotsuke Kiyotaki. Those rods will fit in a Small Rod Case with the Keepers and line attached - but only when the Keepers hold the line when they are folded down. Please note: the O rings supplied with keepers will not fit around the Keiryu-X 45. I have been told you can buy larger O rings at a hardware store but I have not tried.

I must say that I prefer the Tenkara Line Holders, because they do not cause kinks in the line and  you can keep lines fully rigged independent of the rod. You can also pre-rig multi fly casts for pesca mosca Valsesiana, which you really cannot do with the Fuji Keepers.

They come in a number of colors. I took my cue from Henry Ford, when he started selling the Model T. If you order the keepers from TenkaraBum.com, you can have any color you want, as long as it's black.

Please note: Fuji Keepers will not fit on larger diameter keiryu rods with the O rings supplied in the package. I have had a number of customers tell me that with larger O rings available at any good hardware store they'll fit just fine. At some point, though, the angle at which the O ring hits the flange is too shallow for the O ring to hold. I don't know where that point is because for the larger diameter rods I've always used the Tenkara Line Holders.

WARNING: If you collapse your rod, wrap the line around Keepers, and then strap the rod to your backpack, when you walk down the trail bushes and trees WILL reach out and try to grab the line as you walk past. When (not if) one succeeds, the branch will pull the line as you take your next step. The line will pull the rod tip up above the grip section and SNAP IT OFF. You won't feel a thing until it is too late.

Either carry the rod in a a Medium or Small Rod Case (depending on the rod) or put the rod inside your backpack or carry it in your hand or remove the line from the rod tip -- or buy a new tip. Seriously. 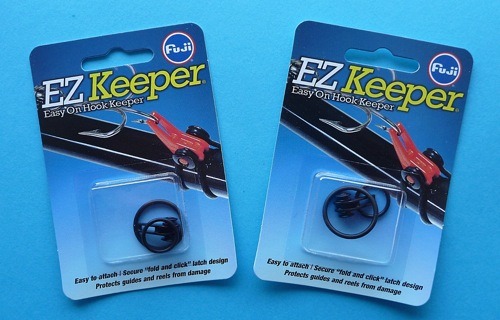 1. Do the one at the grip end first. Hold it in place with your index finger with the large O-ring over the protrusion on the far side of the rod. 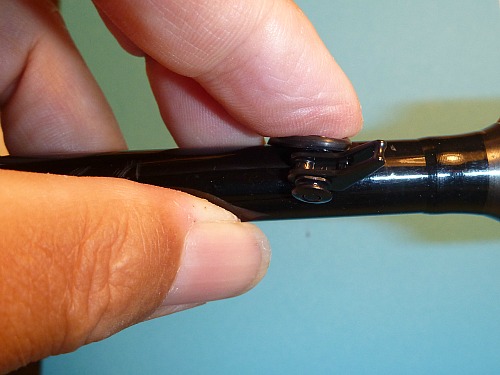 2.The bottom of the large O-ring should show below the rod. 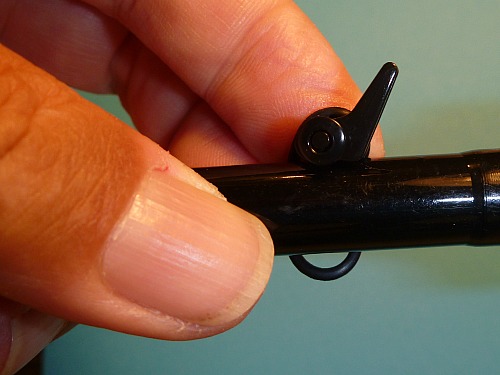 3. Grab the bottom of the O-ring with your thumb and index finger, stretch it downwards, then pull it up and over the protrusion on the near side. You have to hold the other index finger steady so the EZ Keeper stays in place. 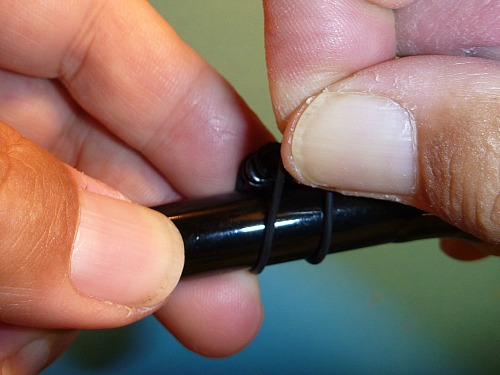 4. You then put both of the smaller O-rings onto the rod. These are for hooking your fly under after winding the line and tippet. 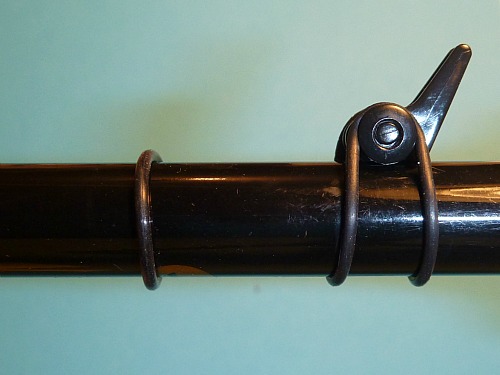 5. Then put on the other EZ Keeper the same way. Make sure both point outwards when they are in the "up" position. 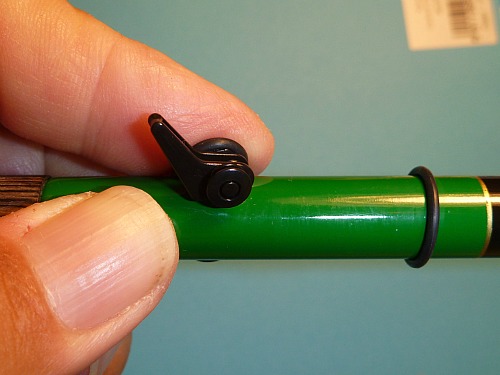 6. As an alternative to your thumb and forefinger, you can pull the O-ring up and over the near protrusion with a sturdy dubbing needle or bodkin. 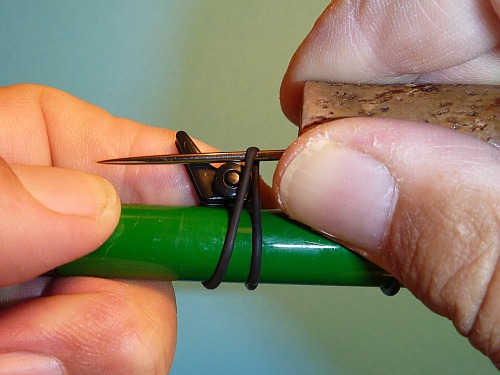