Chris and I have both mentioned float fishing and many of the posts on this site suggest that people use floats with their fixed line rods. I thought it might be useful to give some information on UK style float fishing.

Chris is right to say that in the UK we have a much greater selection of floats than is available in the States. 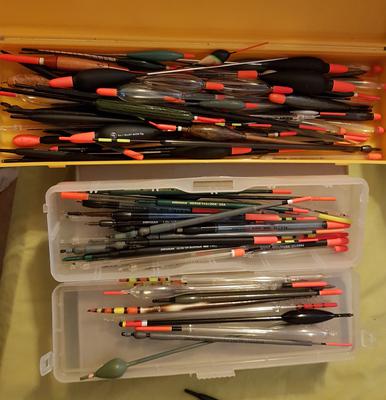 Some of the floats in my collection.

The pictures above show some of my own floats. I had a rummage through to look for suitable ones that you would have some chance to get hold of. Some Googling suggests that Drennan are prepared to ship to US tackle dealers (hint to Chris!). 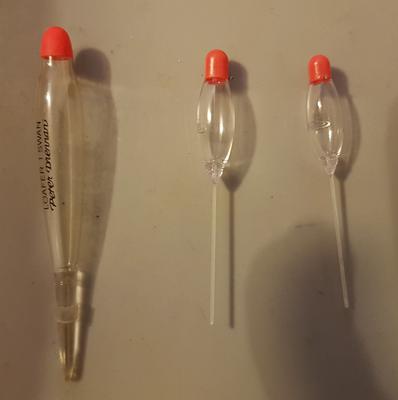 Running Water Float – I strongly recommend the Drennan Crystal Dibber. It was designed and is sold as a still water carp float but the first time I saw one I noticed how similar its shape was to a Loafer float (in the same image) which is one of my favourite floats for fishing fast water. I have used them a lot for fixed line fishing in rivers and they are superb. They come in 0.2, 0.3 and 0.4g sizes. Very stable and buoyant but sensitive enough for good bite indication from even the smallest fish. 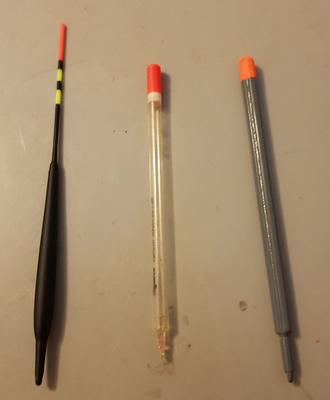 Still Water Float - Given the short ranges a fixed line rod will fish you would be hard pressed to come up with a better still water float than the Drennan Glowtip Antenna size 1 (3 #4, which means it takes three #4 shot to set properly). Extremely sensitive and the hollow tip makes them glow in the sunlight so they are very visible.

Universal - If I was limited to one type of float for all fishing it would be a straight waggler. Extremely versatile, they will work well on any type of water. You may be able to find a size 1 crystal waggler from Drennan which is also 3 #4 shot so should be light enough for almost any rod.

For more information on these floats and a wide range of coarse fishing tackle go to the Drennan International website. There are a great many manufacturers and artisan float makers in the UK and Europe. I have focused on the Drennan range as they should be a little easier to get in the US.

There are a huge number of float rigs that are used in the UK so this will be quite long but still barely scratch the surface.

I will assume that we are working with the Top floats. If anyone gets hold of the others I have mentioned, leave a question on the Contact Us page and I will happily explain how to rig them.

Still water rigging involves attaching the float bottom end only. You could attach them as designed but if you can fit an eye of some sort they should work a little better. I would either whip a piece of wire over the bottom of the stem or try to wedge a swivel into the rubber fitting. The reason for attaching the float with an eye is so that you can fix the depth by trapping the float between two shots with a small gap (say ½”) between them. This enables the float to spin around or fold against the line. These are good things. It will reduce potential tangles and avoid impeding your strike as well as making it less likely that you lose your float if a larger fish plows through reed or weeds.

The shots trapping the float should generally be at least 2/3 of the float’s total loading. Divide the rest into smaller shots. Assuming that the float takes 3 #6 shot to dot down to the very tip you would use 2 to trap the float at the correct depth and 4 #10 shot (each of which weighs just barely more than half as much as a #6 shot) to make up the rest of the loading. Put a shot around 8” from the hook, another 12” above that and so on increasing the spacing as you get closer to the float. If you run out of depth for your shots put the left overs next to the shot trapping the float – it is fine to put them on both sides.

This would be your starting set up. As you work through your fishing session, if you find that fish won’t take then move the bottom shot further away from the hook, if you find that fish are taking your bait without giving an indication then move it closer. If you are trying to catch larger fish at depth and your bait is being intercepted by small fish close to the surface then move some of your shots together at say half depth so that the bait falls through the surface layers faster.

There are two reasons for spacing the shots as described. First by increasing the distance between them as you move up towards the float you will reduce any tendency for them to tangle. Second the spacing enables a slower and more natural fall of your bait through the water column. You want this as it will enable you to get, and spot, bites as the bait sinks (known as fishing on the drop). Each time you cast you will notice the float sits upright as it lands then, as the falling shot start to hang underneath it, the float will gradually settle to its final level. If you get used to the timing of this you will be able to see when a fish intercepts the bait as the float will not settle at its normal pace.

For running water you would need to attach the float at the top as well as the bottom. The way to do this is with a small section of silicon tube. I’m not sure if Chris has anything suitable but Fish USA has float rubbers and lengths of uncut tubing on their site. Slide the band onto your line before the rubber at the bottom of the float. Next simply slide the band over the tip of the float before plugging it in to its bottom attachment so that it is held in line with your rig.

The reason you want to set the float up this way is that it will reduce the floats tendency to register false bites when the bait drags on the bottom and enable you to hold it back in the current without being pulled under by the flow. That is important as it will let you fish your rig with the bait moving at the speed of the current at the bottom of the river rather than the faster water on top. It also lets you overcome the effects of a downstream wind.

Shotting a running water float is a little different to a still water rig. If the river is relatively smooth and slow flowing then the best method is to space the shot evenly along the line in a similar way to the dropper shots on a still water rig. So with our 3 #6 float you might use size 8 shot and space 6 along the line starting around 10 inches from the hook this is known as “shirt button” shotting. If you could be bothered it would be worth replacing the bottom shot with 2 no 10s. As a general principal, a float rig will fish better with more small shot rather than fewer large ones.

For faster, more turbulent or shallower water you are best off placing all the shots 12 – 18” above the hook with perhaps a smaller shot half way between this bulk and the hook. This will ensure that your bait reaches fishing depth before you run out of drift (trot in the UK). As with stillwater fishing you can manipulate the position of the shot to either make the bait move more naturally or bites show more positively.

I have mentioned fishing on the bottom, but how do you know when you are there? Still waters are straightforward and you can be very precise. Before fully weighting your float, squeeze a large shot onto your hook so that the weight is enough to sink it. Cast out to your fishing spot. If the float sits proud (too high) or lies flat, you have set up too deep. If it sinks then you are too shallow. When it sits as it should when fully shotted you have set up at dead depth. You may want to mark this on your rod so you can find it again after changing anything later.

Since the rig, I have described will fish at all depths as it sinks, I like to start a couple of inches over depth. Then pay attention to when most bites come. This will enable you to adjust the rig to the depth the fish are feeding or continue to fish the entire water column from just under the surface to the bottom.

On a river I find the most practical approach is to start a couple of feet deep and increase depth each cast until I start catching – either fish or the bottom. If you want to fish the bottom of the river set the depth so that your rig catches on the drift and then hold back hard as your float comes up to obstructions and the bait will rise so the rig can pass over them.