If Fishy Fullum ever invites you to fish with him, take him up on it. Don't do what I did and say OK, but not follow though for a year. Do it. Set a date and go. Fishy is one of those guys who knows everyone and who everyone knows - and everyone likes. He's been around long enough to know a lot but he doesn't have the air of someone who knows it all. If you fish with Fishy, you can learn a lot, but you can be sure he will try to learn something from you as well. 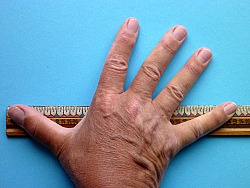 I was fortunate enough to fish with him on a 100 acre pond in upstate New York on Friday and Saturday of last week. He said there were nice bluegills - nine inch bluegills, which for this far north is a mighty nice bluegill. (Nine inches is almost exactly my handspan from tip of thumb to tip of pinky.)

What he didn't say is there are also bass, crappies, pumpkinseed, pumpkinseed/bluegill hybrids, pickerel, golden shiners, an otter, a bald eagle... The beavers weren't in residence this year. It seems they eat all the trees they like and move on. When the trees return, so do they.

That type of time scale - when the trees return - is evident when you talk to Fishy about the pond. He has been managing it as a fishery for the better part of 30 years now. I asked him how you "manage" a pond. In a nutshell, it's largely getting the predator/prey relationship in balance. A pond that is full of 3 and 4 inch sunnies, so common all across America, is out of balance. Not enough predators - or at least, not the right predators. That's a pond where the dominant predator - homo (not always) sapiens - takes the big bass. In Fishy's pond, the dominant predators are the big bass (and the big pickerel). 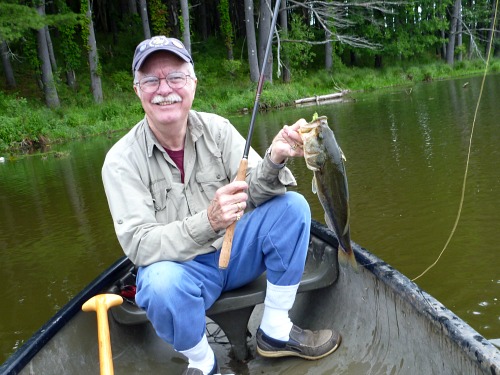 Fishy with a bass (not one of the big ones)

Managing the homo (not always) sapiens can be a problem. We spoke quite a bit about crappies. I almost never catch any crappies, other than a few very modest ones in Central Park. 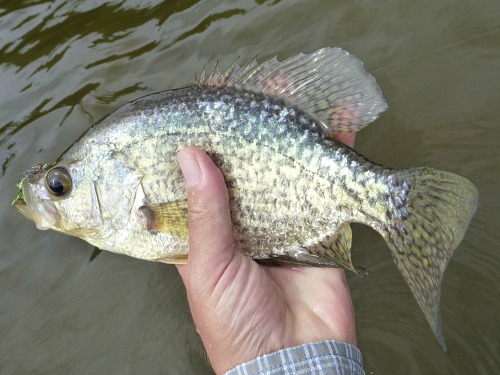 Fishy was adamant that to maintain a good crappie resource, you cannot take home big stringers of big female crappies. I asked him how do you tell the females. His answer basically boiled down to they are the big ones. I am sure on the large Southern impoundments, you can take a lot of crappies. On a relatively small pond, you can't. One of the guys who used to have permission to fish the pond insisted on taking home stringers of crappies. He no longer has permission.

Other than limiting the killing of mature bass and crappies, and keeping a strict no-kill policy on pickerel, Fishy also early on stocked the pond with golden shiners as forage fish for the bass and pickerel. 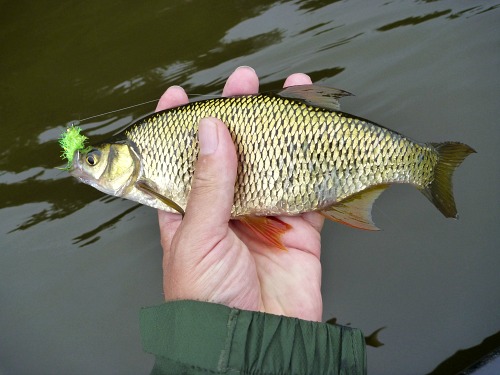 I have to say that I like catching golden shiners. They fight well. They jump. They're pretty. So many people just see them as bait and are disappointed when the tug on the line ends up being a shiner (or a fallfish or a mountain whitefish). I just can't understand that attitude. They enjoyed the the tug right up until they knew what was doing the tugging. 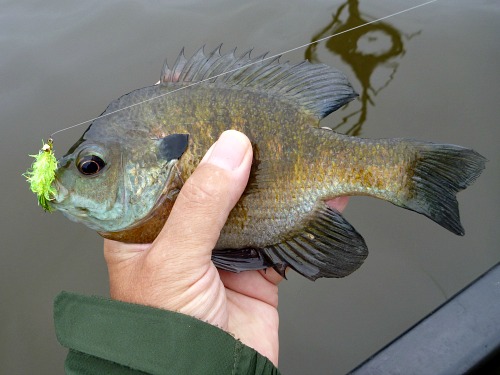 That green thing is one of Fishy's flies. I had a full complement of Killer Buggers and Keeper Kebari and Ishigaki Kebari and All Kinds of Other Kebari. I finally got to the point where I somewhat sheepishly asked him for one of his "silly green things."  Then I had to ask him again, nicely, and not call it a silly green thing. They do catch fish, though. 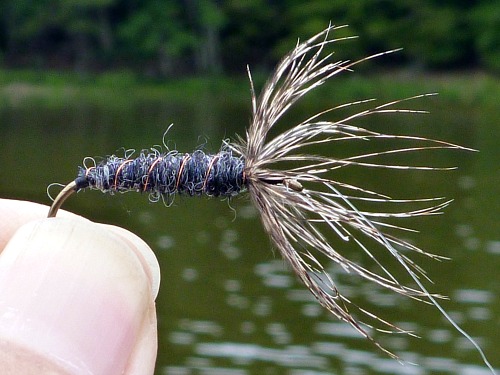 On the second day, after I'd lost all the flies Fishy had given me (there's a lot of timber in the water) I went back to my keeper kebari. 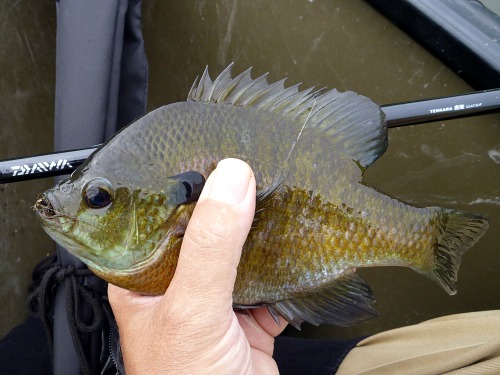 They caught fish, too. Somehow there was a change from one day to the next. On Friday, the Keeper Kebari didn't work. On Saturday they worked like a champ. 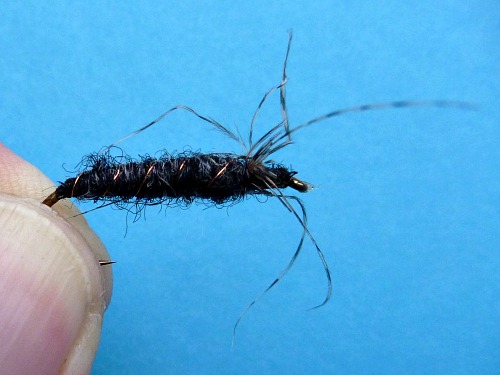 This is the "after" of the "before and after." It was still catching fish when it was time to go, and if anything it looks more like a real bug now. 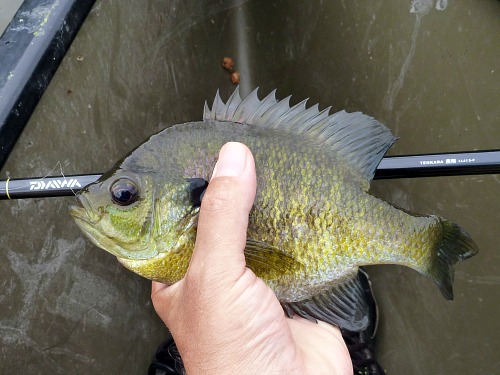 We caught a lot of fish. Both days were "many" days. Much more important that that, though, was spending some time with Fishy and his lovely wife, and getting to spend some time with him on the water. I'm absolutely certain I learned a lot more from Fishy than Fishy learned from me.

There is one thing you'll learn when fishing with Fishy, though. It isn't about the fish. 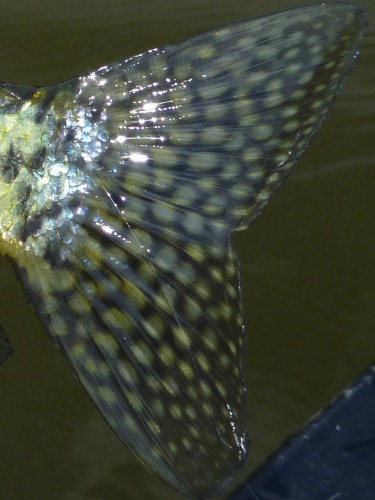 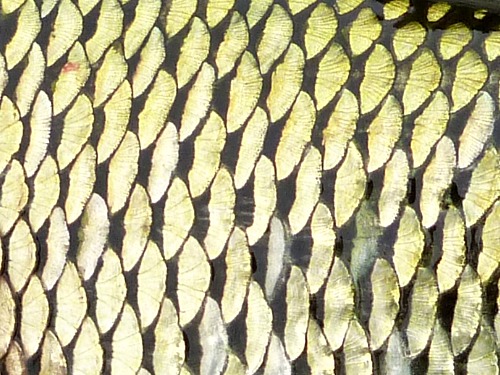 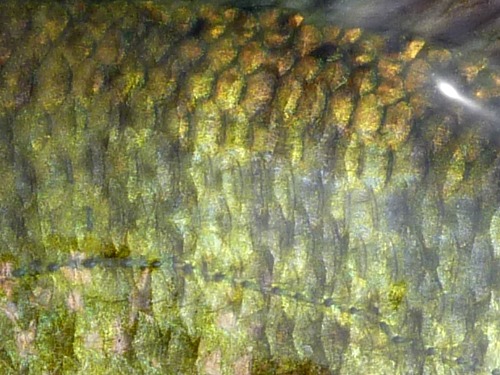