I've been going to Isla Mujeres, an island off the Yucatan coast for twenty years. Last year I brought two small rods and a fly box - I caught two fish in the rocks and tide pools. This year I included some bait and caught about twenty fish and nine different species. This is what I've learned so far.

I concentrated my fishing on a group of rocks right at the water's edge. The waves washed around them and sometimes over the top. There were dished out tide pools ranging in size from a kitchen sink to a hot tub. They had sandy bottoms, crystal clear water and little fish. It really is like microfishing in an aquarium. 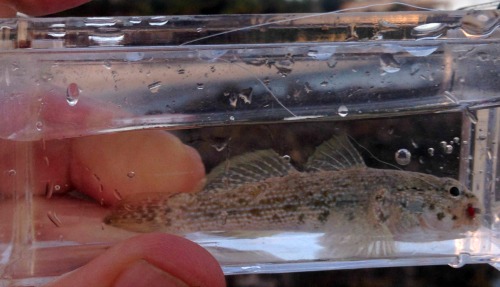 I used size 26 and 32 flies to go after individual fish. My first fish was a Bridled Goby on a size 32 Utah Killer Bug (UKB). Gobies are most active at sunup and will aggressively attack anything that moves and looks vaguely like food. They hang out in the rocks but will come out to follow a fly. They are the only fish I consistently caught without bait being involved. 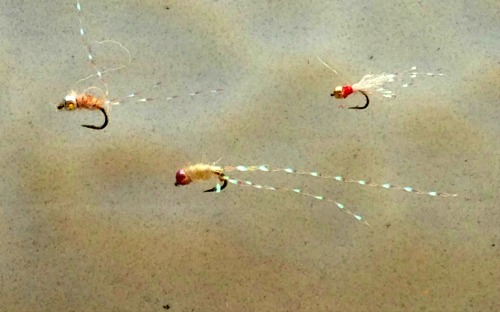 My other tide pool catches were small Sergeant Majors. I used what I call a Utah Killer Shrimp (UKS) plus a  little Power Isome sandworm artificial bait. The UKS was a size 26 bead head UKB with a small tail of clear Krystal Flash. The Sergeant Majors would chase a clean fly but would not close the deal until at least a little bait was added. 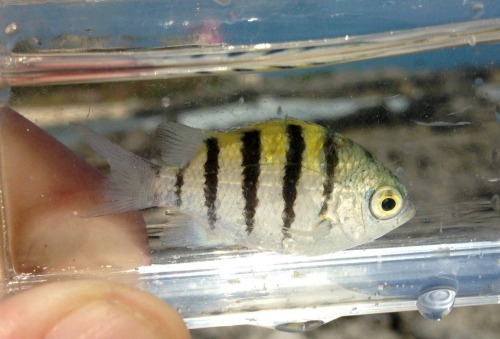 Were The Fish Are

Tide pools have micros. The rest of the fish are swimming around the rocks. Reef and rock fishing is a lot like trout fishing. The fish suspend around cover and wait for lunch to come by. Look for moving water, plunge pools and shelter rocks in the current. The swirling, turbulent water moves the fly and also obscures it and the fish may decide to take a chance. Because of the whitewater I saw few of my takes, while the incredibly clear water gave me many opportunities to see beautiful fish ignore my fly. 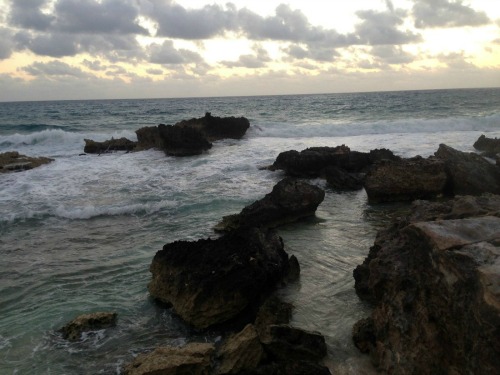 I recently came across a style of Japanese fishing called Kajika (sculpin) fishing. A short rod with a very short line is poked down into the rocks in a riffle to catch said sculpin. Thinking this might work in the reefs and pools, I picked up a 28" ice fishing rod to experiment with. I think the concept still holds promise but the ice rod was way too short. I'm 6'1" and standing with my hand comfortably at my waist I found I was going to need a rod around 42" to reach the bottom 2-3 ft. out. In addition, one stands around and above tide pools, not in them. 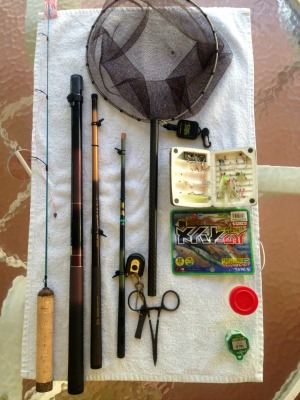 My tide pool rig ended up being a pretty standard micro set up: a Kiyotaki 18 at about 6' with six inches of red Amnesia and eight inches of 7X tippet with a #6 shot a few inches back from the hook.

When I moved to the plunge pools and channels things got strange. The trade winds were blowing a steady 30-35 mph. Even the little micro rig was whipped around the rod tip and totally tangled. I ended up with what might be called a macro-micro rig. I stayed with the Kiyotake 18, although it was a little short, with ten inches of red Amnesia and a heavy, I think #3, split shot a the end, then sixteen inches of 5X or 7X tippet with a #6 shot and a bead head fly - a very short and heavy setup.

This is not casting. I would choose a path through the white water and, in the spirit of Kajika, place the fly were it needed to go, sometimes with two feet of rod tip submerged. With all that weight, down means down with no waiting on the fly to sink. I'm sure this all sounds like a rather stone-axe approach to things, but the wind left little choice. The weight also helps stabilize the rig out of the water. It is important to keep the tippet long in relation to the sighter. A little isolation from the big shot helps with movement and presentation.

I did do some regular casting with my Soyokaze 27 rigged with No. 4 line and extra shot. I used a hard side arm cast low to the water and then let the entire line sink before towing the fly across the bottom. It was not a pretty business. If the rod tip was held up in a normal position the wind could pull the entire line and tippet off of the water.

In just a little less wind most of this could be done with a standard level line setup. Having said that, the ability to poke the lure into a tight place is very useful. 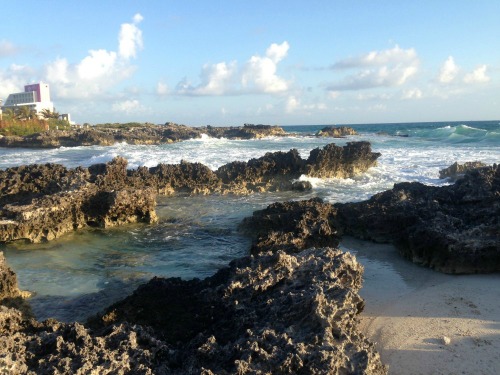 The rock pile with the pretty tide pools also had a wonderful plunge pool. Water would charge in over the rocks during big waves and then swirl around and out in two different directions. Nearby a small channel funneled water into a lagoon. A large rock at the transition from channel to flats provided cover for numerous species. These two areas were my main focus for rock/reef fishing. 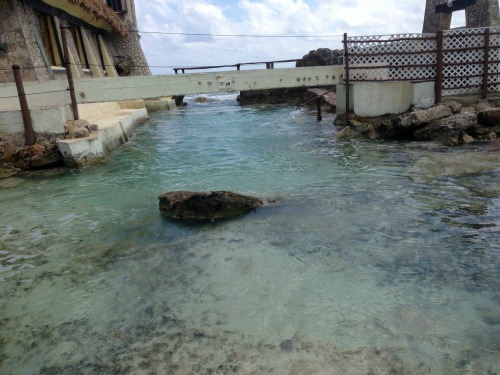 I caught the following species in the rocks: Sergeant Majors, a Night Sergeant, a Longfin (or maybe a Dusky) Damsel Fish, French Grunt, Yellowfin Mojarra, a Silver Jenny Mojarra, a Pudding Wife Wrasse (photo upper right) and last but not least, several Slippery Dick Wrasse -yes, that's it's name and I can imagine it being the foundation for a legendary middle school science project (photo upper right). 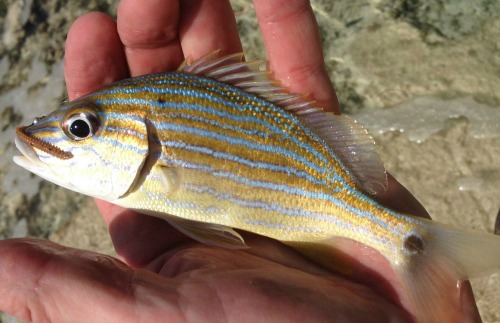 The sea is salty. You will be salty. Your gear will be salty and some of it won't like it. The chain on my nippers rusted, the hinges on the little acrylic photo tank rusted and the fresh water Killer Bugs rusted.

Most troubling, the Kiyotaki did not tolerate a layer of salt in the joints and stuck badly several times. Using short lines means the rod is being collapsed and extended continually which coats the joints inside and out. Rinse everything everyday and perhaps carry a rag or sponge that can be soaked with fresh water to give an occasional wipe down. The special Daiwa joints on the Soyokaze were much more tolerant of the salt.

Everyone who fishes knows wet rocks and moving water are dangerous. If the rock was coral a million years ago it can also be viciously sharp and jagged.

If the moving water involves the ocean it can be very unpredictable and powerful. Wear good shoes. When an unexpected wave hits you in the butt and you're stomping through the rubble hoping to remain upright, you don't want to be wearing flip flops. Also, those sturdy shoes will be full of sand which will rub skin raw over several hours. You need socks.

You will be the dorkiest person on the beach. So what, you're already standing around with a funny little rod trying to catch minnows. I wore Keen Water Shoes with thin polypropylene sock liners. The shoes worked well and the liners dried quickly. Just make sure to keep the sandy side out when gearing up the next day. If a wading staff seems like a a good idea, and it does, a broom at the market is $4. Unscrew the handle.

Gear for Next Time

I assumed I would need little stuff or very big stuff if I found open water. Instead, trout size gear was just right. The size 20, 26 and 32 Killer Shrimp will be coming back, but also 12's, 14's and 16's. My macro-micro rig will be longer at 20 to 24 rather than 18 (I will keep the 18 for the micros) and my casting rod will be longer and stiffer, probably the Kiyose 33SF. 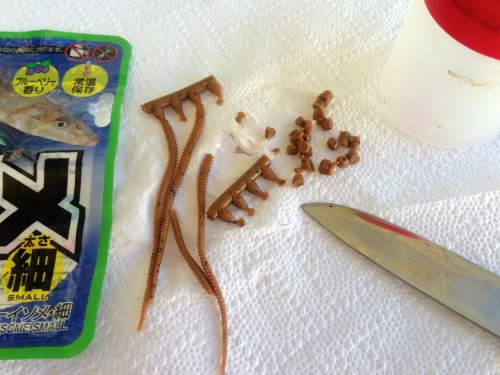 The Power Isome sandworm bait worked well and was the single biggest reason for this year's success. Having said that, shrimp are never wrong and other baits can work as well including bread (thank you Jai). I also suspect that with enough time and local knowledge, some pure flies could be found that would be successful.

An important accessory is a small container for your working bait. The Isome instructions warn against putting used and contaminated bait back in the bag. A small plastic McCormick spice jar worked well. Dr. Slick's little Spring Creek clamps worked well as a fly vice when forcing tiny bits of bait on to tiny hooks. And the TrailLite titanium net was just the right size and rust proof too.

Fly and bait worked better than just bait. A tiny piece would often do. To make it go further slice up the cylindrical runners that hold the worms together. Be frugal. You will go through a lot of bait.

I spent a lot of time over several days in two small areas. I caught some fish in a beautiful place and learned a lot but realized I only scratched the surface. The tropical saltwater environment is so rich, vast and complex it boggles the mind, but by breaking it down into small areas and carefully observing the water, basic fishing techniques will be successful. In many freshwater environments the fishing takes place within about twenty-five feet. The shore is no different. 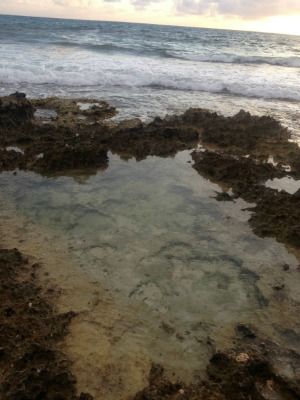 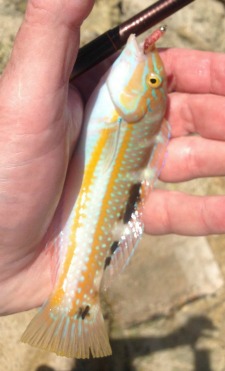 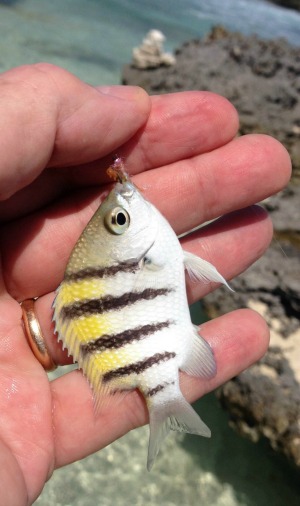