Bent pin flies will not win any prizes. They won't get you an invitation to tie at the International Fly Tying Symposium. They will catch fish, though. They're about as subversive as the Overhand Worm and are a lighthearted jab at proper fly dressers the world over (or at least the stuffier ones).

We know that tenkara flies were once tied on hooks made by small family shops whose main business was making sewing needles. You can indeed make a hook from a needle by heating it and bending it and cooling it. You can. But you can also just bend a pin and go catch fish.

I have caught fish on flies tied on bent pins for years. I have yet to have a fish get away because it straightened the pin. I'm sure a big enough fish could do it, but so far it hasn't happened.

I don't know exactly when I started tying flies on bent pins, but it's been years. This modest bass was caught on a fly tied on a bent pin. The photo is from 2010. Unfortunately, I didn't take a photo of the fly. That was back before I had a camera with a macro lens, so you wouldn't have been able to see the fly anyway. 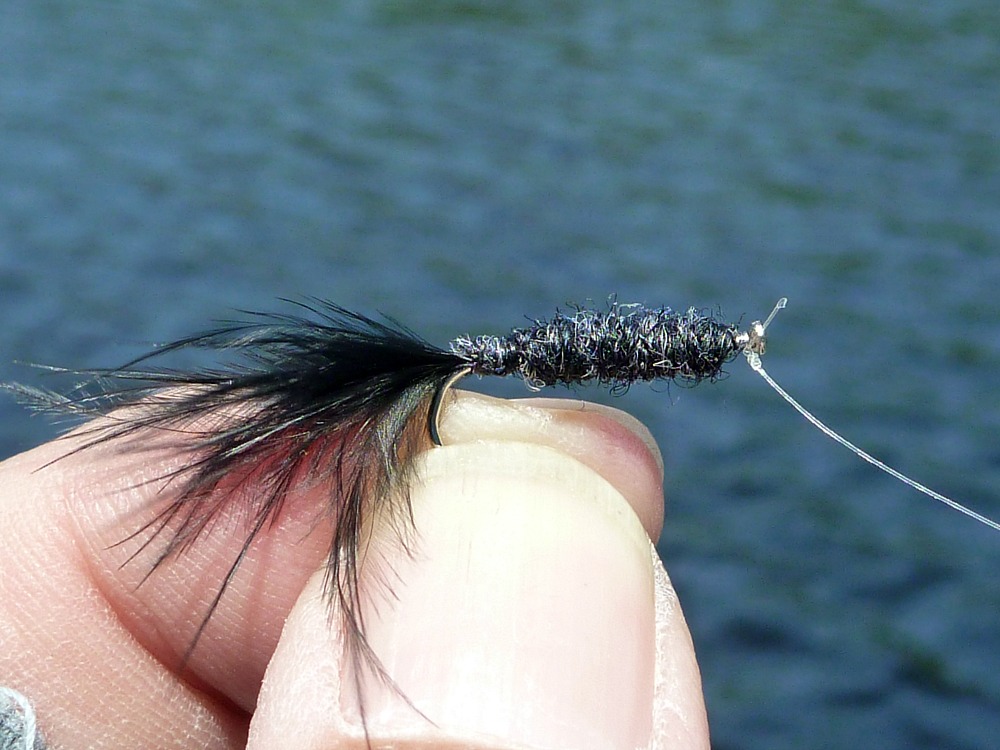 It may surprise people to learn that you can tie the tippet around the shaft of the pin and the head of the pin will keep the knot from sliding off.

Effectively, the pin head works the same way as the attachment mechanism on the Suntech Grayce II keiryu rod. Tension on the line keeps the knot tight, and the tight knot cannot slip over the larger diameter tip. 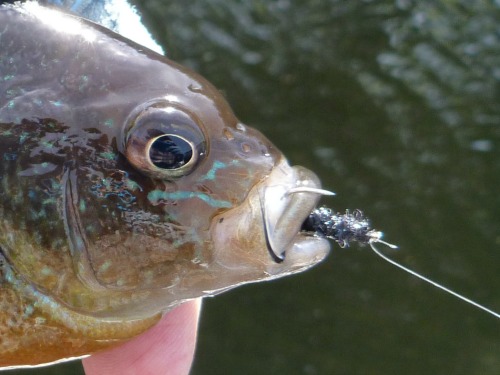 Sure, the tippet comes off at a 90 degree angle rather than in direct line with the "hook" shank, but with a light tippet it never seemed to affect the hook up ratio.

For Killer Buggers, I just bent the pin to form a hook shape, leaving the pin head to keep the fly on the tippet. That worked well for a fly that would normally be tied on long shank hook, but for a wet fly rather than a Bugger, the shank would end up being too long. 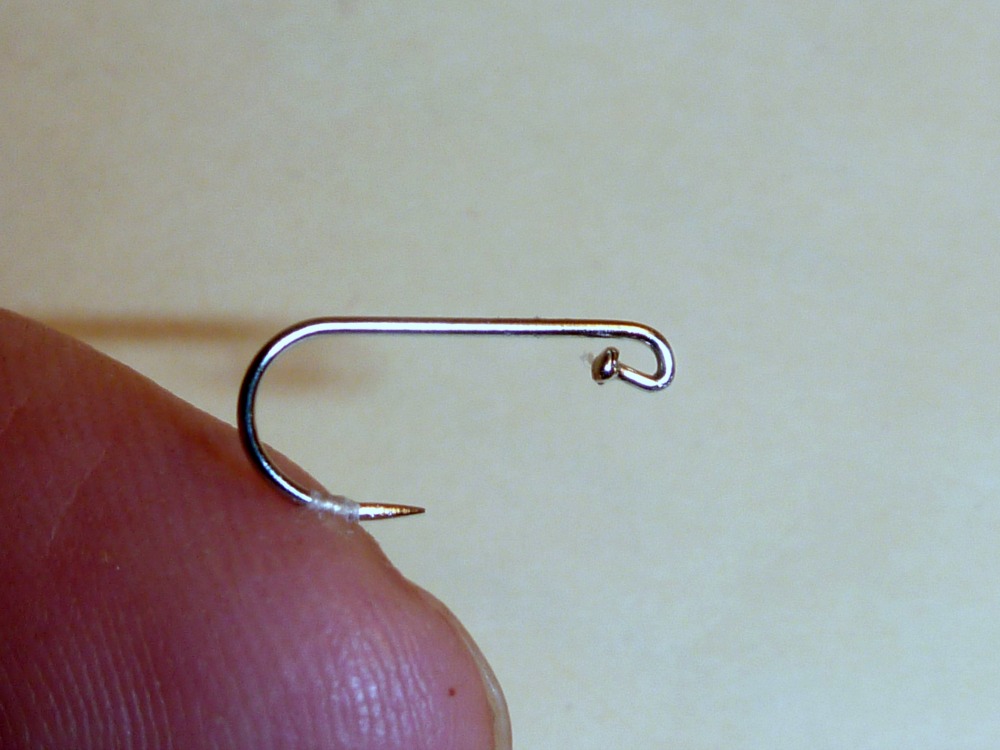 Bent pin for a wet fly

For a wet fly,  I bent the head around, which effectively produced a hook eye. 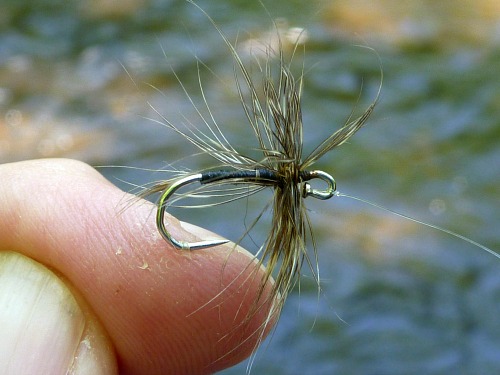 This one might win a prize - in an "ugly fly" contest

If you are going to start with a bent pin, there is absolutely no point going out of your way to tie a neat, well proportioned fly with every wrap and every hackle barb in place. As the saying goes, that would be like putting lipstick on a pig.

The fish don't care, though, and if anything I think "perfect" flies are less effective than slightly disheveled flies. 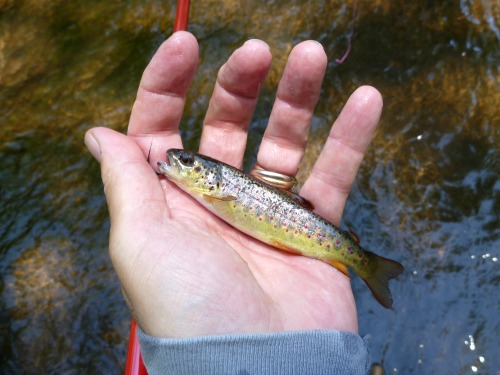 Small brown from this past weekend

It had been quite some time since I fished bent pin flies, but last week I came across a few I had tied years ago and thought I'd give them another try. The fish in the photos directly above and below were caught with that "ugly" fly. Like I said, the fish don't care. 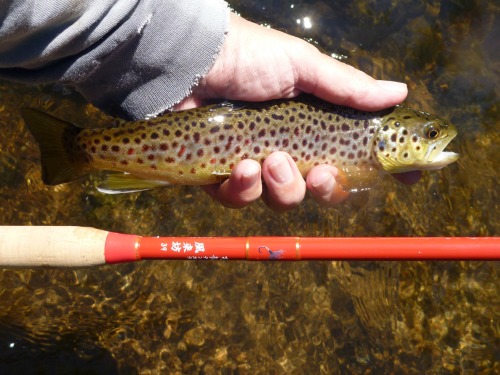 I'd have to say they worked better than I had expected. I should have expected that degree of success, though, because they are just very "buggy" flies - and anyway, presentation is more important than imitation. 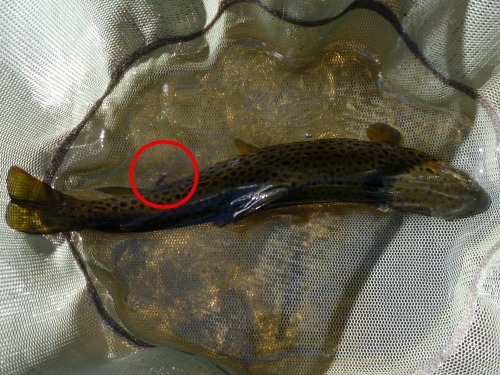 And as with all barbless flies, one of the nice things is that they often come out by themselves as soon as you get the fish in the net.

Keeping 'em wet is easy if you don't even have to unhook 'em. To be honest, with barbless flies many of the little, wriggly ones come unhooked well before you get 'em in the net.

To bend the pin I use an old pair of needle nose pliers.  Work slowly to get the bend shape and point length you want. The first one (or five) will not be quite what you had in mind, but a box of sewing pins is dirt cheap so trial and error wastes more time than money.

The bent pin is large enough that you could pretty easily tie the fly in hand (no vise). Using the Dr. Slick Spring Creek clamps would be even easier. However, I've generally used a vise. The reason is that you absolutely, positively have to sharpen the pin and that's easier to do if you mount it upside down in a vise. Coming straight out of the box, the pins are plenty sharp enough to go through cloth (which of course is their intended use) but they are nowhere near as sharp as you want a fish hook to be.

To sharpen the pins enough to fish with effectively, you will want a good diamond hook hone. If you don't already have one, somehow it just seems wrong to go buy a special piece of gear so that you can make technologically inferior items. Better to just buy fish hooks, don't you think?

Once the pin is bent and sharpened, tie any fly you like the same way you always do. Well, maybe not ANY fly. A full dress salmon fly would be just wrong. Better to tie something simple with just some thread and a feather (any old thread and any old feather). Yarn is good. Dubbing is overdoing it.

Catching a fish with a bent pin is a bit of a challenge and also a bit of a throwback to the barefoot boy with a stick and a string. There's a little Huck Finn in all of us, I guess, and from time to time he needs to come out and play. 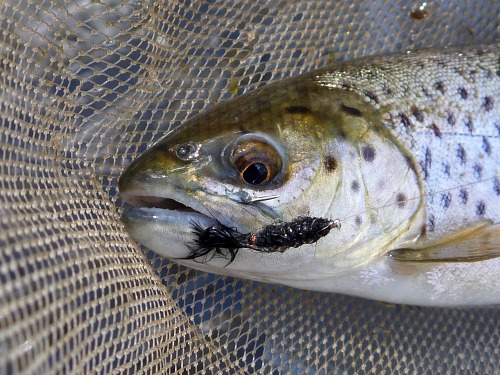