Overly aggressive hooksets break rods. I actually saw one break and was alerted to a second by the sharp "crack" sound it made as I was fishing 50 yards or so downstream. 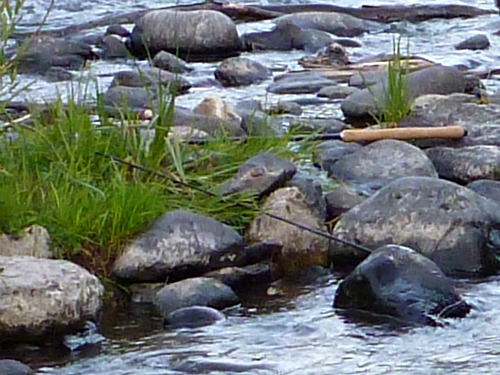 The break I saw happen (and very possibly the one I heard) was caused by an overly enthusiastic hookset on a strike. The fish was actually pretty small. It could not possibly have broken the rod on a run. I am certain that tippet size was not a factor. (The fish couldn't have broken 7X tippet even if it was in heavy current, rather than the quiet water where it was when the break occurred).

I have read of a rod breaking on a hook set on what turned out to be a submerged branch or tree root rather than a fish, and several that were broken trying to free a snag in a bush or a tree. One of my customers reported breaking three sections of a rod and getting the tip permanently stuck in the #2 section. In all those cases, I strongly suspect the break was caused by a quick, sharp, and overly forceful motion of the rod. The multiple breaks my customer reported were almost certainly caused by having the rod too low at the time she made an overly aggressive hook set on what turned out to be a rock.

I feel it is important to stress that a forceful hook set is absolutely not necessary, particularly if you are fishing a relatively tight line with all or most of your line off the water.

Consider this: from loose in a fish's mouth to firmly embedded in it's jaw, a hook has to move about half an inch. With an 11 to 15 foot rod, the amount of hand movement required to move the rod tip an inch is imperceptible. Granted, there will be some slack in even a "tight line" and the rod tip is soft enough that you need to move the rod more than a few inches to bring some backbone into play. Still you don't have to move the rod very far or very forcefully to set a relatively small, sharp hook.

I suspect many tenkara anglers are still used to much shorter fly rods, with a lot of relatively heavy, relatively thick line stuck on the water's surface, and lots of slack line in an attempt to get more than a few seconds of drag free drift. You need to move the tip of a 7 foot rod a long ways to pick up all that slack. You need to do it forcefully to overcome the friction and surface tension of the water holding the line. And you need to do it quickly before the fish spits out the hook. The result is a hook set approaching that of the bass guide who once told me "You gotta cross his eyes" when telling me how hard to set the hook.

With an eight inch trout on a small mountain stream and a 14 foot tenkara rod, you absolutely, positively do not have to "cross his eyes." Just lifting the rod should do. Quickly, yes. Forcefully, no.

Tenkara rods were designed to fish flies only a few inches under the surface and with a relatively tight line. An aggressive strike is just not necessary. Your strike need be no more forceful than picking up the fly for a new back cast. Truly, a large percentage of my fish are hooked as I pick up for a new cast.