Morgan Lyle is unquestionably the best person to put that all on paper. He was there from the beginning. Tenkara was unofficially officially introduced to the US when Tenkara USA's website went live in April 2009, but what gave it the kick that really started it was Dr. Ishigaki's tenkara presentation at the Catskill Fly Fishing Center and Museum the following month. Morgan was there, covering the event for the Daily Gazette, a newspaper in Schenectady, NY for which he wrote a weekly column on fly fishing. 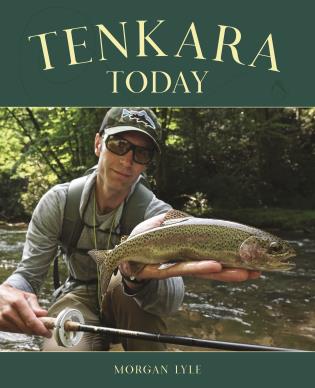 I think Morgan may still fish with a fly rod, at least occasionally, but he has been intimately involved in tenkara from that moment on. He knows all the players, and not being a competitor, he gets all of them to talk. I was there from the beginning, too, but there's a lot in Tenkara Today that I didn't know.

I pretty much knew how Tenkara USA got started, but I didn't know how the Tenkara Guides of Salt Lake City got together, and I didn't know how Tom Sadler, an early adopter and tireless advocate who at the time was on the board of the American Fly Fishing Tackle Association, got hooked. There are also segments on Karin Miller's Zen Tenkara and how Mat Sment and Mike Lutes started Badger Tenkara. (There's a bit about TenkaraBum also, but I already knew that stuff.)

For me, though, the most interesting part of the book was the chapter on Ed Van Put, author of The Beaverkill and Trout Fishing in the Catskills, and a past fisheries professional with New York State Department of Environmental Conservation. I had known that he had gotten a rod years before any of the rest of us learned about tenkara, and used it very successfully in the smaller Catskills streams (so successfully that he joked to Morgan that "they shouldn't let people fish with this"). What I didn't know was that his rod was a keiryu rod, not a tenkara rod! He fished a wet fly, but he fished it with a split shot.

Laying out where we are and how we got here, in addition to just "here's the gear and here's how to use it," Tenkara Today has a different thrust than the few other books that have been written in English. All the books are different, and all are worth reading.

If you are a complete beginner, whether a beginner to tenkara, or even a beginner to fishing, there is information in Tenkara Today that will help you on your tenkara journey. If you have been a tenkara angler for years, the sections on how we got here will have information you didn't know.

Whether Tenkara Today is your first tenkara book or your last tenkara book, if you are interested in tenkara, you're going to want this book.