With a longer, heavier butt section and a faster taper, the Long Cast will be easier to cast, and a better choice for beginners. The lighter Extra Cast version will be a bit more difficult to cast, but will be easier to hold off the water's surface. It may not be for experts only, but it is the version that experts would choose.

With an 8m length, one might think that the Sunline Tenkara Tapered Line is exclusively for honryu tenkara. However, you can cut the line down for use in mountains streams as opposed to main streams. If you do choose to shorten the line, be sure to cut from the butt end, not the tippet end.

Because the line is clear, you will not be able to watch the line for strike detection. In my limited experience fishing honryu tenkara, that would not have been a problem. As soon as the fly hit the water, I started gently pulsing the fly. After 4-5 pulses I picked up for another cast. With the short drifts and the pulses, the fly was never able to sink more than a few inches below the surface and was constantly in motion.

The strikes were not subtle.  In most cases there was no need to watch the line because the strikes were very nearly as splashy as a trout hitting a dry fly. The one strike I didn't see was because I got distracted and stopped pulsing, when I looked back at the line, it was perfectly straight when it should have been sagging. I only had to tighten the line a bit more to set the hook.

The Sunline Tenkara Tapered Line is the ultimate in stealth. If you have ever been concerned that your hi-vis line might scare the fish, this line will put your mind at ease. The fish will have a hard time seeing a clear fluorocarbon line. Of course, so will you, which makes fly manipulation critical. 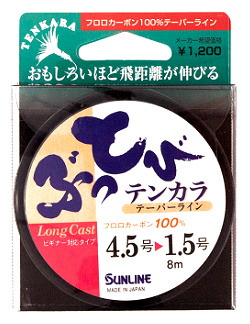 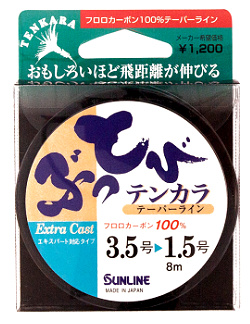