The new rods perfectly illustrate my comment that the 5:5, 6:4, 7:3, 8:2 rating system does NOT tell you how stiff a rod is, it tells you where the rod bends. People who do not understand the rating system will expect the new 8:2 rods to be extremely stiff. They're not. They are tip flex rods, not stiff rods! The Shimano Keiho Tenkara 33NR is an 18 penny rod. That's a penny softer than the Shimano Keiryu Tenkara 34-38.

For some (many? most?) tenkara anglers, a tip flex rod is more accurate than a full flex rod. Greater line speed can be achieved, which makes the line less susceptible to being blown off target if there is a cross breeze. Also, the cast can be executed with a shorter, quicker casting stroke - little more than a "snap of the wrist," as Dr. Ishigaki described it.

That is NOT how Tenkara no Oni teaches casting, but the muscles that move the wrist are smaller and capable of more delicate, precise motion than the larger muscles that move the arm. Less movement means less to go wrong so your cast is less likely to drift off the intended line. Casting primarily with the wrist works with a 3.3m rod and a relatively short line. You would not want to try it with long rod and a line longer than the rod.

Please understand that I am NOT saying Tenkara no Oni is wrong and Dr. Ishigaki is right (or vice versa). All I am saying is that is one of the reasons the rod was designed as an 8:2. 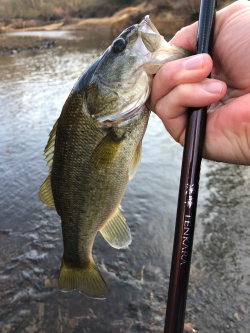 Designed for headwaters, but not limited to headwaters. Jeff R photo.

A tip flex rod with a firm midsection also gives you more positive hook sets. The Shimano website mentions "quick response" - and those little headwaters trout are indeed quick, so your response, and your rod's response have to be quick also!