The Nissin Kawashi is the next level up from Nissin Pro Square. The grip is the same as the Pro Square but the blank is better, with a bit more backbone and a bit more responsive feel.

I received a comment recently about TenkaraBum not carrying all of the Nissin tenkara rods. At one time or another, I've had them all (with the sole exception of the Air Stage Seikon Betchyo Fujiryu, which I ordered for a customer just last week). I haven't always had a lot in stock, and they haven't always been on the website, but by the time that fancy Fujiryu gets here I'll have had 'em all

I learned recently that Gamakatsu has discontinued its tenkara rods. Daiwa has downgraded it's lineup, discontinuing the DSG rods a couple years ago, and the Enshou rods this year, with the exception of the excellent LT39SF. Shimano has discontinued the Mainstream ZE (although there are reports that a replacement is coming, perhaps next year). Nissin, on the other hand, is serious about tenkara and offers more tenkara rod models than any of the other rod manufacturers, with new models two years ago and also this year.

I have not fished with the rod, but with a responsive feel and a penny rating of 12, right about at the seiryu/tenkara border, I am sure it would prove to be a lot of fun with even modest fish.

That said, it is rated for a tippet of up to 1.2 号 (pronounced "go" which in this context is the Japanese term for line size). By way of comparison, Varivas 4X tippet is 1 号 (don't be tempted to go to 3X, though, as it is too strong for the rod). With a 4X tippet, you would be surprised at the size of the fish you would be able to land with the rod. It may bend to the cork, but it will handle all the fish that most American tenkara anglers actually catch.

The Kawashi grip is comfortable for anglers with large and anglers with small hands. The grip diameter is noticeably larger forward and a smaller further back.

The grip screw cap is the same as on the Nissin Pro Square and Nissin Air Stage Honryu models. It is metal and is aggressively knurled for ease of removal (or tightening) with wet or cold fingers. There is a ventilation hole, although I would recommend complete disassembly between uses so the rod can dry thoroughly.

The tip plug is rubber and heavily fluted. It will not fall out when you least expect it, as many of the typical wood and rubber ones can. The fluting allows you to insert the plug when the line is still attached. That is a valuable safety feature if you use either Fuji EZ Keepers or the round Tenkara Line Holders. 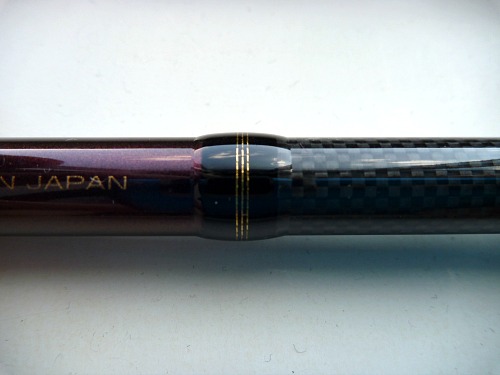 The lower part of the grip section has a clear coat finish that allows the carbon weave to show through. Further up, there is a  subtle majenta color that is also repeated in the smaller sections. It is actually a very handsome rod.

An $8 shipping charge will be added to all orders.

Payment is processed by PayPal but you don't need a PayPal account. You can use your credit card.